Alexander Fleming (1881–1955) was a Scottish doctor and brilliant biologist, best known for discovering penicillin, the world’s first antibiotic (bacteria killer). His research helped to save millions of lives and revolutionised the treatment of wounds and common diseases. Learn more about this intelligent and dedicated scientist, and use our collection of printable resources below to test your findings. 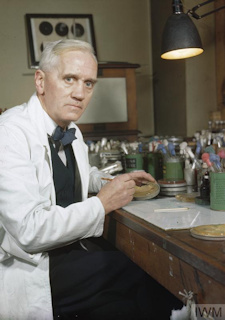 “When I woke up… on September 28, 1929, I certainly didn’t plan to revolutionise all medicine by discovering the world’s first antibiotic, or bacteria killer. But I suppose that was exactly what I did.”

“Tears, saliva and sputum… rid the body of microbes by mechanically washing them away… however, it is quite clear that these secretions… have the property of destroying microbes to a very high degree.”

“One sometimes finds what one is not looking for.”

A Short Biography of Alexander Fleming

Alexander Fleming was born in Ayrshire, Scotland, in 1881. His parents, Hugh and Grace, had both come from farming families. Alexander was one of four children, but had four half-siblings from his father’s first marriage. His father died when Alexander was just seven.

Alexander was an intelligent child and at 11 gained a scholarship to boarding school. He went for two years, but at 13, most of his family moved to London to live with his older brother Tom, while their eldest brother Hugh looked after the family farm. Alexander studied business and commerce at London’s Royal Polytechnic Institution, and went to work in a shipping office, but he loathed it.

Tom Fleming was a doctor, and with his brother’s encouragement and the help of some inheritance money, Alexander applied to study medicine at St Mary’s Hospital Medical School, where he qualified in 1906.

During his student days, Alexander joined the Territorial Army (TA). He thought he wanted to become a surgeon, but instead joined the research team in the Inoculation Department, partly to remain with his TA friends. In 1908, he graduated with a further degree in bacteriology and the gold medal for top student.

Alexander was particularly interested in the body’s natural ability to fight infection. With the outbreak of war in 1914, he joined the Royal Army Medical Corps and began working in field hospitals in France. He noticed many soldiers were dying from infected wounds because the antiseptics used to treat them were weakening the body’s natural immune system. Antiseptics were useful for small cuts, but more harmful for deep wounds. Instead, Alexander recommended bathing wounds in salt water and keeping them clean and dry.

During his time in the army, Alexander married Sarah Marion McElroy, a nurse. They went on to have a son together, Robert, who became a doctor himself in later life.

After the war, Alexander returned to St Mary’s determined to find anti-bacterial substances that could treat infections.

In 1922, Alexander realised that bodily fluids, such as tears, saliva and mucus, had antiseptic properties. He had a cold at the time, and while studying bacteria, a drop of mucus fell from his nose onto the sample. He was amazed to see that around the droplet, bacteria were being destroyed. Alexander went on to test a range of bodily fluids and found they all had an enzyme (protein), which he called lysozyme. This discovery inspired him to find a substance that would destroy even more deadly bacteria.

In 1928, Alexander returned from a month’s holiday with his wife and young son. He noticed that in his absence, samples of Staphylococcus bacteria had become contaminated, and a type of green fungus was growing. What’s more, where the mould lay, the bacteria had been destroyed – just as it had with lysozyme. Alexander called the new substance ‘mould juice’, but later named it penicillin.

Alexander tried to grow more of the fungus to identify its properties. This time it wasn’t an enzyme but a natural antibiotic that could kill different types of bacteria, including those causing meningitis, scarlet fever and pneumonia. We now know that antibiotics prevent bacteria from forming new cell walls, so they can’t grow and spread. But Alexander had difficulties isolating penicillin from the fungus and couldn’t produce it in large quantities for use as a drug.

In the early 1940s, however, a team of scientists at Oxford University, led by Howard Florey and Ernst Boris Chain, developed Fleming’s findings and managed to isolate, grow and purify penicillin into a useable drug, which was then used as an antibiotic during WWII. Alexander was knighted in 1944, and the following year he shared the Nobel Prize with Florey and Chain, for the discovery of penicillin and its use against infectious diseases.

Alexander’s wife Sarah died in 1949, and in 1953 he married Dr Amalia Koutsouri-Voureka, a Greek colleague at St Mary’s. Alexander himself died of a heart attack in 1955 at the age of 73. His ashes were buried in St Paul’s Cathedral, London, in recognition of a man who had paved the way for modern medicine. His findings had saved millions of lives, and would continue to do so in the years ahead. 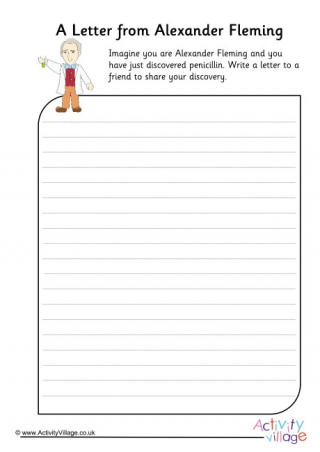 This fun worksheet asks the kids to imagine they are Alexander Fleming, and that they have just discovered penicillin. Can they write a letter to a friend telling them about the exciting discovery? 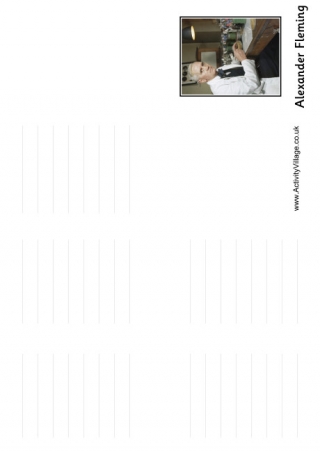 Print and fold this Alexander Flemming booklet, then fill it with facts, research or quotes. You will need our origami booklet instructions. 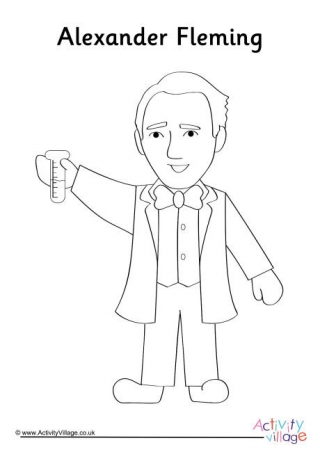 This simple Alexander Fleming colouring page will be a fun addition to a science project for young children. 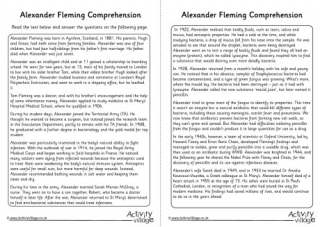 Learn all about Alexander Fleming and his discoveries by reading the text first, then answer the questions at the end! 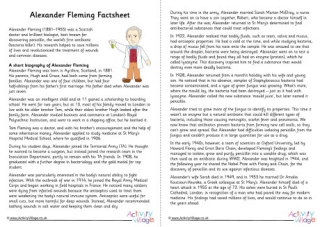 Learn the fascinating story of Alexander Fleming and his scientific discoveries that saved many lives by reading our factsheet. 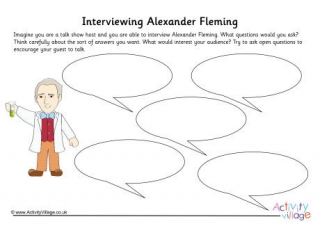 Interviews are a wonderful way to learn about a person that interests you, just by asking questions! This interview worksheet is for Alexander Fleming, best known for his discovery of penicillin. 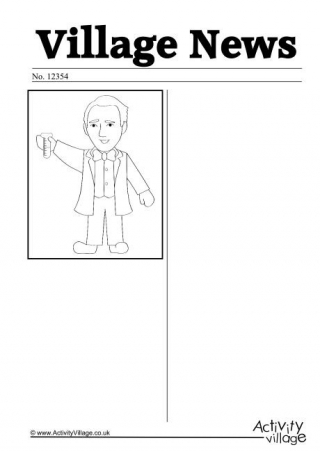 This creative writing exercise asks the children to write a newspaper report about Alexander Fleming - a great way to get the kids putting pen to paper! 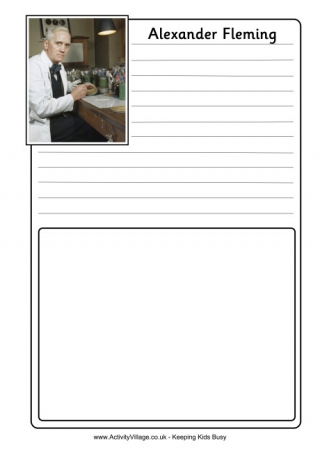 We have two versions of our Alexander Flemming notebooking page. Children can research his life and famous discoveries then write down some facts and information. 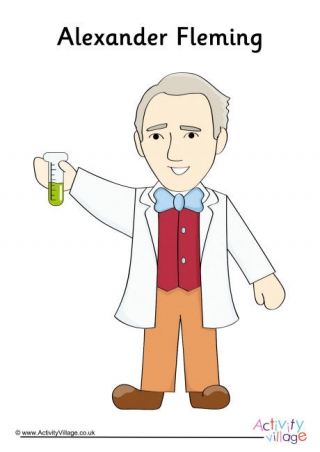 Print out this poster of Alexander Fleming and use in displays. Perfect for introducing younger kids to a science topic, perhaps? 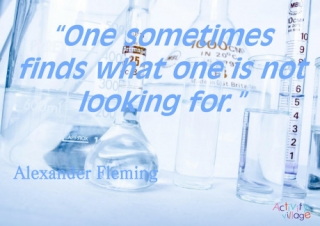 This quote poster is a great starting point for discussing how Alexander Fleming made his famous discovery! Perfect for displaying in the classroom... 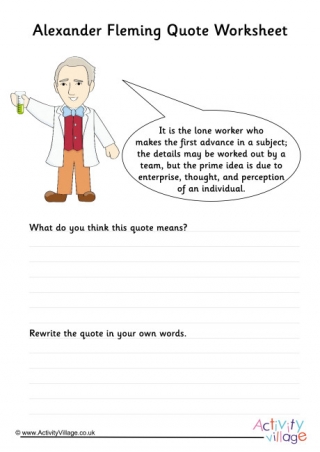 Our simple quote worksheets are a great way to introduce younger kids to famous people. Can the children write about the meaning of a quote by Alexander Fleming then rewrite it in their own words too? 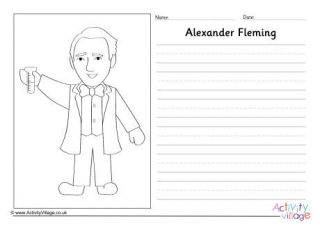 Kids can use our story paper to write about the life of Sir Alexander Fleming, best known for his discovery of penicillin. 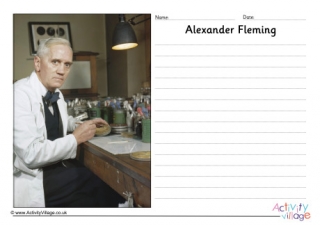 Kids can use our story paper to write down everything they have learned about Alexander Fleming, the Scottish bacteriologist best known for his discovery of penicillin. 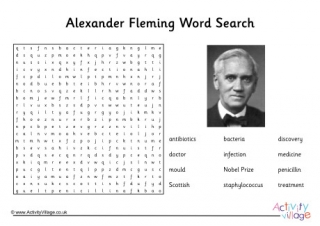 There are 12 words all about Alexander Fleming hidden in our word search grid, so it's quite a challenge! We've included the answers as a separate downloadable file if you need them... 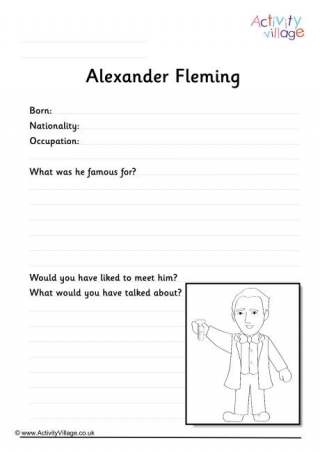 This simple worksheet encourages children to find out a little about Alexander Fleming and to think about what they would talk about with him if they could have met him. 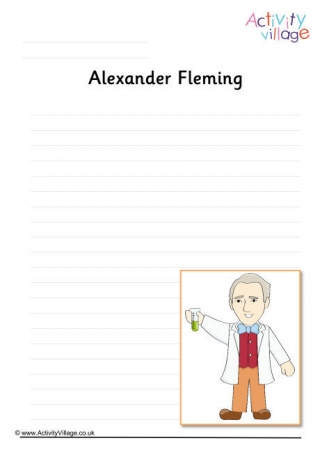 Our Alexander Fleming writing page is designed for younger children to store what they have learned about him and his work, and comes in either colour or black and white. 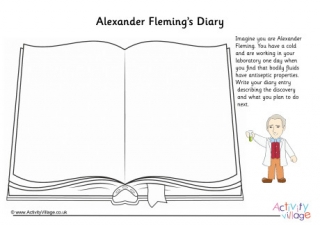 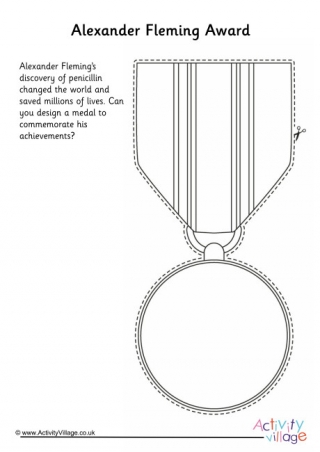 Alexander Fleming revolutionised medicine and his discovery saved millions of lives. He was awarded the Nobel Prize in 1945, but can you design your own medal to commemorate his achievements? 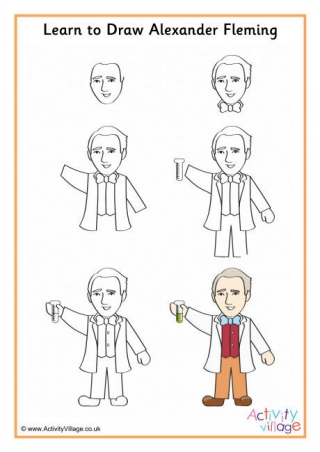 Children can practise their people-drawing skills with this step by step lesson on how to draw Alexander Fleming. 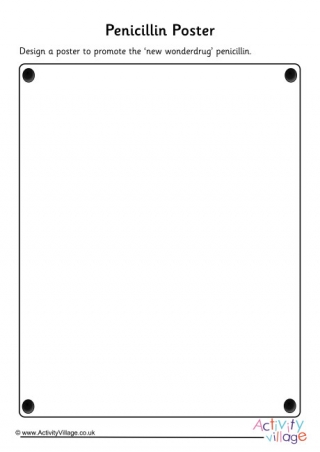 Imagine Penicillin has just been discovered and you are designing a poster to promote this new 'wonder drug'. Perhaps you could write about the different illnesses it will cure? Remember to use some persuasive writing and to make the poster eye-catching if you can! 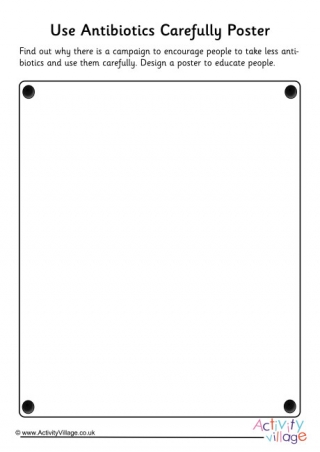 Recently scientists have been encouraging people to take fewer antibiotics and to be more careful if they do need to take them. Can the children find out more about this campaign, and design a poster educating people to use antibiotics responsibly? 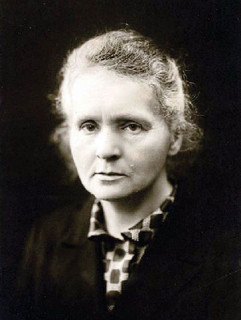