Alexander Graham Bell (1847–1922) was a Scottish-born, American scientist most famous for inventing the telephone. As a young man, Alexander was fascinated by the science of sound and spent many years helping deaf people to speak. His experiments led to the creation of the first practical telephone, which changed the world’s communication forever. Find out more about this brilliant man and use our collection of printable resources below to test your knowledge. 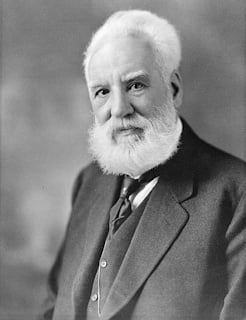 “When one door closes another door opens; but we so often look so long and so regretfully upon the closed door, that we do not see the ones which open for us.”

“Before anything else, preparation is the key to success.”

“The day will come when the man at the telephone will be able to see the distant person to whom he is speaking.”

Alexander Graham Bell was born in Edinburgh, Scotland, in 1847, the middle of three brothers. His father and grandfather (also named Alexander) were both professors of elocution (the art of speaking clearly). Their work was used to teach deaf people how to speak.

Alexander was educated at home at first, but then went to Edinburgh’s Royal High School. When he was about 12, his mother Eliza began to lose her hearing. Alexander became fascinated with sound, and desperately wanted to help his mother. He would tap on her arm with his own ‘finger language’ to help her understand conversations around her. He was also an excellent piano player and would regularly play for his mother.

Alexander was a keen inventor from a young age. When he was 12, he built a wheat ‘dehusking’ machine for his neighbour’s family who had a flour mill. Then at 16, Alexander and his older brother Melville created a robotic head that could almost create the sounds of the human voice.

On leaving school, Alexander studied acoustics (the science of sound) at the University of Edinburgh, and went on to teach elocution and music in Bath, Somerset. Tragedy struck the family in the late 1860s, however – by 1870, both Alexander’s brothers had died from a disease called tuberculosis. At the age of 23, Alexander, his parents, and his brother’s widow moved to Canada to start a new life there.

A year later, Alexander took a job in Boston, USA, and became famous for his work helping deaf people to speak, particularly deaf-mute children. In 1872, he founded a school to train other teachers the techniques that his father had developed before him.

Alexander’s work with the deaf led him to experiment with hearing devices, and the possibility of using electricity to transmit sounds. By 1875, he had invented a type of electric telegraph (messaging machine) that sent signals in the form of musical notes down a telegraph wire. He tried to improve his design and wondered if he could send the sounds of a human voice down the wire instead. With the help of his assistant Thomas Watson, this is exactly what he did – creating the first practical telephone.

At the time, other scientists were working along similar lines, and Alexander had to rush to patent his invention. In 1876, three days after a patent was granted, Alexander spoke the first words down a telephone to his assistant – “Mr Watson – Come here – I want to see you.”  Within a year, Alexander had formed the Bell Telephone Company, selling telephones to the public. Ten years later, more than 150,000 people in the US owned a telephone and Alexander had become a wealthy man.

Alexander married Mabel Hubbard in 1877. Mabel had lost her hearing at the age of five after a severe bout of scarlet fever. She had been a pupil at one of Alexander’s schools for the deaf, and her father became the first president of the Bell Telephone Company. Alexander and Mabel had four children together, although two sons died in infancy.

Alexander divided his time between Washington, D.C. and a house he had built in Nova Scotia, Canada. He continued with other scientific experiments and worked on many devices, such as hydrofoil boats, flying vehicles, metal detectors, the audiometer (a device for detecting hearing problems), a device for locating icebergs, and the development of air conditioning and alternative fuels. In 1888, Alexander was also one of the founding members of the National Geographic Society, and became its president for some years.

Alexander died in 1922, aged 75, at his home in Canada. He had suffered from diabetes for some years. After his funeral, phones across the US were silenced for a short period, in recognition of a man who had revolutionised the world’s communication and changed people’s lives forever. 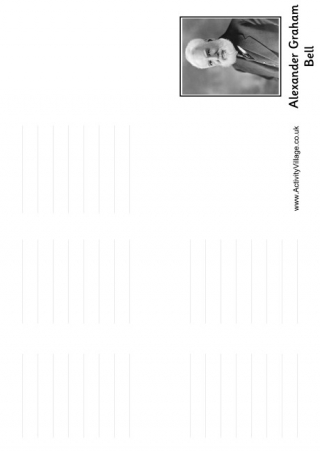 Print and fold this little booklet and use it to capture your research on Alexander Graham Bell. You'll need our origami booklet folding instructions. 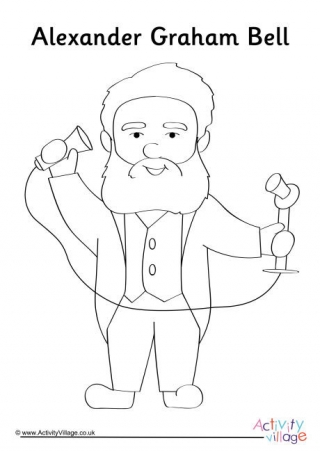 This cartoon-style drawing of Alexander Graham Bell, the inventor of the first telephone, is a perfect activity for younger kids. 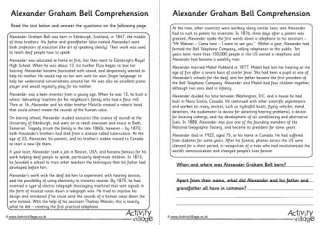 Comprehension worksheets test the ability of older children to understand a reading passage and answer questions based on the text. This comprehension is all about Alexander Graham Bell.

Do you know why Alexander Graham Bell became fascinated with sound and what his first invention was? You can find out by reading our factsheet, plus lots more! 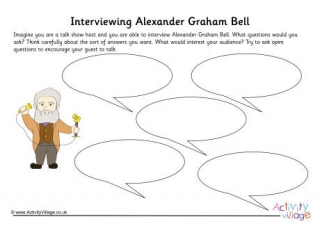 Can the kids imagine they are a talk show host and that they are interviewing Alexander Graham Bell? What sort of questions would they ask? 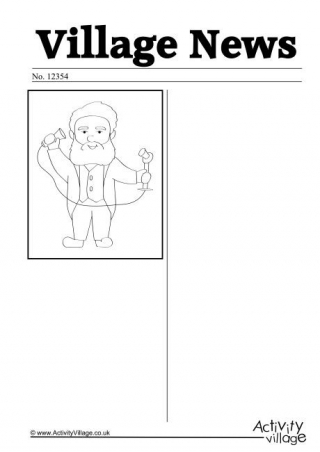 The kids can use our Alexander Graham Bell newspaper writing prompt to describe his life and achievements, and they can colour in the picture of him if they like too ... 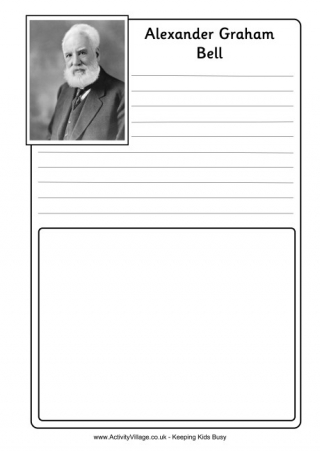 Use these helpful notebooking pages to record what you find out about Alexander Graham Bell. 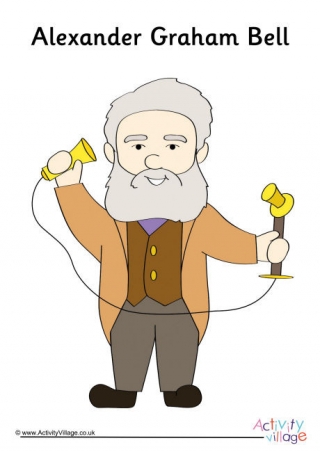 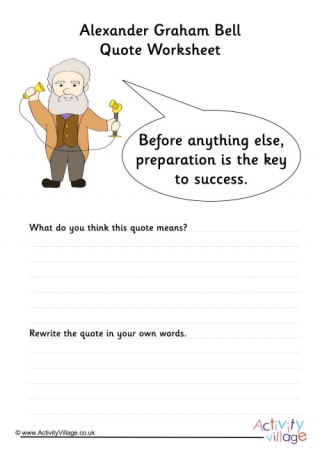 "Before anything else, preparation is the key to success." Can the children write what they think this quote by Alexander Graham Bell means, then try to rewrite the quote themselves? Use this fun story paper to write about the life of Alexander Graham Bell, the inventor of the telephone, or to write down some facts about his inventions. Alexander Graham Bell was a Scottish inventor and engineer who is credited with inventing the very first telephone. The kids can write down everything they have learned about him on our handy story paper. Print out this blank timeline worksheet then get the kids to fill in the important events in Alexander Graham Bell's life. Our fun fact-finding worksheets are designed to prompt children to do a little research on their own, and then fill in what they have discovered. Then we ask them to think about what they would like to discuss with Alexander Graham Bell if they met him... What do your children know about Alexander Graham Bell? They can write up their findings on our writing page. This fun worksheet asks the children to image how Alexander Graham Bell and Thomas Watson felt the first time they heard a telephone working! Can they describe how both men felt in this diary? Over the years, the way we communicate has changed dramatically. This interesting worksheet asks the kids to explore the differences between communication today and in 1850, before the invention of the telephone... We all know how useful telephones are now, but back when they were first invented people weren't sure if they even wanted one! Design a poster advertising the new invention of the telephone, explaining to people why they would want to use it. We think the kids will love this fun worksheet, all about designing a future telephone! Can they look at the pictures of phones from the past, then draw a design for a future telephone, labelling their design too? Can the children design their own medal to celebrate the achievements of Alexander Graham Bell using the template we've provided? Follow our step by step, printable tutorial to learn how to draw your own picture of Alexander Graham Bell.