Alexander the Great (356 BC–323 BC) was one of the most famous fighters and rulers in ancient history. Although he died at just 32 years of age, he managed to conquer and create one of the largest empires of all time. His inspiring leadership also helped the Greek culture to spread from the Mediterranean to Asia, and brought the east and west together in the sharing of ideas, language, trade routes and other ventures. Learn more about this inspiring classical hero and use our collection of printable resources below to test your knowledge. Fun fact: When Alexander was a child, he tamed a wild horse called Bucephalus. No one dared to go near the creature, but Alexander realised Bucephalus was just afraid of his own shadow. Alexander tamed him by turning his head towards the sun so his shadow was behind him. Bucephalus would only let Alexander ride him, which he did, in every battle until the horse died of old age. Alexander was so fond of this brave and courageous creature that he named a city – Bucephala – after him.

“There is nothing impossible to him who will try.”
Alexander the Great

A Short Biography of Alexander the Great

Alexander was born in Pella, Macedonia (Ancient Greece), in 356 BC to King Philip II of Macedonia and his wife Olympias. As a child, Alexander was taught to fight, to ride a horse and to hunt, alongside more traditional subjects.

When Alexander was 13, his father hired the great philosopher Aristotle to teach him. Alexander began to learn about Greek culture as well as science, politics, philosophy and literature. Aristotle gave Alexander a copy of the Iliad, a book by Homer, which he later carried with him in every battle. It is said that the stories within this book inspired Alexander to become a war hero.

Alexander became a soldier when he was 16 and began to join his father in important battles. When Philip II was murdered in 336 BC, Alexander inherited the throne, at the age of 20. Philip had built a strong empire in Ancient Greece, and his son began to conquer more lands to expand the empire eastwards.

Alexander never lost a battle, and his conquests eventually led to an empire stretching from Greece to north-western India. He became known as Alexander the Great for his military strength and his leadership skills. In every country he conquered, Alexander was known to respect the local people as well as their customs and religions. Before long, Alexander had become the King of Persia, Egypt, Babylon and Asia.

In 327 BC, Alexander married Roxana, the daughter of an Iranian prince. Later he also married Stateira, the daughter of the former King of Persia, to strengthen his rule there. This was not unusual at the time. His father Philip was said to have had seven wives.

Alexander was keen to continue his conquests – perhaps all the way to China – but after years of fighting, his soldiers were tired and weary. They wanted to go home to their wives and children. To avoid a rebellion, Alexander agreed and his army fell back.

Alexander didn’t make it home, however. When he reached Babylon (an ancient city in modern-day Iraq), he became very sick and died. He was just 32. No one knows what caused his death – some think it was a fever such as malaria, while others suspect it was poisoning. Alexander’s son (also called Alexander) was born to his wife Roxana a few months later.

After Alexander’s death, his empire was divided between four of his generals. But they quarrelled and fought for years and the empire began to crumble. Alexander’s legacy, however, lived on. The lands that were once his still reflect the Greek culture that Alexander introduced all those years ago. And the 20 or so cities that he founded honouring his name – such as Alexandria in Egypt – still bear witness to his impressive reign to this day. 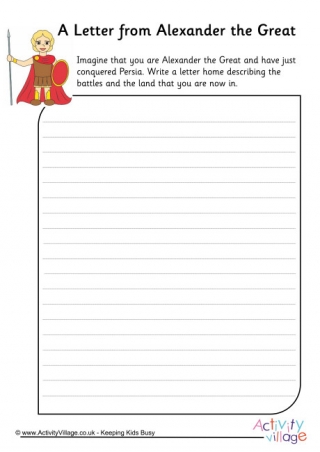 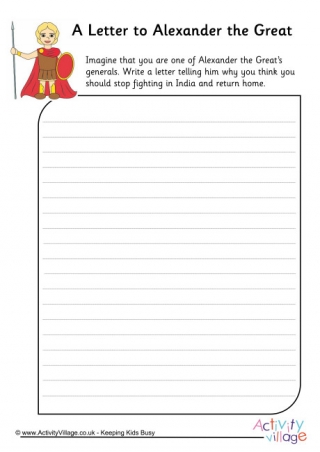 Alexander the Great had one of the biggest empires in history, but by the time he attempted to conquer India his soldiers desperately wanted to return home. 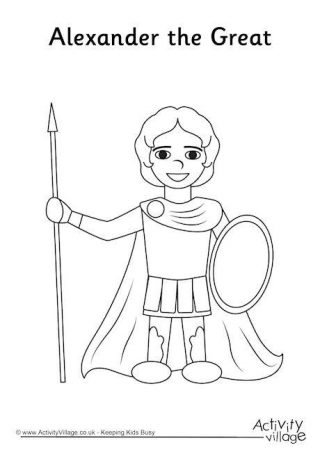 Here's a simple colouring page for younger children of Alexander the Great, dressed for battle. 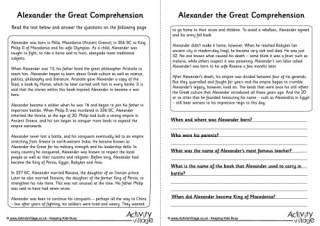 The aim of comprehension worksheets is to ask older children to read some text then answer questions to demonstrate what they have learnt and understood. This comprehension is all about Alexander the Great. 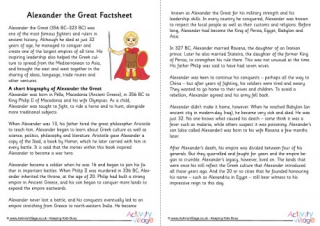 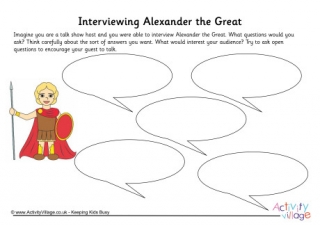 Here's a fun learning activity for the kids about Alexander the Great. Can the children imagine they are a talk show host and they are interviewing this Ancient Greek king? What sort of questions would they ask him? A good way to get the kids thinking about open questions. 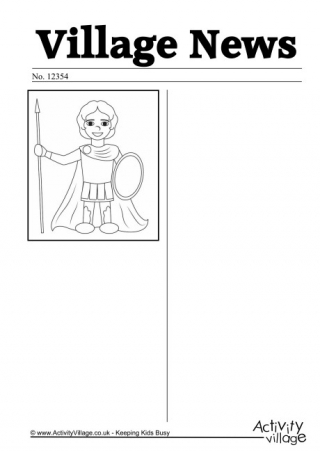 The kids can use our Alexander the Great newspaper writing prompt to describe his life and achievements, and they can colour in the picture of him if they like too... 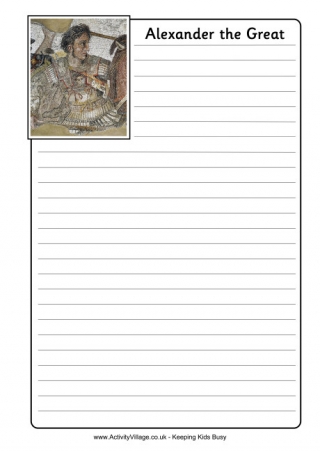 Children can use these notebooking pages to record what they've found out about the great Ancient Greek king, Alexander the Great. 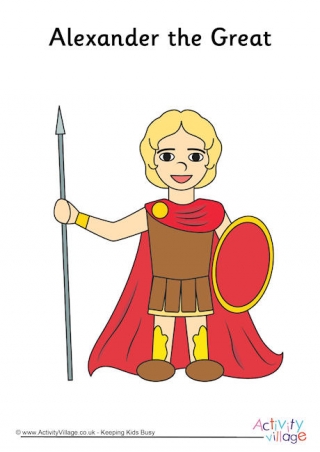 Here is a poster to print of Alexander the Great, the Greek hero who conquered a huge empire.  As well as looking good on a classroom wall it would make a great project cover. 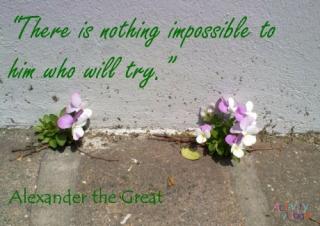 "There is nothing impossible to him who will try." This quote by Alexander the Great is really quite inspirational, and our quote poster is great to print and display in classrooms, at scout and guide groups, sports clubs or just at home...anywhere where a little inspiration is needed! Use this story paper to write what you know about the life of Alexander the Great, or maybe describe what happened in one of his battles? We have lined and handwriting lined versions to choose from below. 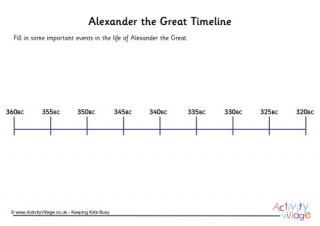 Print out this blank timeline worksheet then ask the children to fill in the important events in Alexander the Great's life - perhaps it's the first time they've used a BC timeline? Here's a simple worksheet, aimed at younger children, to help them record what they have learned about Alexander the Great. They can have fun thinking about what they would say to him if they met him! Choose from colour or black and white versions. Our Alexander the Great writing page is perfect for children to record their own research. Do they know what he did and why we remember him today? Available in colour or black and white.