Learn a little about the tiny principality of Andorra, and enjoy our collecton of flag printables with the kids. 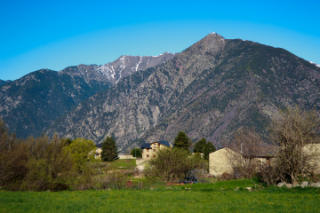 About the Andorra Flag

This Andorra flag has been in use since 1866, and consists of a tricolour of blue, yellow and red with the coat of arms of Andorra in the centre. The motto on the coat of arms reads "virtus unita fortior" which is Latin for "virtue united is stronger".

The flag purposely borrows its colours and tricolour design from the French and Spanish flags, as these two countries are its neighbours. Just print and fold this sheet and you'll have your own Andorra themed booklet. The colourful flag graces the cover and inside you can choose a version with lines or a version which is blank. These bookmarks can be coloured in and then used in school books. Or maybe you could print the colour version and use instead of stickers as rewards? Kids can have fun colouring this flag of Andorra. They will need your red, yellow and blue pens. Perhaps you could point out the two tiny cows on the coat of arms! 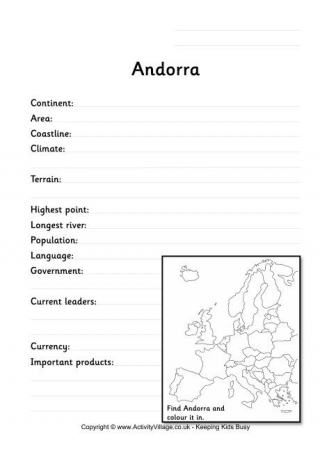 Find out some facts about Andorra to fill in this fact worksheet, which also includes some location practise. All our jigsaws are easy to make - just use our jigsaw instructions and cutting guides. This one has the flag of Andorra which is very colourful and has an interesting coat of arms in the centre. We have three sizes of Andorran flag to print and cut out for projects at home or at school. Andorra is quite small and tricky to find on a map of Europe! Younger kids can try the guided version of our worksheet, and the older children can attempt the more challenging blank version. Andorra is a tiny place between France and Spain. There is a lot of space to write and draw all about it on this notebooking page. If you've got a lot of writing to do, print the version with just lines. Andorra is quite a small country, so we've coloured it in brighgt red so the kids can locate it more easily on this map of Europe. Find out some simple facts about Andorra and record them on this worksheet, which includes a location activity.