Aretha Franklin (1942–2018) was a multi-award winning American singer, songwriter and pianist. With her powerful voice and impressive vocal range, Rolling Stone magazine declared her the greatest singer of all time, with a career spanning seven decades. Aretha’s unique voice also became the sound of America’s civil rights movement in the 1950s and 60s. Find out more about this legendary ‘Queen of Soul’ and enjoy using our printable resources below. 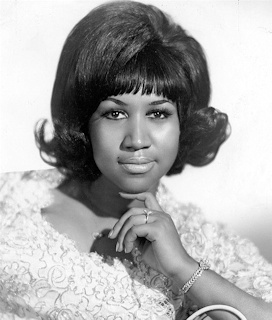 "It really is an honour if I can be inspirational to a younger singer or person. It means I’ve done my job.”

“I’m the lady next door when I’m not on stage.”

“Sometimes, what you’re looking for is already there.”

A Short Biography of Aretha Franklin

Aretha Franklin was born in Memphis, Tennessee, in 1942. She was the third of four children born to Clarence Franklin and his wife Barbara, but also had two older half siblings. Barbara was a pianist and gospel singer, while Clarence became one of America’s most famous Baptist preachers, as well as a civil rights activist and talented singer himself.

The family moved to Buffalo, New York, when Aretha was two, and relocated to Detroit, Michigan, two years later. Aretha’s father befriended many famous musicians, such as singers Sam Cooke and Ray Charles and gospel singer Mahalia Jackson. All had a huge influence on Aretha as she grew up. By the time Aretha was six her parents had separated and her mother moved back to Buffalo. Aretha’s father and paternal grandmother, Rachel, raised her. Tragically, four years later, Aretha’s mother died from a heart attack.

Aretha was a gifted musician from an early age, teaching herself to play the piano by listening to jazz music. She also began to sing gospel at her father’s church. By ten, she was singing solos and at 12, she dropped out of school to tour with the church’s gospel group, under the management of her father. By 14, Aretha had recorded her first album at her father’s church ‘Songs of Faith’ (1956). Then at 18, with her father’s blessing, Aretha moved to New York where she eventually signed with Columbia Records. She released the album ‘Aretha’ (1961) and that same year married her manager, Ted White.

In 1966, Aretha left Columbia Records and signed with R&B label Atlantic. She had huge success with the single ‘I Never Loved a Man (The Way I Love You)’, followed by a string of hits including ‘Think’, ‘Chain of Fools’, ‘Say a Little Prayer’ and ‘(You Make Me Feel Like) A Natural Woman’. Another track ‘Respect’ reached number 1 on both the R&B and pop charts internationally and won Aretha her first two Grammy Awards. Aretha’s sisters Erma and Carolyn were both backing singers on the record.

In the 1980s, Aretha reinvented her career with a role in the film ‘The Blues Brothers’. Having left Atlantic Records she signed with Arista, with new pop albums such as ‘Jump To It’ (1982), ‘Who’s Zoomin’ Who?’ (1985) and ‘Aretha’ (1986). These included chart-topping duets with stars such as George Michael and Annie Lennox. However, the 1980s were a sad time for Aretha, with the end of her six-year marriage to actor Glynn Turman, and the death of her father who had been critically injured in a burglary five years earlier.

Aretha received many awards during her lifetime, including 18 Grammy Awards, three special Grammys (and 44 nominations). The 1998 Grammy Awards were also particularly memorable when opera singer Luciano Pavarotti pulled out due to sickness and Aretha famously stepped in to perform a powerful rendition of ‘Nessun Dorma’ to a standing ovation. In 1979, she received a star on the Hollywood Walk of Fame and in 1987 became the first female artist in the Rock and Roll Hall of Fame. She was also awarded the Presidential Medal of Freedom by President George W Bush in 2005.

Much of Aretha’s life story was told in her 1999 autobiography ‘Aretha: From These Roots’ and it was revealed in 2018 that actress Jennifer Hudson plays Aretha in an upcoming film about her life. Aretha had four sons, two of whom were looked after by her sister and grandmother during her early career.

In 2017, just before her 75th birthday, Aretha announced it would be her last year of touring. She died the following year aged 76 from pancreatic cancer, surrounded by family and friends at her home in Detroit. As guests arrived for her televised funeral, more than 100 pink cadillacs lined the streets of Detroit reflecting the lyrics of her 1985 hit ‘Freeway of Love’. Speakers and performers included former US president Bill Clinton and singer Stevie Wonder – all paying their respects to a remarkable woman. 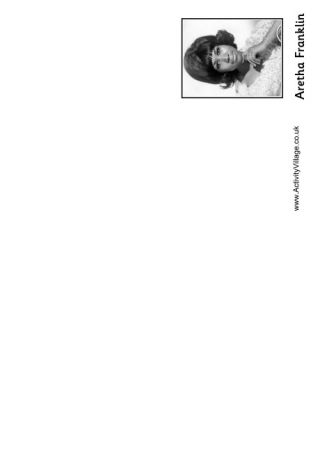 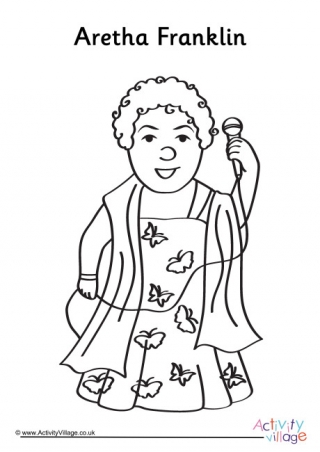 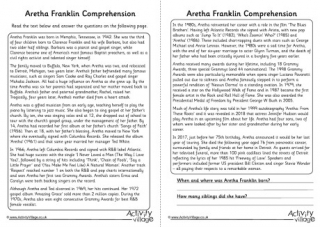 This interesting comprehension worksheet asks the kids to read some text about soul queen Aretha Franklin, then answer some simple questions at the end based on what they have just read. 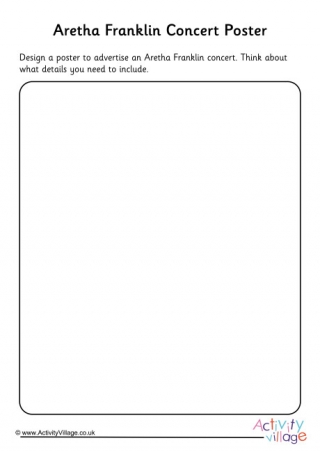 Can the kids design their own poster to advertise an Aretha Franklin concert? They should try to make it as eye-catching as possible! 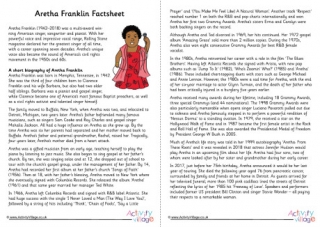 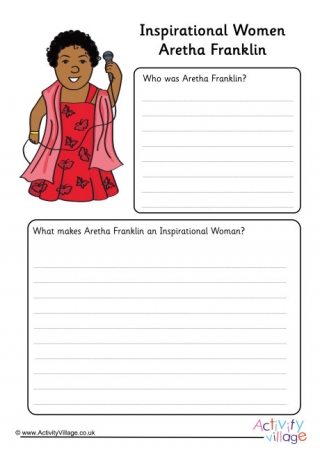 There was much more to Aretha Franklin than being a fantastic singer. Can the children find out what makes her an inspirational woman? 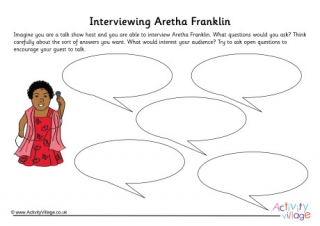 What would you ask Aretha Franklin if you got the chance? You could maybe do some research on previous interviews with her to get some ideas... 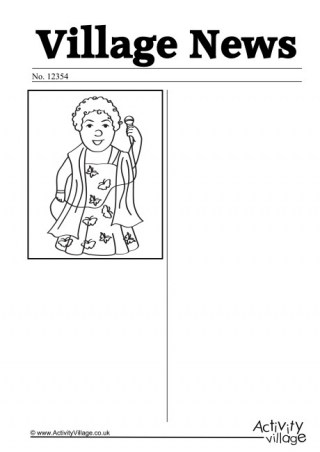 Choose an event or achievement in Aretha Franklin's life and write about it on this newspaper writing prompt. 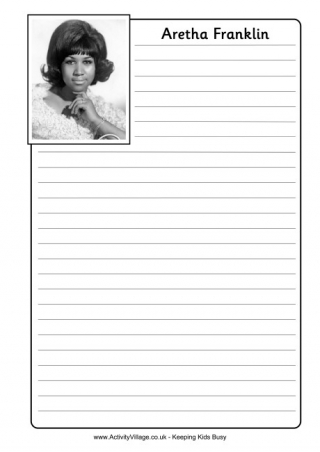 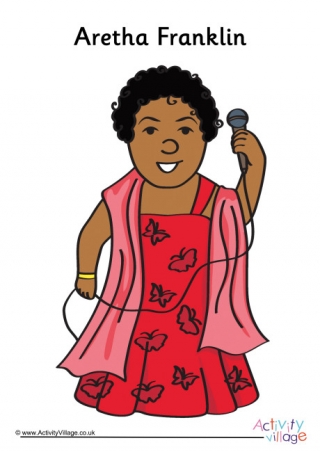 Print this poster of soul diva Aretha Franklin to use in your displays. 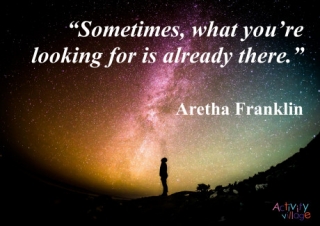 This beautiful poster has a magical, starry feel to it - perfect for an inspiring quote by Queen of Soul, Aretha Franklin. 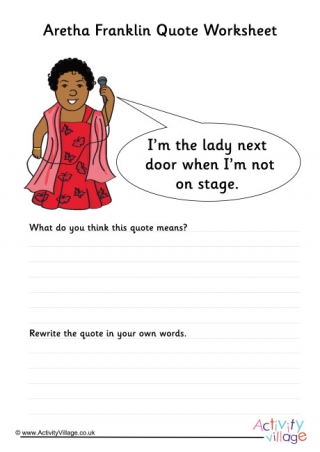 "I'm the lady next door when I'm not on stage." This is a fabulous quote from Aretha Franklin, but what does it mean? Write down your thoughts on this worksheet. 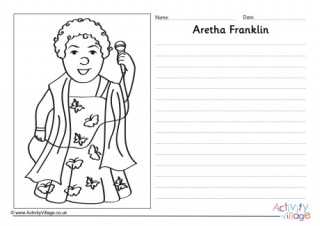 We have two versions of our Aretha Franklin story paper - one with lines and one with handwriting lines, perfect for all kinds of writing projects about the Queen of Soul. 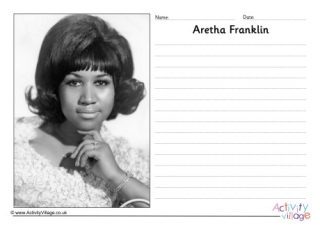 This is the second of our Aretha Franklin story papers and features a photograph of the lady herself! 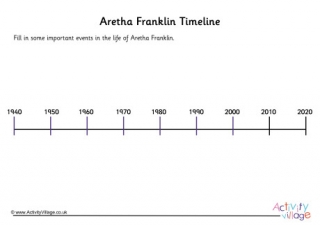 Use this timeline worksheet to mark down some of the most memorable moments in Aretha Franklin's incredible career in music. 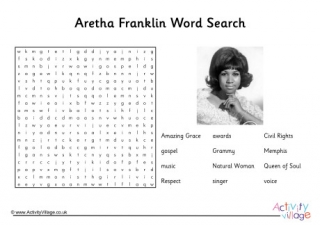 We've hidden a couple Aretha Franklin's hit songs in this wordsearch grid, along with some other words associated with the famous singer. 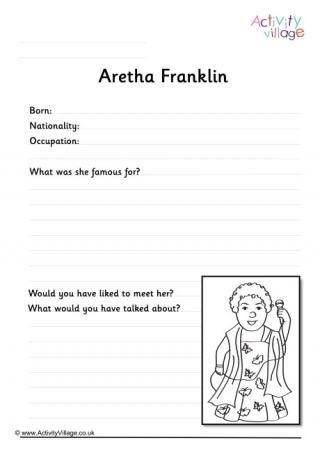 This simple worksheet is a great introduction to Aretha Franklin for younger kids. Choose from one of two versions below: colour, or black and white. 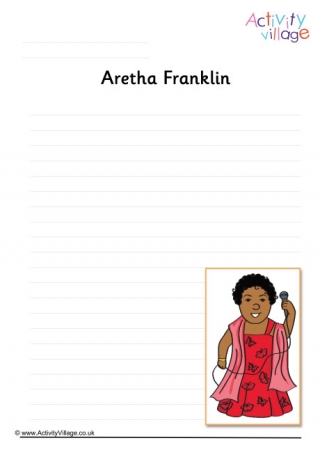 Use our Aretha Franklin writing page to write about her incredible career in music, or perhaps for copying down some of her song lyrics? 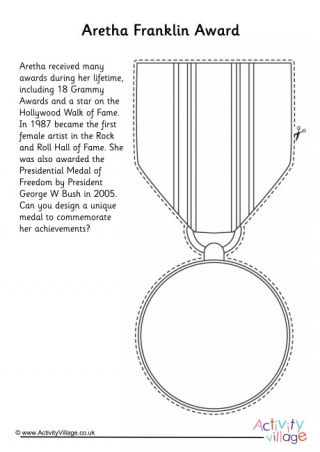 Aretha Franklin won an impressive 18 Grammy awards, but what do you think she should have a medal for? Design your own award on this worksheet... 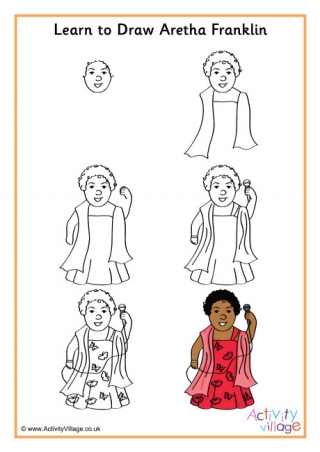 Learn how to draw Aretha Franklin, also known as the Queen of Soul, with our easy step-by-step guide. 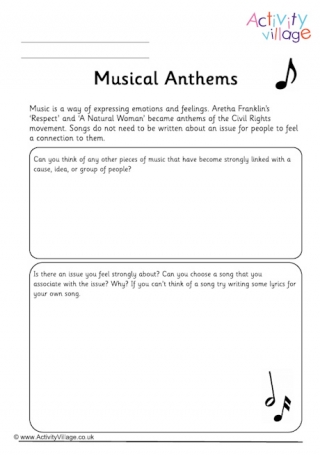 What makes a song become a musical anthem? 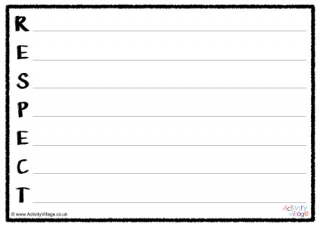 Here's a simple acrostic poem printable for inspiring creative writing. Use the first letters in RESPECT to start each line of the poem. 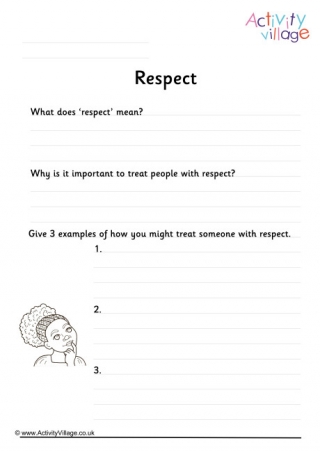 Here's an interesting worksheet with a musical twist! Aretha Franklin sang all about "respect" on her hit song, but can the children write about the meaning and importance of respect on this worksheet? 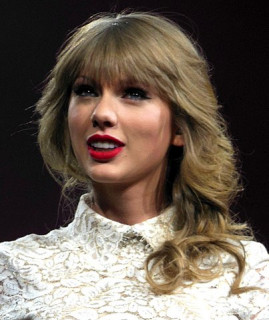