Find out some interesting facts about Bahrain and enjoy our Bahrain flag printables and worksheets with the kids. The skyline of Manama, Bahrain The Bahrain flag has an unusual zigzag pattern separating the white from the red side. When several Arab countries signed the General Treaty of Peace with the UK it was decided that the signing countries should include a band of white to represent peace. The government of Bahrain wanted the flag to be unique from that of other members of the peace treaty, so decided upon the zigzag design. The current flag of Bahrain was officially adopted on February 14, 2002. 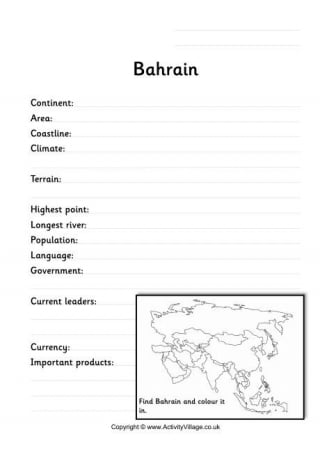 Our country fact worksheets are a great accompaniment to topic work on countries, continents or as fun geography tests. This fact worksheet is all about Bahrain! Here is a colouring page of the Bahrain flag, ready to be coloured in with its striking red and white design. The Bahrain flag is simple and distinctive. You can print it out in four different sizes with the PDF below Choose from two location worksheets -one (guided) designed to help your children learn where Bahrain is on a map of Asia, the other (blank) designed to test their recall. When you are learning about Bahrain with the kids, you could start with this simple worksheet, ready to print.