Batman has always been a popular costume for young boys, and it is not difficult to make yourself with a few supplies. These days you will have to decide between a plain black modern batman outfit, or a grey, black and yellow traditional batman outfit!

The modern batman is basically the same as our bat costume, but with a different head and the addition of a gold belt.

Follow the bat costume instructions to make the bat wings and outfit.

Modern Batman wears a wide gold with the batman logo in black on the belt buckle. To make this you can either adapt one of your own belts, cutting the buckle out of black card and sticking it on with sticky-tape, or you can spray paint a strip of cardboard or buckram (pelmet material from the haberdashery) gold. Make the buckle with a circle of gold-sprayed card and a black batman logo cut out of a scrap of black card or felt.

In addition, you will need a black woolly hat and a strip of felt to make the head gear. Cut a strip of black felt about 2 inches wide - wide enough to go across your child's eyes - and snip two eye-holes out of it. Now stitch it carefully to the brim of the woolly hat so that it fits in position. Call two small pointy bat ears and sew to the edges of the hat so that they lie flat to the side of the head and point directly upwards.

Traditional batman wears a pair of light grey tights, leggings or sweatpants, a light grey long sleeved T-shirt or sweatshirt, a pair of black knee-high socks, and a long black cloak. Add a wide, bright yellow webbing or strapping belt and print out the yellow and black batman logo (do a Google image search to find it) to stick on your child's chest. Make the head gear as described above.

The wings on this costume mean that younger kids particularly enjoy wearing it! It is just a question of two measurements, some cutting and a handful of safety pins or a few quick stitches.. 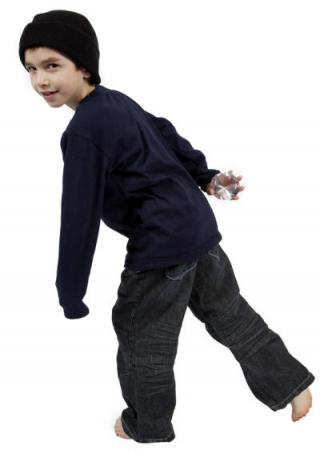 This burglar costume is a fun fancy dress costume for kids at Halloween or all year round - and it is very easy to put together. 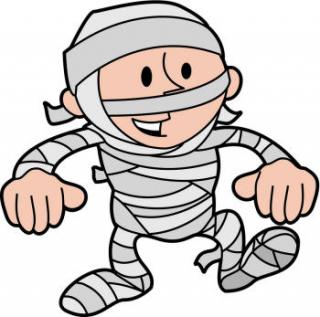 A mummy costume is easy to put together and great fun for children, but it does have its downsides so think carefully before you agree to it!