Both my sons really enjoyed supporting England’s football team in the World Cup last summer (and not just because we did quite well for once!) Major sporting events bring people from different nationalities and cultures together from around the world, and it can be fun to learn about the different countries taking part and to follow how well they do in a competition.

My youngest son is sport crazy, and this summer there are two major world sporting events for him to enjoy – The FIFA Women’s Football World Cup, and the 2019 Cricket World Cup.

My son was already a keen footballer and basketball player, but this year he’s also joined an after-school cricket club which has sparked his interest in the sport. The 2019 Cricket World Cup is also being held in England and Wales, so it’s the perfect time to get the kids involved.

We’ve had a lot of rainy days here recently, so we’ve been trying a few of the cricket resources on ActivityVillage when it’s been too wet to go and play outside. You can find all the activities below here.

The first activity my son chose was designing his own cricket kit. The World Cup moved from players wearing all-white kits to coloured kits in 1992, and we now see all kinds of brightly coloured designs and patterns during matches! My son really enjoyed getting creative with this activity and choosing a colour scheme for his kit. 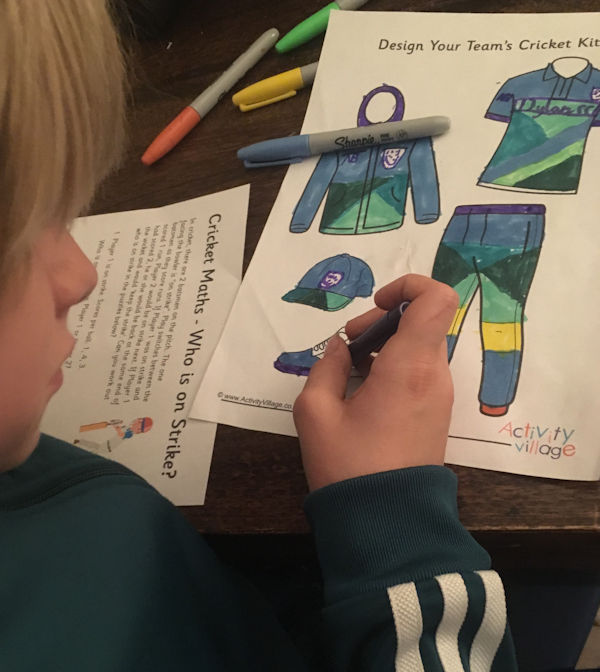 Designing his own cricket kit 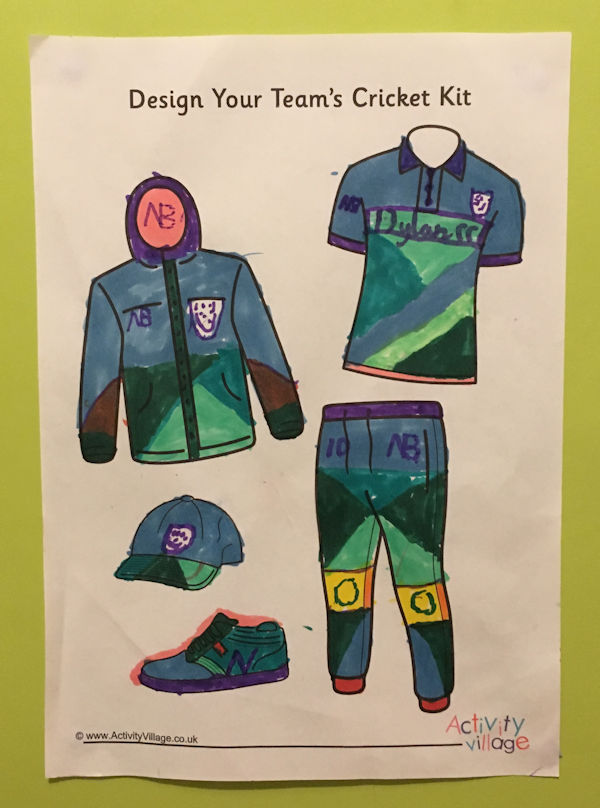 His next activity involved doing a bit of research to find out the location of previous Cricket World Cups and the winners each year. This was a fun way for him to do a little bit of independent research, and he also learned how to spell some tricky country names such as Sri Lanka and Bangladesh! 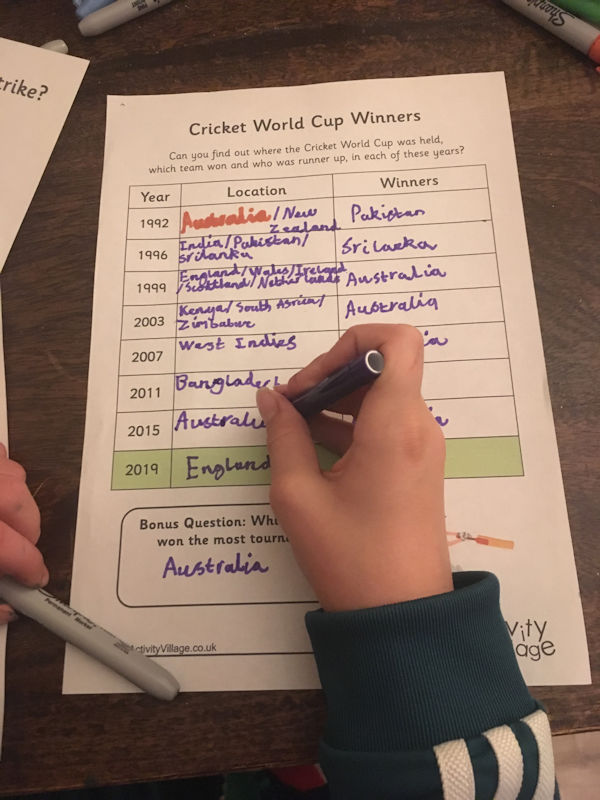 Playing and watching cricket is teaching my son lots of new skills, both physical (catching and throwing), and mental (new rules and terminology). There’s quite a bit of logic and maths skills involved in cricket, and my son tried a puzzle which asks the children to work out which player is on strike after a certain number of runs. This is a great activity for older kids, and my son really enjoyed the challenge. 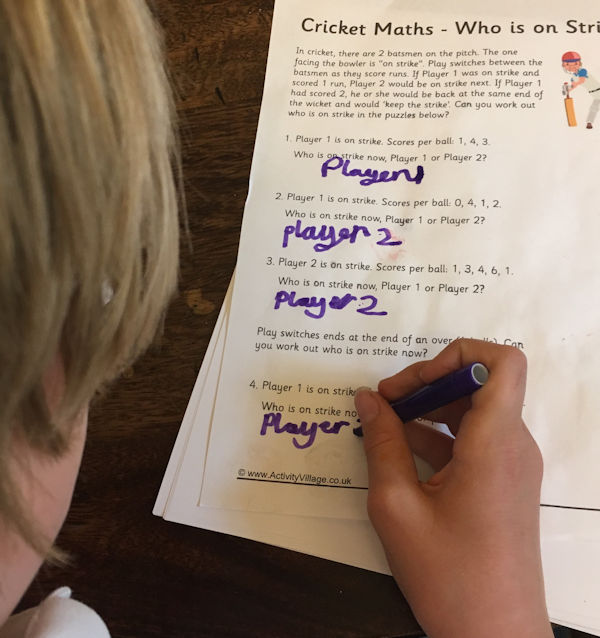 Working out which player is on strike!

World sporting events are perfect for getting the kids involved in a little geography practise, and my son tried a worksheet where he had to place the cities holding World Cup matches on a map of England and Wales. He knew a few of the locations already, and then he did a little research to find the ones he wasn’t sure about. You could expand this activity and ask the kids to find out the names of the venues in each city (The Oval, Old Trafford etc.). 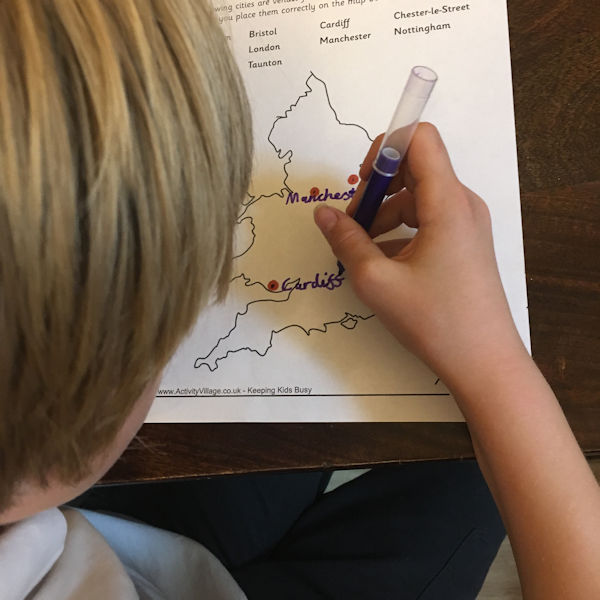 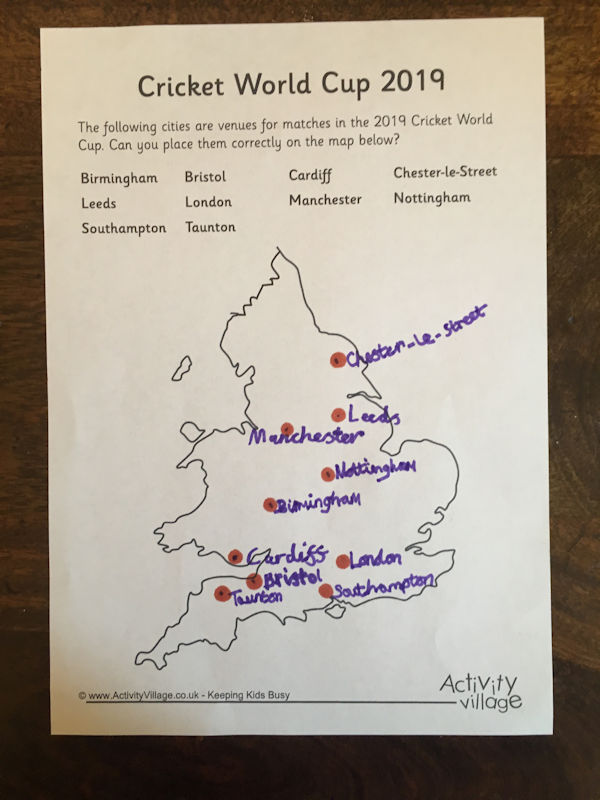 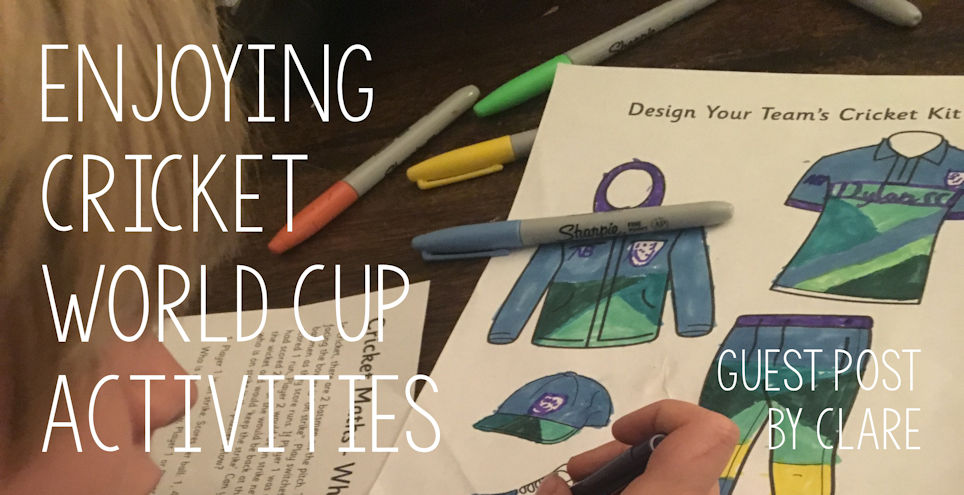 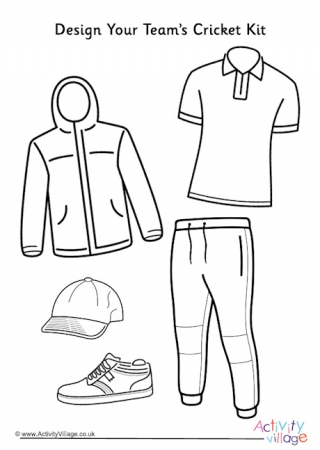 Whether the kids are getting ready to enjoy the Cricket World Cup or a school match, or stuck indoors on a rainy summer afternoon, this "design your team's cricket kit" printable might be fun for them. 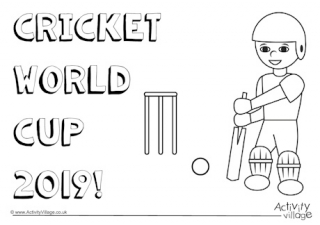 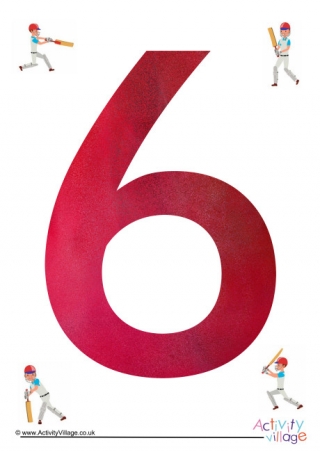 Hold up this fun poster every time your team hits a 6! Just what you need when watching a cricket match...