Shelly has some fantastic ideas for using the printable 3D nets available to download and print from Activity Village. Read the rest of Shelly's guest blog post to find out more...

During one of our recent audio book listening sessions, the kids wanted to decorate some of the 3D nets (find them here or here). We tend to do arty-type activities while we listen to audio books. So we printed out a few and they had a go with our felt-tip pens. 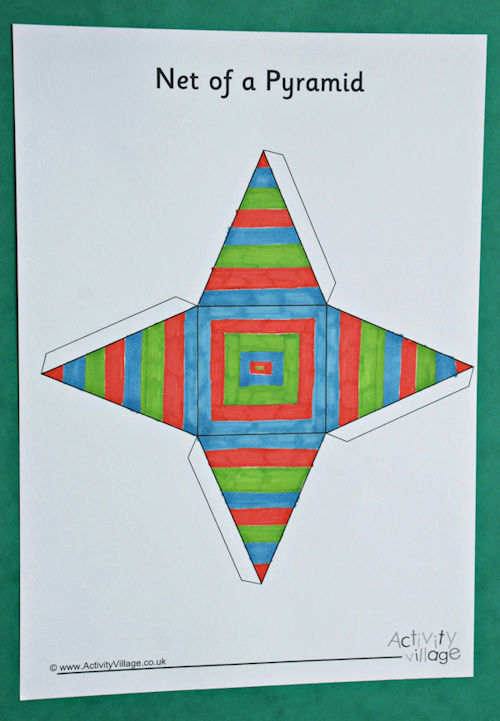 The nets are very easy to cut and stick together so both my kids managed to complete the nets by themselves. So easy mom art session! 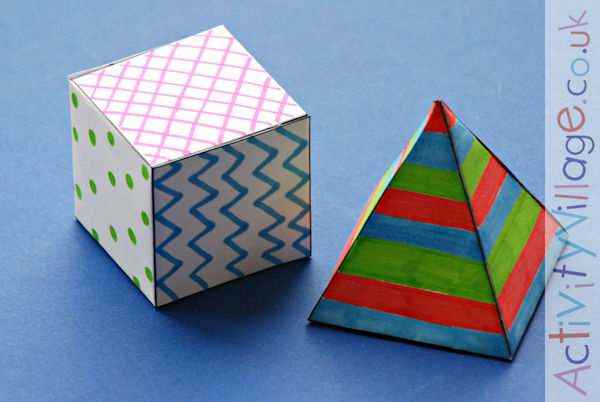 My daughter thought it would also be fun to use some of the crafting jewels that she has and printed out a few extra pyramids onto coloured card. And even added a fun face to one of her pyramids. 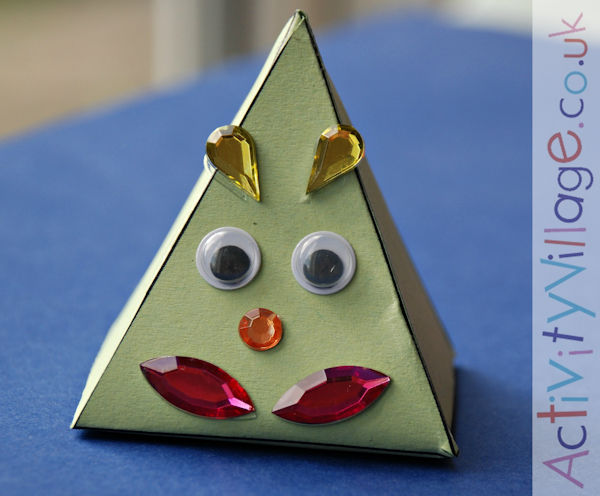 Having fun with the pyramid nets - a funny face

You really could use anything out of your crafting supplies with these nets – I personally think some coloured buttons and possibly a few crafting feathers could be fun – it could almost be like a bird.

While we were decorating a few of the nets my son came up with the idea of using the cube net to create his own maths dice.  He has been learning his time tables recently and is not a fan of practising them with traditional worksheets.  But he does like doing maths games/ activities and we have practised sums before with dice, so we thought we could try the same with his times table.  We custom-made the dice so it included the times tables that he has learnt so far. (Although if I had to redo it I would probably leave out the 2x and 10x and rather have two sides with the 6x and 4x on them). 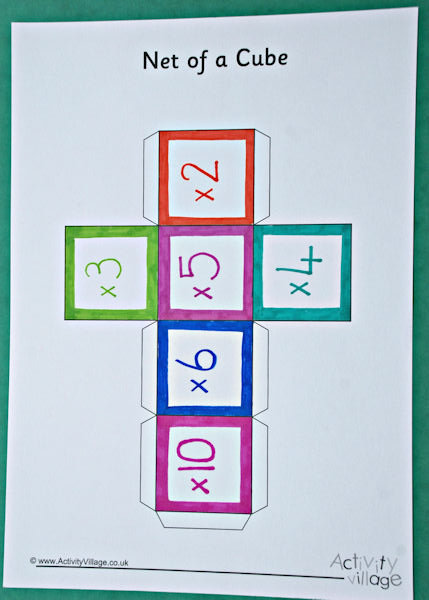 And then the next day we had a go. To begin with I wrote out some half sums onto a large sheet of paper and then he would roll the dice and complete the sums himself. 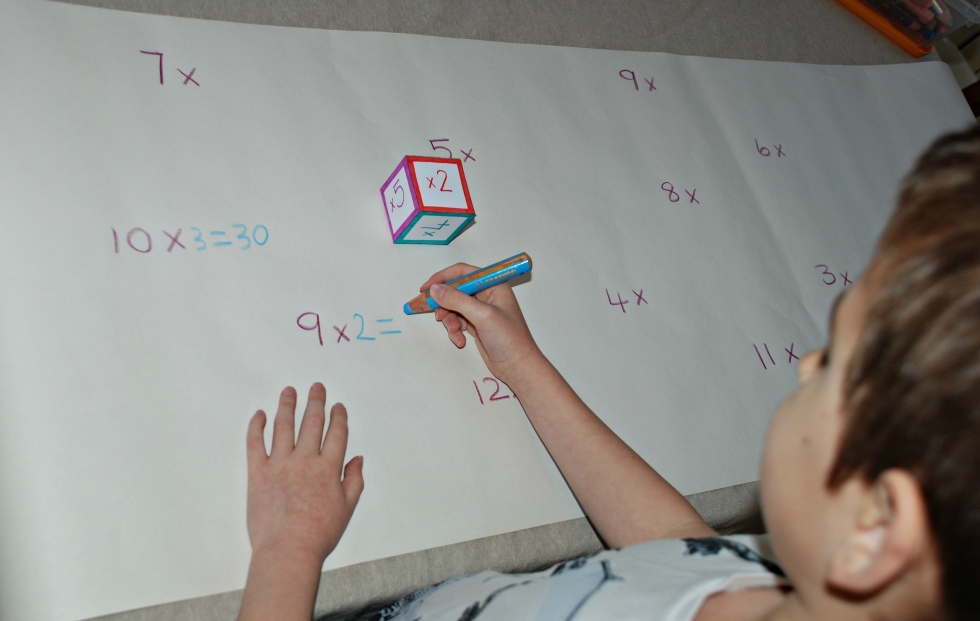 It actually worked really well (although we did find he kept rolling 10’s at one stage so we ended up saying whenever he rolled a 10 he had to roll his dice again).

Once he had finished my half sums he created some of his own. A run way to practise times tables at home!

The maths session was a big hit with him and he has asked if we can do it again; apparently this is now his favourite way to practice his times tables. And I must admit I am glad he has found an enjoyable way to work on them. His response got me thinking and I created a few more custom dice – one with some addition and subtraction and one with things like doubling halving, times by 10, divide by 10 on it.  You really could use it for a lot of different maths practice sessions and make the dice as easy or as complex as you needed. 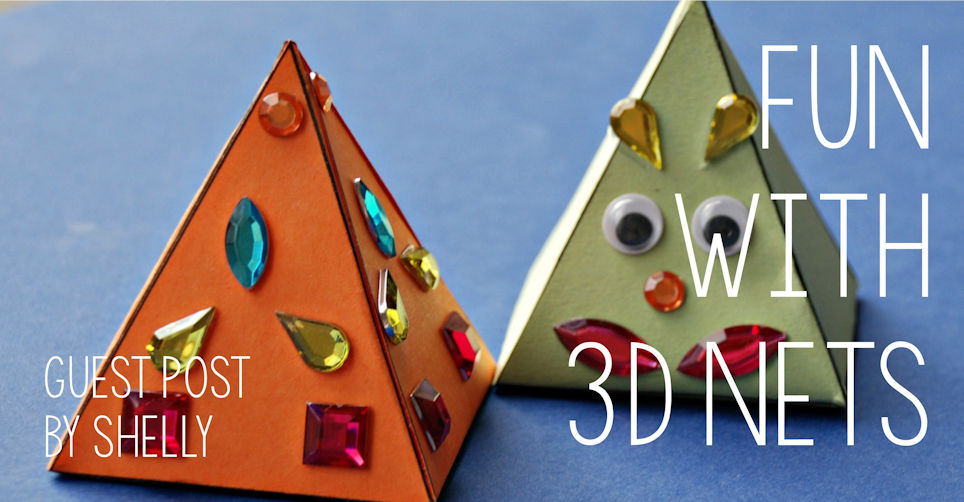 This cube net printable is the perfect hands-on way to learn about this 3D shape! Choose from our pre-coloured or plain white versions, then print onto card, cut out and stick together by glueing the flaps. 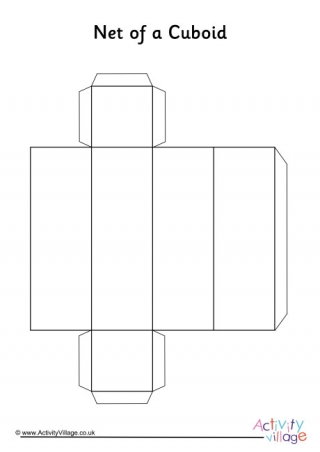 Our cuboid net is perfect if you're introducing the concept of 3D shapes. Choose from either our ready-coloured or plain white versions below, print onto some card, cut out then stick together by glueing the flaps. Also great for craft projects! 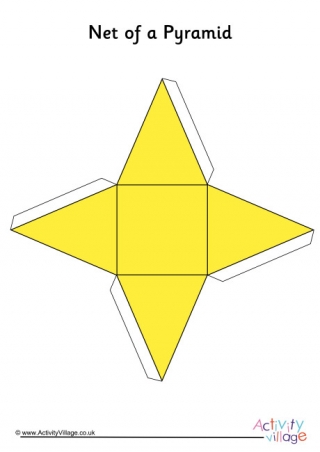 Learn how a pyramid is formed with the help of this pyramid net printable. Print onto some card, cut out, then glue the flaps together to make a 3D pyramid. Choose from two versions below: blank, or ready coloured in bright yellow.