This guest post by Shelly has lots of interesting ideas for introducing similes to young children using printable resources available on Activity Village.

About two years ago I explained the idea of similes to my youngest by getting him to make an animal poster. We had some of the cutting skills images leftover from other projects; when he was younger he went through a stage where he LOVED using all the different animal images from the cutting skills pages to create his own pictures and fact pages, so we had quite a few already printed out.  The idea was that he would stick an image down and then write a phrase with it to make up a simile. For example, for the whale image, he could write "as big as the" - and then instead of writing the word whale he had the image of the whale stuck down. Working on his simile poster His simile poster in progress My son is, however, more a factual writer. He likes writing animal facts or dinosaurs facts! We never seemed to come back to similes again. And then recently I was discussing figurative language with his older sister and she decided to write a poem with similies which prompted my son to start talking about similies again.

This time we started with the idea of writing a Rainbow simile poem. To start with we printed out a colourful rainbow block page and he brainstormed out loud which similies he could write for each colour. As blue as an ocean, as red as blood, and so on.
It worked quite well.

Then we thought about the similies he had thought of and wondered if we could extend any of them by adding in some adjectives, or if any could be changed to something a bit more interesting. So "as green as grass" could become "as green as a field of grass" or "as green as the Amazon Rainforest". Finally, we took our simile ideas and wrote them into this rainbow template.  This meant we kind of ended up with a “simile/shape/colour poem” – as per my son's definition! 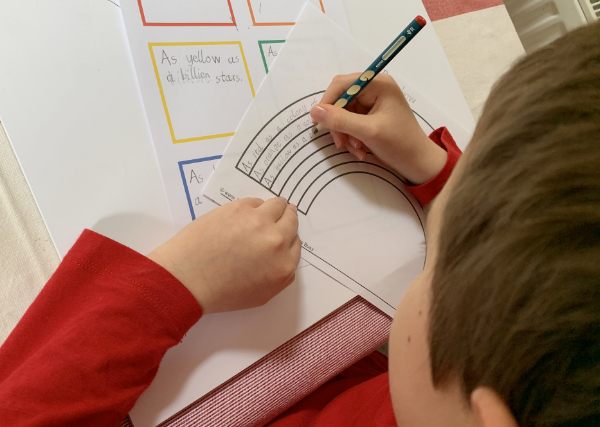 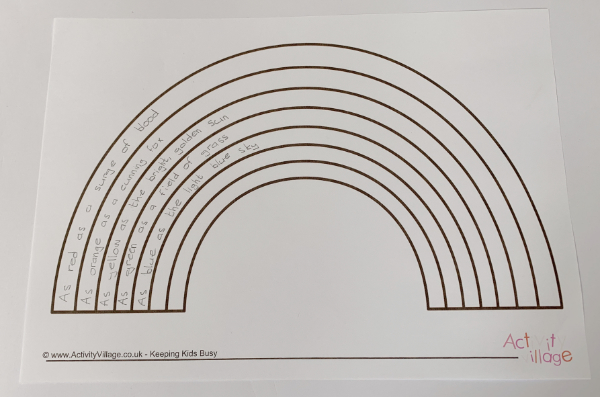 The finished poem. We could have written each line in the appropriate colour!

And then just for fun, I suggested that my son try and think of a few similes about his dad. We used this page. He thought that was a brilliant idea and came up with some good ones. We particularly liked the one where he says his dad is "as clever as raptor". My son is ever so sligtly dinosaur obsessed and raptors are the ones that are so clever and cunning!  We think it would be a fun idea as Father’s Day or birthday card activity. Writing about his dad This is a guest post from Shelly. Shelly is a home educating parent of two children aged 10 and 12. She blogs at ofamily learning together where she shares ideas on the different learning activities that they do including lots of hands-on maths, arts and crafts and anything else that is part of their home educating lifestyle.