We recently visited London on a family trip and the older children are endlessly fascinated by the capital and the things that they saw there. I was keen to follow this up at home so turned to Activity Village for some inspiration. Here I am sharing some of the ways we used the resources.

My eldest is a reluctant writer – I am keen for him to practice his handwriting, but at five years old, he isn’t keen. However when something grabs his attention he will write and write and I knew that these London themed postcards would really appeal to him.

I printed off a couple of these and they had great fun telling me what the pictures were of and colouring them in. We than had a think about what we could write about, and they decided on the Tower Bridge one they would write about the ice cream that they got to enjoy there. I was really impressed with how motivated my son was with this – so much so that he asked to do a second postcard. This time he chose the Big Ben themed one and wrote about how we had seen Big Ben on our trip to London last year. 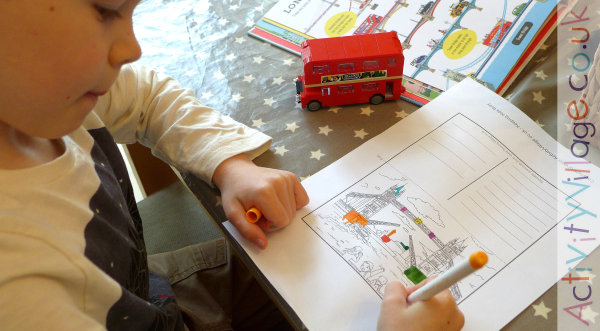 Colouring a Tower of London postcard

2 Creating a map of London

I spotted the I spy printables and thought we could use those to make some books of the things we had seen. However, we then changed our plan when we looked in one of our books saw the main sites plotted out along the Thames. We drew a rough River Thames onto some A3 paper and then the children cut out the pictures and, with a bit of assistance,  managed to plot them in their approximate locations along the Thames. 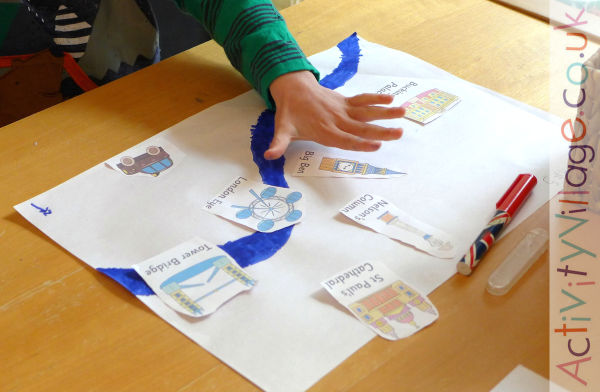 Making our own map of London

You could also use these pictures to create your own book of memories which I might do in a month or two to see what they can recall.

3 Learning about the Royal Family

Our trip coincided with the arrival of the new Prince and with it an interest in the Royal Family. It’s not something we have particularly talked to the children about yet, but our recent London trips have seen us visit Buckingham Palace and the Tower of London and with it talks about the Royal Family. The children saw some of the TV coverage of the Royal birth and wanted to learn a little more. We coloured in some pictures of Buckingham Palace and the Queen whilst I read them some information about the monarchy and gave them the names of some of the key figures.

4 – Writing about our trip

I was keen for the children to record some of their time away and I have found that D is much more likely to write about experiences rather than just general stuff. He was happy enough to use the London writing paper to write about the things we had seen whilst we were away and to tell me what his favourite thing was (having an ice cream!). When were choosing which one he wanted to use it was interesting to hear him recall the things we had seen and which trip we had seen them on. 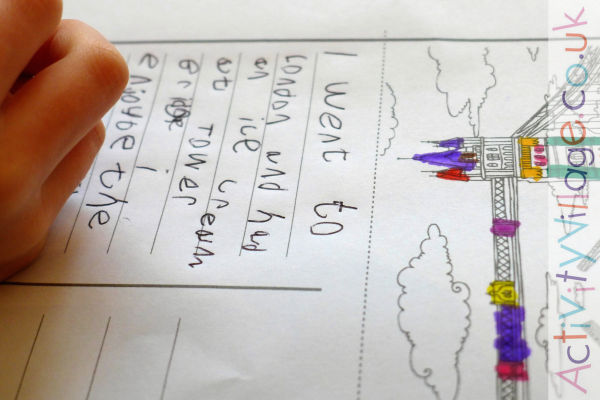 There are some great ideas for London themed crafts that you could make or you could also task children with making up something using Lego, or some good fun with junk modelling to make a Big Ben or another famous site. We used some blue fabrics to make the River Thames across the floor (I knew my extensive scarf collection would come in handy one day!) and we used the Lego bus and guard that we had bought to give a guided tour around London. A great and fun way to get children talking about their experiences and recalling memories as well as working on their language skills too. 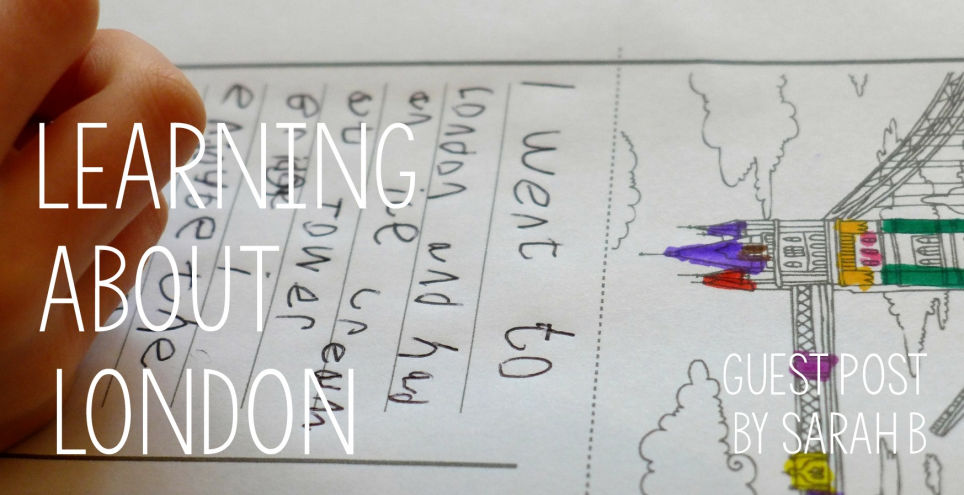