Every year the kids make a few new Christmas decorations and for some reason most years there always seems to be a theme – totally unintentional – this year they seem to be all about making standing 3D decorations. It started with our Christmas angel.  My daughter wanted to make an angle to stand on the window sill of our front room so that you can see if from the road.  So we downloaded the Christmas angel page and printed it out onto card.

My initial plan was that we could stick the angel onto an empty toilet roll. But after we had cut the angel out I realized the angel would be able to stand by herself. All you need to do it only glue the top section (her head shoulders and wings) and then on the body section just glue the edges of the front and back so her dress naturally forms a bit of a circle. If you do that she stands perfectly fine on her own. 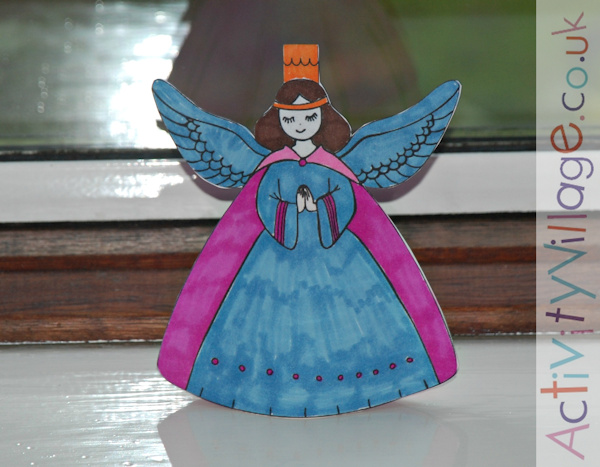 Angel standing on the window ledge

And it also means that you could always use her at the top of your Christmas tree if you wanted. 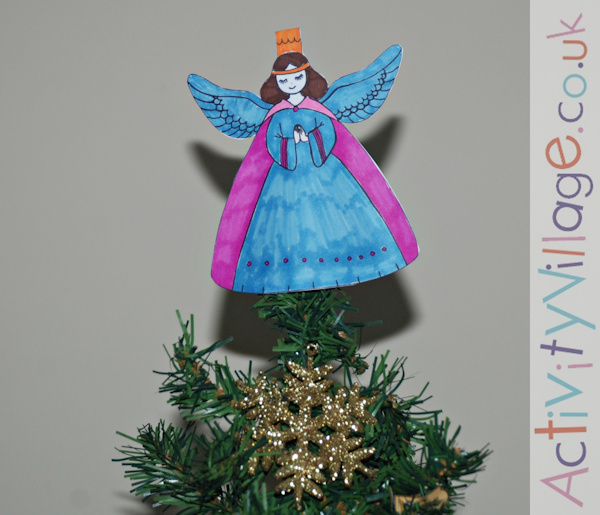 Angel on top of our Christmas tree

After seeing the standing angel my son wanted to create a standing Santa.  I looked for a Santa Claus picture that was fairly symmetrical and we went with this one – Father Christmas colouring page – with a Santa picture you are never going to get it exactly symmetrical because of the hat on the one side but with kids crafts we never go for exact we go for fun.

My son started colouring each Santa in a different colour and even managed to persuade his sister to create a purple and pink Santa for him to use. 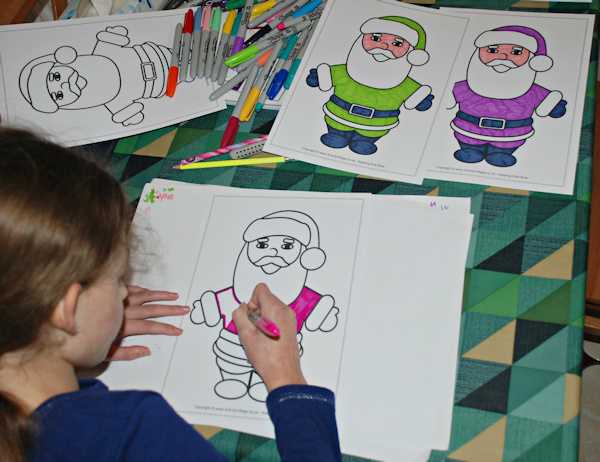 Colouring in our Santas!

And the colourful Santa’s look brilliant! 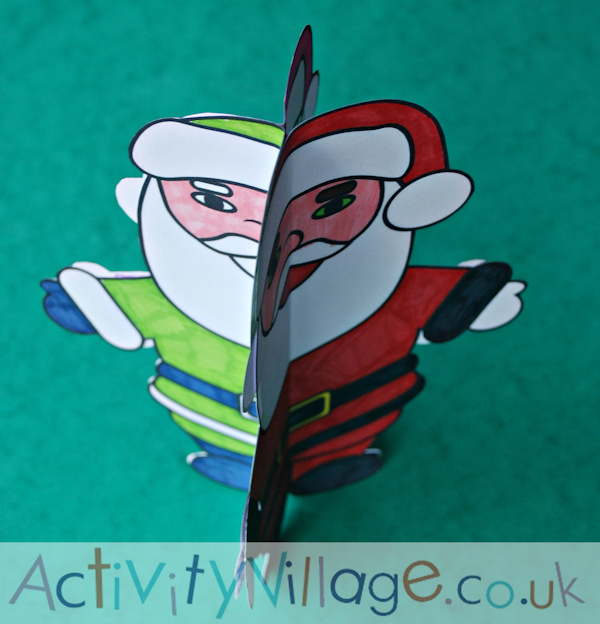 The only problem is my son can’t decide where he wants it to stand and keeps moving it around the house so now we have a moving colourful Santa instead of a standing Santa. 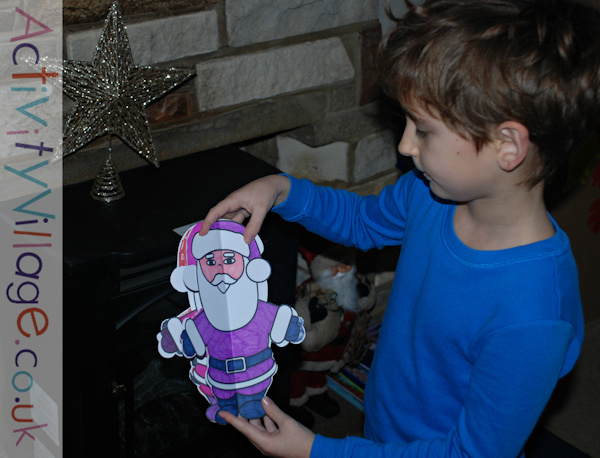 Showing off the lovely Santa he made! 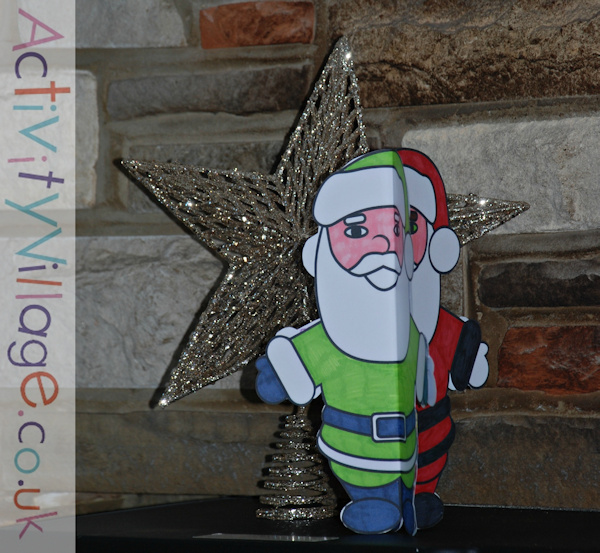 Santa standing on the table... 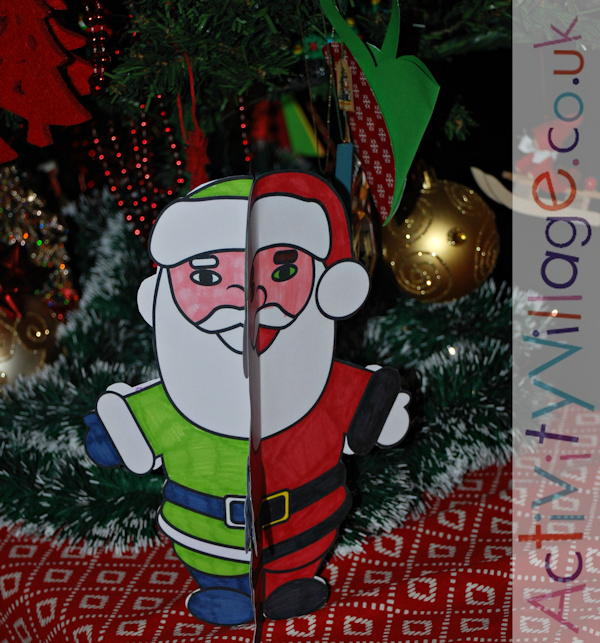 and Santa by the Christmas tree!

We also had a go at creating some 3D stars – using the same gluing method as we used with the Santa’s. For each star we cut out 4 same sized templates – we actually used the stars from the cutting practice page for this. For some of the stars we painted the yellow card with some glitter paint that the kids had which gave a really lovely effect and we also created some stars were we alternated colour card – so yellow, orange, yellow, orange. Once stuck together the stars do actually stand perfectly on their own.

But my son agreed that they really suited the Christmas tree. 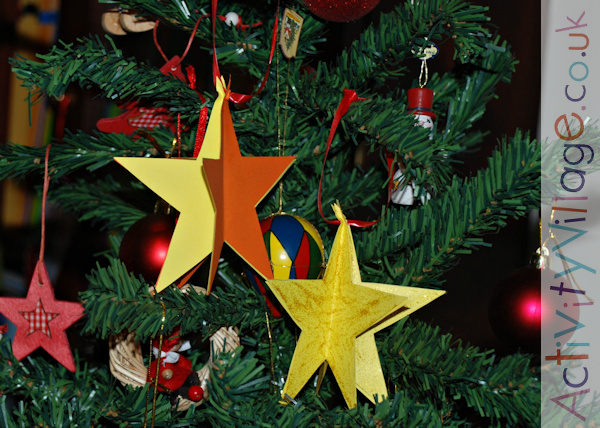 Stars hanging on the Christmas tree 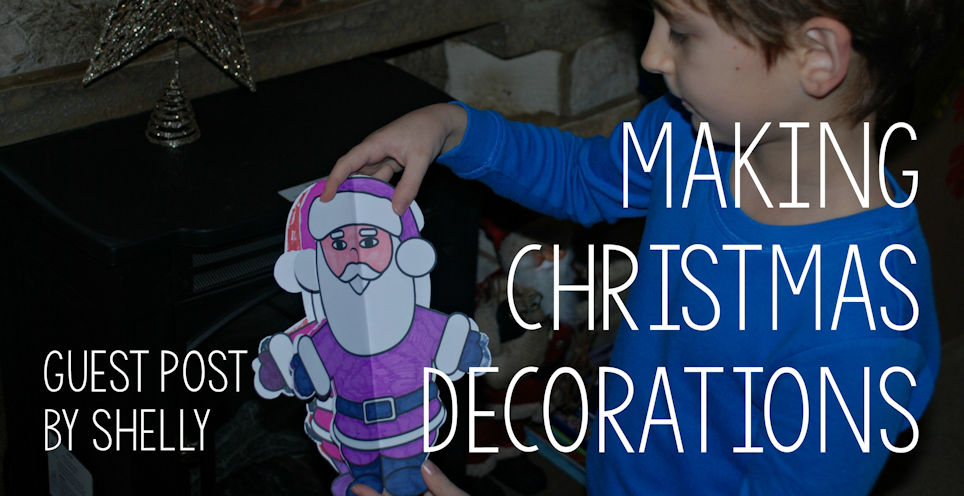 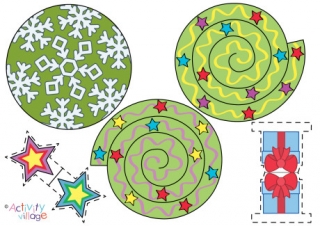 Here's a fun Christmas decoration to try making with the kids. Print onto white card then cut out all the pieces including the two spirals. 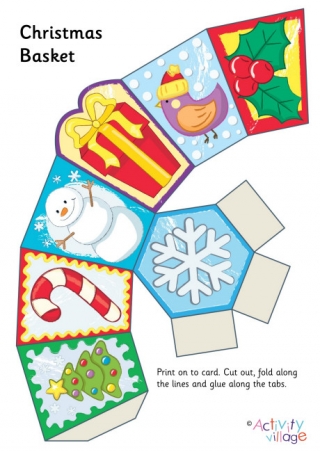 Make your own pretty Christmas basket, perfect for making your own gift (you could put chocolates or small presents inside) or as a festive decoration. Print onto some card, cut out and fold along the lines, then glue the tabs to stick together. 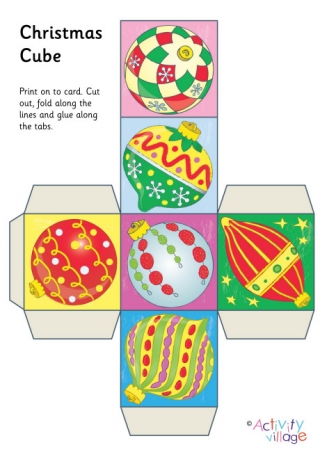 These lovely Christmas cubes look cute placed underneath a mini Christmas tree or on a mantlepiece! Print onto some card, cut out, then fold along the lines. Glue along the tabs then construct your cube! We have two versions to choose from below: colour, or black and white.