Both kids have surprisingly been enjoying some spooky writing activities lately.  I am not really sure what prompted it, the only thing I can think of was that the spooky story word mat gave them some inspiration and it sort of snowballed from that.

My daughter first used the spooky word mat when she was writing a broomstick acrostic poem; she was looking for some “witchy words” and I had spotted the word mat earlier so we quickly downloaded it.  It was the perfect tool to give her some extra inspiration. The great thing about a word mat is often the words included on the mat remind the kids of other words. 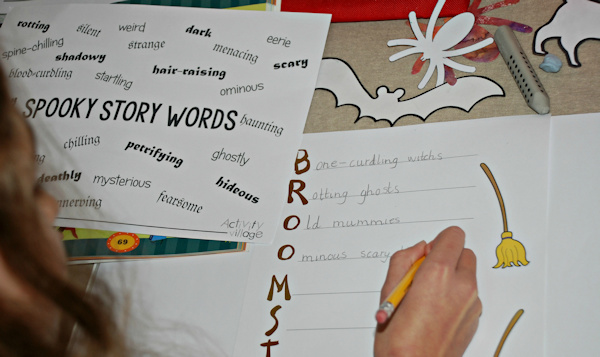 And she used it for a few more as well. 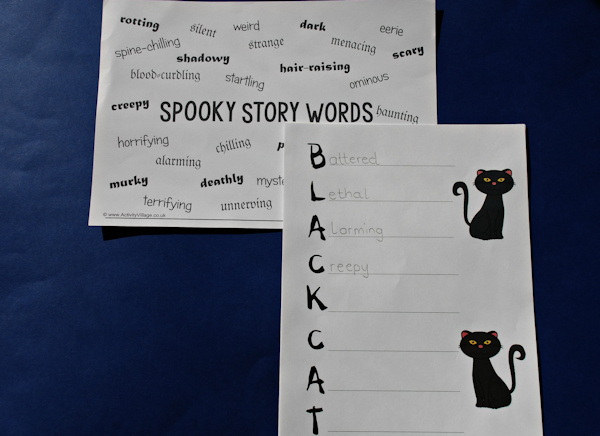 The acrostic poems have been a massive hit in my house.  I really wish we had tried them earlier.

While she was busy with her poems my youngest decided he wanted to write a spooky story. I had already downloaded a bat scene colouring page for him – he loves bats.  So I suggested he write about the picture – brilliant.  That really got him going. 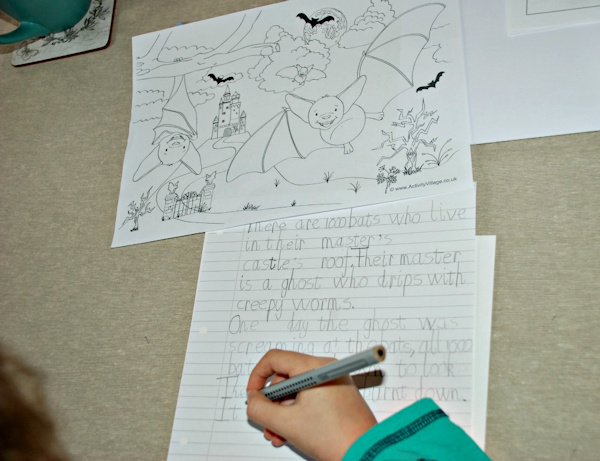 Writing a story about the bat colouring in page

And he managed to drag his sister into writing a bat inspired story of her own.

Even if your kids are not really at that writing stage the bat scene colouring page is a great one to print out and while they colour in. You could always ask them what they think the story is. (My son has created about 3 different versions all from the 1 colouring-in page – he does like to chat away while he colours so that might be part of it.) 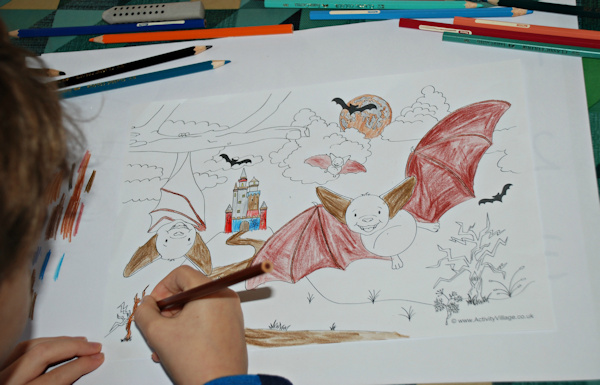 Colouring in the bat scene

The spooky writing was proving such a fun activity with both kids that the following day I made us a skeleton story mountain – really the same thing as a typical story mountain only I used the skeleton colouring page inside of a picture of a mountain!  I wrote out labels for the different stages and stuck them around the skeleton (Introduction, Build-up, Problem, Solution, Ending).  It really was very easy to set up and the kids liked the fact that we were using a skeleton. 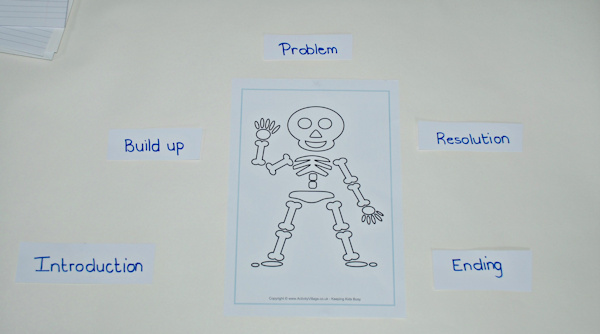 Then we started talking about potential stories that we could create and in every story we tried to give a key point for each stage.  We jotted some of the points down directly onto our skeleton story mountain. 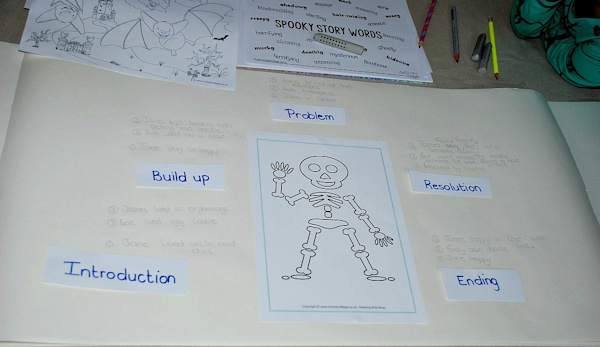 Jotting down ideas on the story mountain - they are written directly onto the backing paper in pencil so are a little hard to see in this photo.

It actually proved to be a really good activity.  My daughter likes writing more character descriptions than stories with actual events so it got her thinking about creating an event and then a solution. My youngest likes creating an elaborate problem but is not so good about solving it and making a conclusion. So it made him think about the ending more.

Both kids like the skeleton story mountain so much, they have stuck it up on the kitchen notice board. 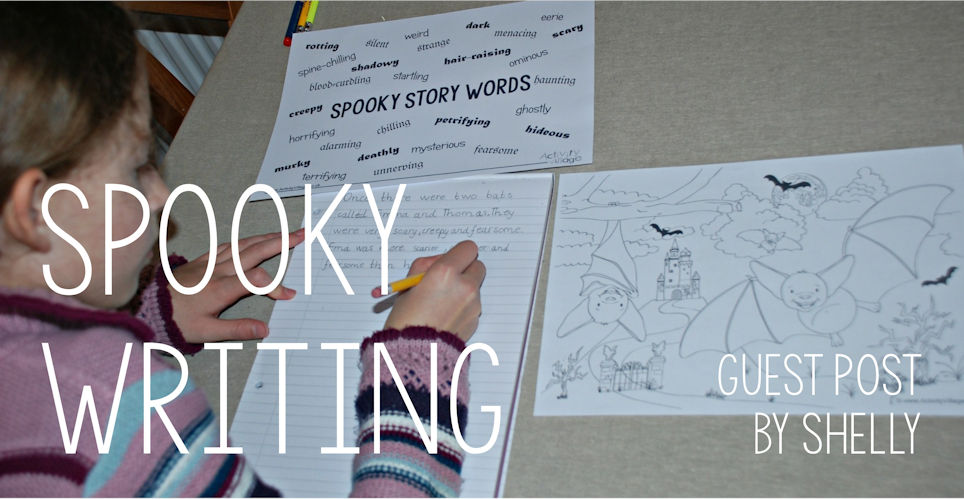 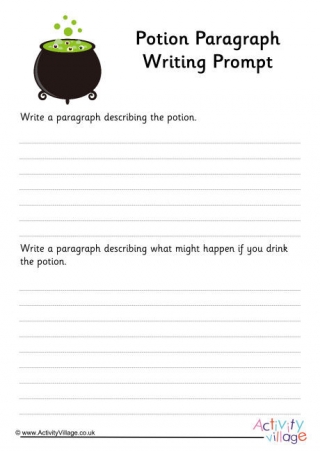 "Double, double toil and trouble, fire burn, and cauldron bubble!" Shakespeare himself wrote about witches and potions, and now the kids can have their own turn writing about potions with our fun writing prompt! 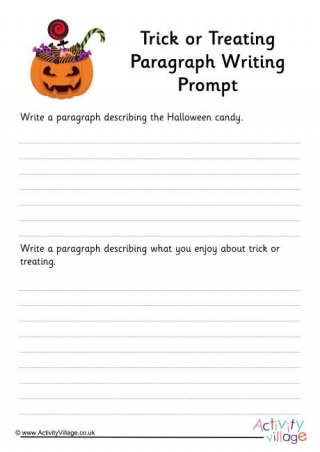 What do you enjoy most about trick or treating? Write a paragraph about it, and another paragraph describing the delicious looking candy! 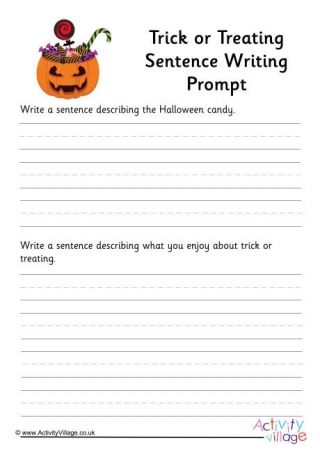 Even the most reluctant writers will enjoy writing about trick or treating on this fun Halloween-themed worksheet.