"Tomorrow will be a good day."
Captain Tom's motto

Captain Tom won all our hearts with his brave efforts, and we celebrated his 100th birthday by sending him over 150,000 birthday cards, including a special one from the Queen! A month later, Captain Tom travelled to Windsor Castle to meet the Queen and receive a knighthood, and he has received many other awards in recognition of his achievement.

You can read more about Captain Tom and donate to the charities he supported through The Captain Tom Foundation. 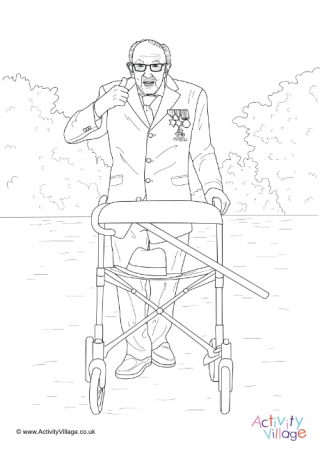 Colour in this picture of Captain Tom, cheerfully walking his 100 laps to raise money for NHS charities. 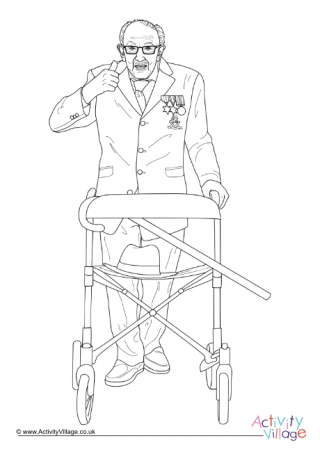 Captain Tom, aged 99, walked 100 laps around his garden to raise money for NHS charities, and by doing so lifted the spirits of the nation during the first months of the Covid-19 pandemic. What a true hero he was. 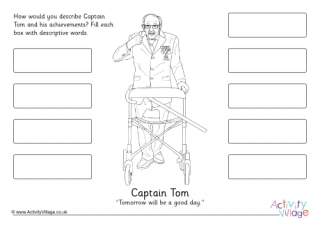 Fill the boxes on this worksheet with descriptive words - describing Captain Tom and his incredible achievements. 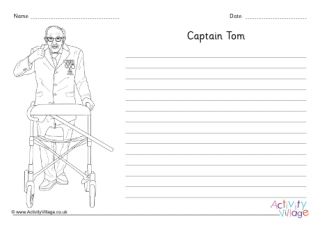 Perhaps the children can use this writing page to put down their thoughts about what Captain Tom did for the country, copy his famous motto, or perhaps write a tribute to this inspiring old man. 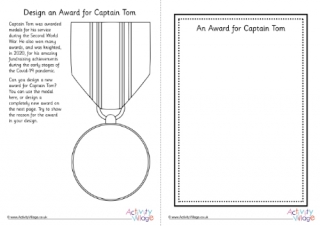 Captain Tom was awarded medals for his service during the Second World War. He also won many awards, and was knighted, in 2020, for his amazing fundraising achievements during the early stages of the Covid-19 pandemic. Can you design a new award for Captain Tom?