Sir David Attenborough (1926–) is a British naturalist and television personality, world-famous for writing, presenting and producing award-winning wildlife documentaries. A great communicator, educator and campaigner, his distinctive voice has brought the world of wildlife into our homes for more than 60 years, captivating generations across the globe. Find out more about this much-loved icon of British television and enjoy exploring our printable resources below. 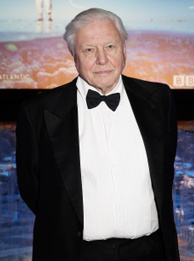 David Attenborough was born in the same year as Queen Elizabeth II.

“The natural world… is the greatest source of so much in life that makes life worth living.”

“I just wish the world was twice as big and half of it was still unexplored.”

“Cherish the natural world, because you’re part of it and you depend on it.”

A Short Biography of David Attenborough

David Attenborough was born in Isleworth, West London, in 1926, but grew up in Leicester. He was the second of three boys born to Frederick Attenborough and his wife Mary. Alongside his brothers Richard and John, David’s parents also took in two Jewish refugee girls during World War II, Irene and Helga.

David’s father was the Principal of University College, Leicester, and the children grew up on campus. David had an early love of nature and particularly enjoyed collecting fossils, stones and bird eggs as a child. On leaving grammar school, he was awarded a scholarship to study natural sciences at Cambridge University.

In 1947, David was called up to serve in the Royal Navy and spent two years stationed in North Wales and the Firth of Forth, Scotland. Shortly afterwards, he married Jane Oriel and they went on to have two children together, Robert and Susan.

David began his career working as an editor for an educational publisher, and then joined the BBC as a producer in 1952. At the time, he felt uncomfortable with the format of the natural history shows, which brought animals into the television studio, away from their natural habitat. David launched a new series called Zoo Quest in 1954, which filmed animals in captivity but also in the wild. The show’s success led to the BBC creating a Natural History Unit in 1957.

In the early 1960s, David resigned from the BBC to study social anthropology (the study of human societies and cultures) at the London School of Economics. But when BBC Two was created in 1965 he was asked to become the new station‘s controller. He included music, comedy, drama, business and sport in the schedule, as well as science and natural history. In fact, when BBC Two broadcast in colour in 1967, David introduced televised snooker!

In 1969, David was promoted to director of programmes, but resigned three years later to return to his love of broadcasting. Writing and producing a number of natural history series for television, his greatest success came in 1979, when an estimated 500 million people worldwide watched ‘Life on Earth’. This 96-episode series was a complete survey of plant and animal life and made David a household name. There were some particularly memorable moments, including two young gorillas and their mother playing with David and trying to take his shoes!

David went on to write, produce, present and narrate many more award-winning programmes. Some used new film techniques, such as time-lapse photography to show the speeded-up growth of plants, and infrared cameras to show the behaviour of nocturnal animals. He narrated every one of the 253 episodes of Wildlife on One (1977–2005) and in 2006, Planet Earth was the BBC’s first HD show and biggest-budget wildlife documentary. Its success led to a sequel, Planet Earth II, produced in ultra-high definition (4K) ten years later.

David is also a passionate environmental campaigner and for many years has warned us of the fragile nature of our planet. Many of his later documentaries have addressed issues such as global warming, population growth and endangered species. His work on Blue Planet II (2017) also alerted the world to the devastating effect that plastic was having on marine life.

David has also won numerous awards, including a CBE (1974), a BAFTA lifetime achievement award (1980), a Royal Society fellowship (1983), a knighthood (1985), Order of Merit (2002), and over 30 honorary degrees from British universities. At least 11 plants and animals have also been named after him, such as Nepenthes attenboroughii – a giant carnivorous plant discovered in 2009 (nicknamed ‘rat-eater’ because it attracts animals with its sweet nectar!)

Despite his age, David continues to dedicate his life to the celebration and protection of our planet, and to inspire generations to maintain the beauty and balance of our natural world. 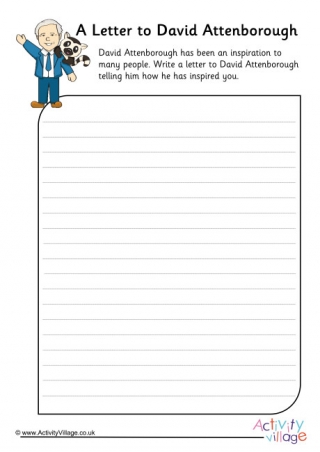 David Attenborough has been a huge inspiration to many people throughout his life and career. Can the children write him a letter telling him how he has inspired them? 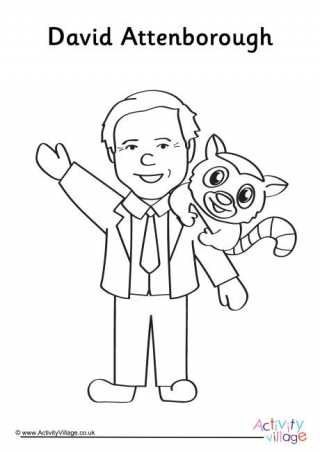 Introduce the kids to the legendary David Attenborough with this fun colouring page! 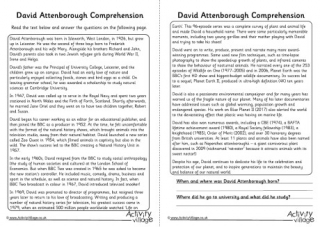 Read all about the life and career of David Attenborough, then answer the questions at the end of this comprehension worksheet. 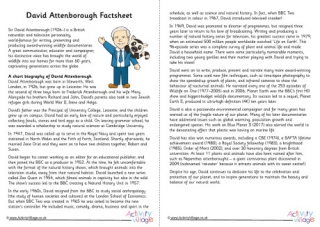 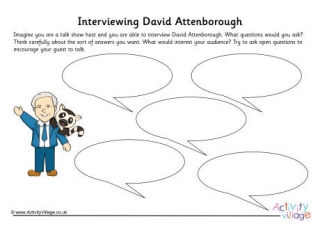 David Attenborough has been interviewed many times for television and radio shows, but what would you ask him if you had the chance? Write your questions down in the speech bubbles on this worksheet. 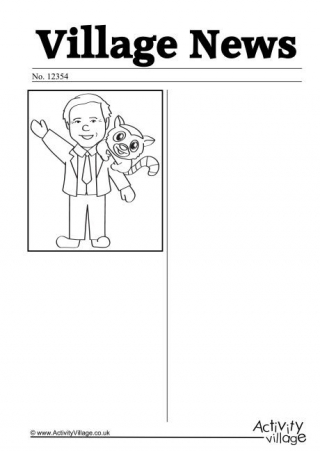 David Attenborough often raises important issues such as climate change and talks about them in newspaper articles. Children can use this newspaper writing prompt to write their own article on David Attenborough and one of the environmental causes he supports, perhaps? 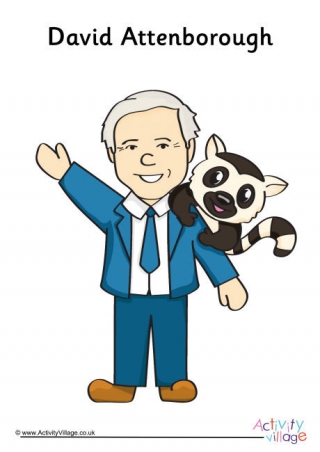 David Attenborough has introduced wildlife and nature to millions of people. Here's a simple poster of him to print and use in your classroom displays. 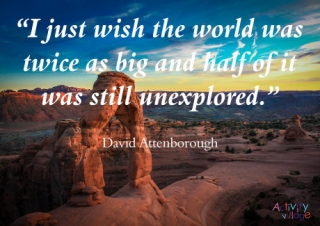 "I just wish the world was twice as big and half of it was still unexplored." This fabulous poster featuring a quote by David Attenborough is perfect for displays and for sparking a fun conversation or discussion. 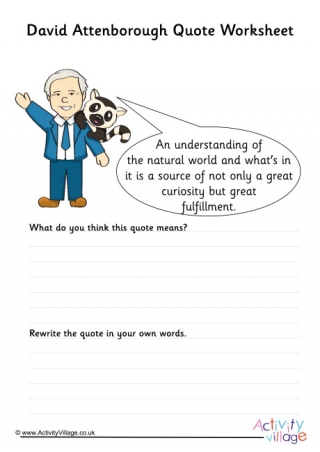 Use this simple quote worksheet featuring a quote by David Attenborough to spark off your studies on this interesting man and his long career... 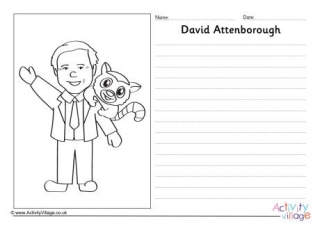 Have you watched one of David Attenborough's wildlife documentaries recently? You could use this story paper to write all about it. 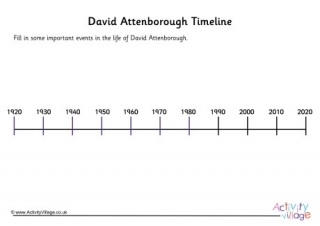 David Attenborough has had a successful career spanning over 60 years. Add some of the highlights to this timeline worksheet. 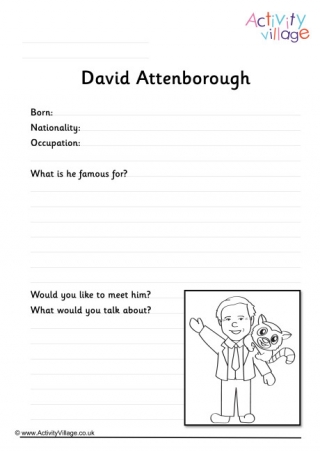 We think a lot of children (and adults!) would like to meet David Attenborough! This simple worksheet asks a few easy fact-finding questions about him and asks what the children would talk to him about if they met. 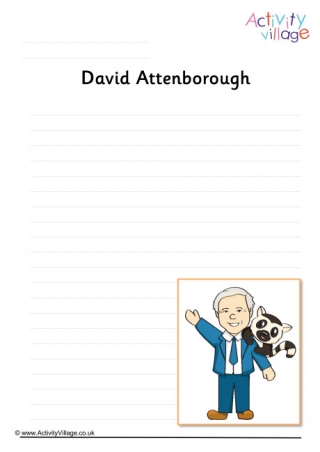 Write about the remarkable life and career of David Attenborough, or record what you have learned from one of his documentaries on this fun writing page. 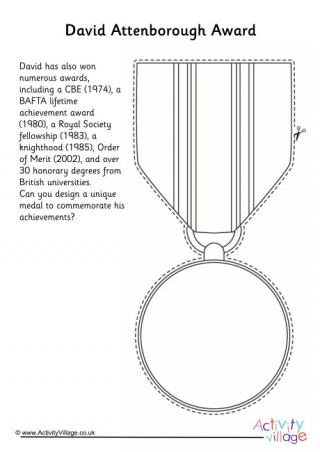 David Attenborough has won many awards, including a knighthood, but can you design your own unique award to celebrate his achievements? 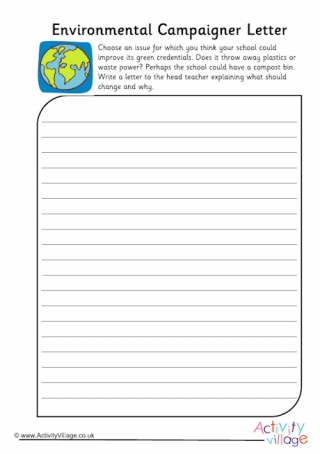 Calling all eco-warriors! Could your school do more to improve its green credentials? Write a letter to your headteacher telling them what you think they could improve and why... 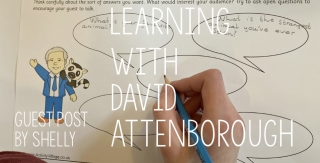 Did you know that there are lots of activities all about national treasure Sir David Attenborough in the Famous People section of Activity Village? Shelly and her kids learn more about him in this guest post. 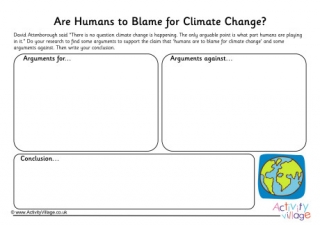 This worksheet helps kids research and understand the important issue of climate change. Can they find arguments for and against the claim that humans are to blame for climate change, then write a conclusion? 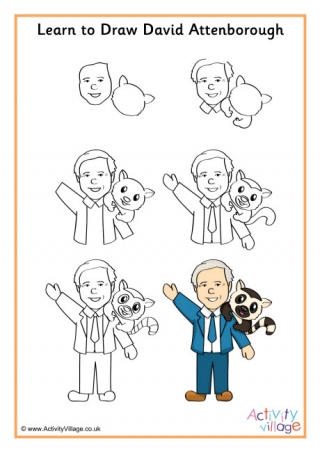 You've probably seen David Attenborough on his television documentaries, and now you can learn to draw him too with our simple step-by-step learn to draw printable. 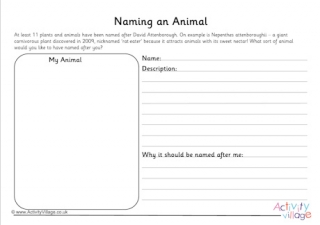 Here's a fun activity with a difference! Can the children think of what kind of animal they would like named after them? They should think of a name, description, and draw a picture of it too... 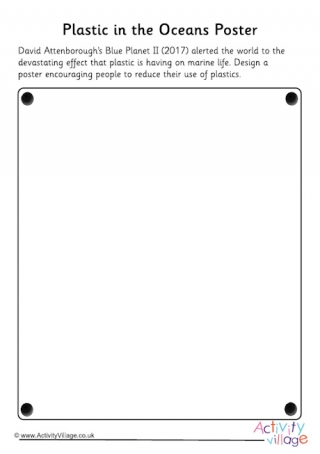 In Blue Planet II (2017) David Attenborough highlighted how plastic is slowly killing our sea creatures, fish and birds. Can the kids design a poster encouraging people to reduce how much plastic they use? 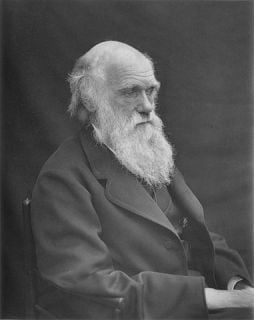