Learn a little about D-Day below, or scroll down for our D-Day resources (for Members).

On 6th June 1944, Allied forces launched an attack on Nazi-occupied France by sea, air and land. It was D-Day - the beginning of a huge military operation code-named Operation Overlord that had been in planning for two years.

By 1944, much of Europe was occupied by German troops or under the control of Germany and its allies. Hitler expected a cross-Channel invasion and had built a line of defences right down the coast of France to Norway, known as the Atlantic Wall. 58 German divisions, out of nearly 300, guarded the coast. Millions of mines were dug into beaches, which were also covered in barbed wire and wooden spikes, and solid concrete gun emplacements threatened soldiers who dared to land there.

Despite the German defences, the Allies had to pick a landing area to use as a bridgehead into continental Europe. They chose a 50 mile stretch of the Normandy coast, and identified 5 key beaches. The beaches were given the code-names Utah, Omaha, Gold, Juno and Sword.

The Allies began planning Operation Overlord in July 1943. After a failed attack against the Atlantic Wall at Dieppe in 1942, they knew that they had to attack with overwhelming numbers and force. Factories worked double-time to create the vehicles, weapons and supplies needed, and 9 million tonnes of supplies were shipped across the Atlantic from North America. Many thousands of parachutes were sewn. A special kind of temporary harbour called the Mulberry was invented, as was a flexible pipeline (PLUTO) to take fuel under the water across the channel to supply aircraft and vehicles. Ships were gathered and landing craft built in huge numbers. The American general Dwight Eisenhower was appointed commander of Operation Overlord.

By D-Day, there were almost 2 million troops in Britain, from 12 countries, preparing for the invasion. The Allied forces landing on D-Day were mainly American, British and Canadian troops, but there were also Australian, Belgian, Czech, Dutch, French, Greek, New Zealand, Norwegian, Rhodesian and Polish troops involved.

It is hard to believe how much work was done and how many people contributed towards the preparations for the D-Day attack. For the attack to be successful, the tides, moon and weather had to be right. Back then, people didn't have access to satellite weather prediction methods! But a British mathematician invented a special calculator to predict tidal patterns and 5th June was chosen as D-Day.

While preparations continued, Operation Bodyguard was put into action - a plan to fool the Germans that the Allies would attack in Norway or Pas-de-Calais. Inflatable tanks were built and used to make the Germans think the Allies had more tanks than they did! But the deception didn't stop with tanks. A whole imaginary force of American soldiers was even created in south-east England to make the Nazis think the Allied forces were larger!

Spies and double agents were put to work to spread false information. The French Resistance (people in France who were fighting secretly against the Nazi occupation) and the British Special Operations Executive (SOE) carried out acts of sabotage on German defences, and sent intelligence to help the preparations. Carrier pigeons were used to send messages!

In the months before D-Day, Allied planes dropped bombs on road and rail networks around Normandy - but also in other areas of France, to divert attention away from the area. The night before and into the morning of D-Day, thousands of dummies on parachutes were dropped over France, to scare the Germans and draw the forces away from the landing beaches!

We know that at least some of these deceptions were successful. As late as July 1944, a month after D-Day, the Germans were still expecting the Allies to invade at Calais.

Not everything goes according to plan! The weather on 5th June was terrible and D-Day had to be postponed - luckily by only 1 day. The invasion began just after midnight on the morning of 6th June.

“You are about to embark upon the Great Crusade, toward which we have striven these many months. The eyes of the world are upon you.”
General Dwight Eisenhower

Resistance at Gold, Juno, Sword and Utah beaches was lighter than expected, but US forces faced heavy resistance at Omaha Beach and suffered over 2,000 casualties. It is thought that some 4,000 Allied troops were killed on 6th June, with thousands more wounded or missing.

The D-Day landings were the beginning of a long and hard campaign to drive the German army out of France. By 11th June the beaches were secured. Over 325,000 troops, 50,000 vehicles and over 100,000 tonnes of equipment had landed at Normandy for the attack on France, and by the end of June 875,000 had men crossed the Channel.

The German forces were initially confused. Hitler thought that the attack was a trick intended to distract him from the real invasion in the pas-de-Calais area, so was slow to send help. The German troops, however, put up strong resistance, and British troops were hardest hit. It was a long, hard fight, but by the end of August, the Allies had liberated Paris and the Germans had retreated out of northwestern France. The tide had turned.

Here's a poster to print to commemorate the 75th anniversary of D-Day on 6th June 2019. If you can, print on borderless settings. 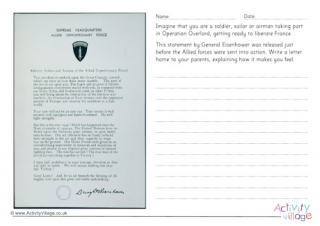 General Eiseinh released this inspirational statement just before the Allied forces set off for France. We ask children to read the statement and describe how it made them feel in a letter home to their parents. 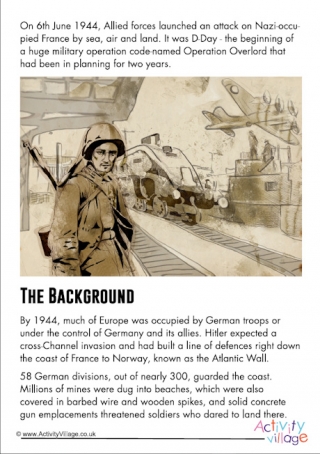 Learn about D-Day with the help of this interesting fact sheet, which includes our write-up and a number of photos too. 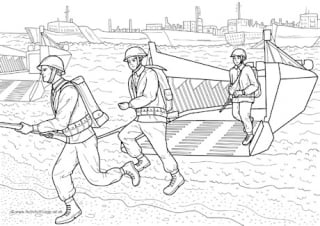 This colouring page depicts troops arriving on the beaches of Normandy on D-Day. 5,000 ships delivered the troops to 5 key beaches over a 50 mile stretch of the coast. When they came ashore they faced enemy fire, mines, barbed wire and other defences. 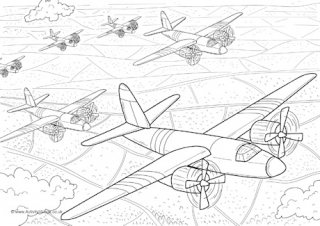 This D-Day colouring page shows Allied airplanes flying over France. 24,000 troops were dropped by parachute (together with many thousands of dummies) behind enemy lines, to destroy bridges, capture or destory gun batteries and link up with Allied forces coming inwards from the beaches. 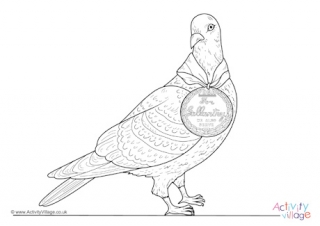 Carrier pigeons were absolutely crucial during the war and for the planning and execution of D-Day! 32 pigeons even won a medal - the Dickin Medal - for their service. We thought we would celebrate their extraordinary contribution to the war effort with this colouring page. 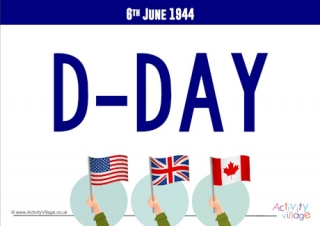 Available in landscape and portrait versions, this D-Day poster might useful for your D-Day display, the whiteboard, or as the front of a folder of work. 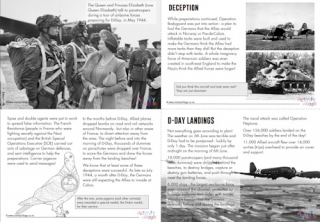 This 15-page slideshow tells the story of D-Day, with plenty of pictures and interesting facts to keep the kids engaged. It is set to manual advance, so click on the screen to turn the pages. 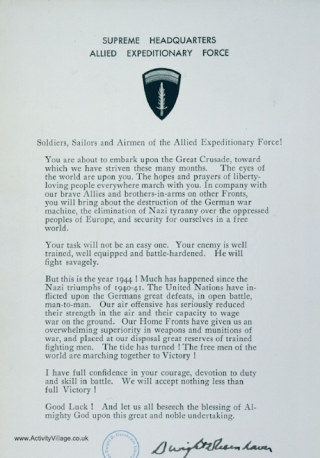 Here is a photo of the D-Day statement to the soldiers, sailors, and airmen of the Allied Expeditionary Force, sent by General Eisenhower just before the D-Day landings took place. 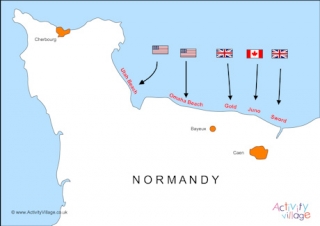 This is a useful, simplified map of the Allied D-Day landings on the coast of Normandy, showing the 5 code-named beaches and the Allied forces carrying out the attacks on each beach.

Please note that this is an indicative map and we do not claim accuracy. 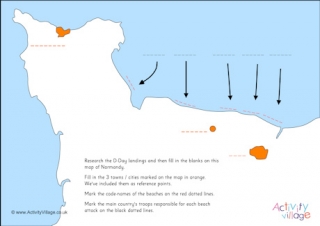 Fill in the blanks on this map of Normandy to show the locations of 3 towns / cities and the code-named beaches, together with the country's forces responsible for landing on each beach. 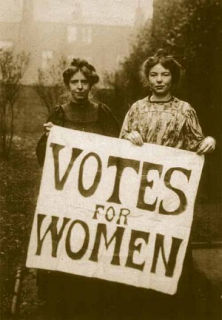