Droughts occur when an area has less precipitation (rain, snow, sleet or hail) than normal for a long period of time, or when water shortages occur for other reasons such as a river drying up, or people overusing water supplies. 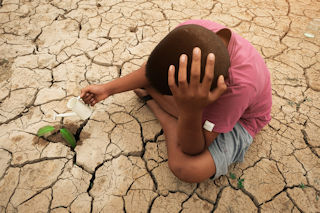 A lack of water can have a devastating effect on people, plants and animals. We need to drink clean water to survive and water is essential to grow our food, but we use water for other activities, such as washing, too. Some parts of the world even rely on water to generate electricity.

Drought is a serious concern for farmers who need water for their crops and livestock. At their worst, droughts can cause deserts to form, and can trigger famines (when people starve through lack of food). The effects of a drought build up slowly, and can continue long after rainfall returns. Sometimes the fertility of farmland is destroyed forever.

All parts of the world can experience drought, but some suffer more severely than others. Africa, for example, has regular drought conditions, and in Australia, droughts bring the risk of wildfires that spread quickly in high temperatures and strong winds. In 2013, Australia had on average over 4,500 wildfires a week!

In many hot, dry regions, winds can also create sand storms that stretch over 1,000 feet (305 metres) high. These swirling storms of dust – with winds of up to 25 mph (40 kph) – can get in your eyes, ears and mouth, making it difficult to breathe.

The UK has a lot of rainfall, so drought conditions are thankfully rare, but in July 2013, the country experienced a mini heatwave – the third warmest July on record. June had also been a dry month, so the ground warmed up quickly, warming the air above it, too. Young children and the elderly were particularly at risk and over 760 deaths were attributed to the unusually warm conditions. 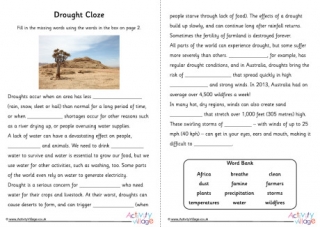 Learn about droughts by reading the text and filling in the blanks from the word bank on this cloze ... Here's a worksheet for the kids to try that's great for practising literacy skills and for learning about the weather too. Can they write about the experience of living through a period of drought?

Our easy-to-read factsheet is a helpful introduction to droughts - you can also use it as a learning tool alongside some of our other weather activities too. 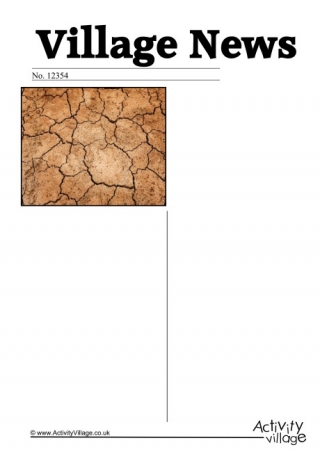 Inspire the kids to try a bit of journalism with this drought newspaper writing prompt. This photographic poster shows what extreme drought will do to land. Use it as part of your Extreme Weather topic, perhaps. Our drought safety leaflet is an interesting way to practise writing skills and expand on a weather topic. Print and fold along the dotted lines to make a 3-panel leaflet. Ask the children to find out some good advice for staying safe in a drought, then design their own poster offering advice to others... Our story papers are designed to encourage children's creativity by providing pictures to spark off the writing process! Use this drought story paper for writing facts about droughts or for a creative story.