Francina "Fanny" Elsje Blankers-Koen (1918 – 2004) was a Dutch athlete, best known for winning four gold medals at the 1948 Summer Olympics in London as a 30 year old mother of two - something most people believed impossible and undesirable at the time. She was the most successful athlete at the 1948 Summer Olympics, and the first woman to win four gold medals, but was always modest about her achievements.

Fun fact: Fanny was known as "the Flying Housewife".

"All I've done is run fast. I don't see why people should make much fuss about that."
Fanny Blankers-Koen 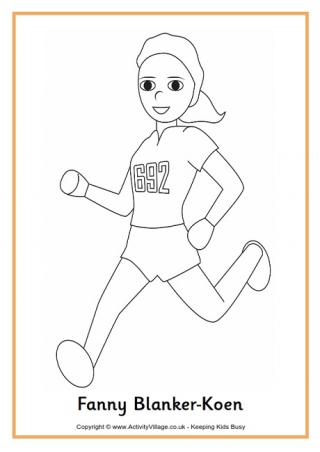 Here's a colouring page of Fanny Blankers-Koen, the Dutch athlete who took the world by storm in the 1948 Summer Olympics in London. A fun illustrated poster of Fanny Blankers-Koen, the "flying housewife" of the 1948 Olympic Games in London who won an unprecedented four gold medals for her country, the Netherlands and changed the way women in sport were viewed by the world forever. Find out some fun facts about the Fanny Blankers-Koen, Dutch mother and housewife and most successful athlete at the London Olympic Games in 1948, then fill in our worksheet. Write about Fanny Blankers-Koen, known as the Flying Housewife - wonderful Dutch athlete of the London Olympic Games in 1948.