We have provided 3 sample lists of 32 teams. We have gone for a balance of teams from different areas. The teams are sorted into ‘seeds’. Seed 1 are the better teams and Seed 4 the least likely to win the tournament.

If you want to choose your own teams print the blank team list and write on your teams. You can be as realistic as you like when it comes to ‘seeding’ them. When you have a list of 32 teams, 8 in each ‘seed group’, you need to make up your tournament groups. For each tournament group you must include 1 team from each of the 4 ‘seed groups’.

Setting up the game:

Print out the tournament tracker and write in your teams.

Print out the Spinners. You will need to print these on card or stick them on to card after you have printed them on paper. Cut the spinners out and push a matchstick or small pencil through the centre of each.

The numbers on each part of the spinner show the number of goals that team might score in a match. To make the game more realistic, the spinners have been designed so that teams in the seed 1 group are more likely to score than the teams seeded lower.

Playing the game with spinners:

Start the tournament at the Group stage.

Choose the correct spinners for the two teams, spin to find the final score, then record that on the Tracker chart.

Once you've played all the matches in the Group stage, add up the points for each team (three points for a win, one for a draw, none for a loss), and the number of goals scored and conceded. The difference (goals scored less goals conceded) is the goal difference that should be written in the final column. Write the final result of the Group in the table below the list of matches - so, the team with most points in first place, second most points in second and so on. If teams are level on points, use goal difference to decide who takes the higher place. If the goal difference is the same, use goals scored. Now you put all the teams that have qualified from the Group stage into the next round. The qualifying teams are all the Group winners and runner ups. Our Tracker chart makes it easy to put the teams in the right match - for example, you can see where the Winner of Group A should be written in.

Playing the remaining rounds should be straightforward.

Playing the game with dice:

Print out the dice chart. The dice chart converts the number rolled on the die to the number of goals scored. To make the game more realistic, the chart has been designed so that teams in the seed 1 group are more likely to score than the teams seeded lower.

Play the game as above, rolling the die and reading the goals scored off the dice chart instead of spinning the spinner.

If you want to make the game simpler you can play the game without seeds. Simply use the number rolled on the die to be the number of goals scored. 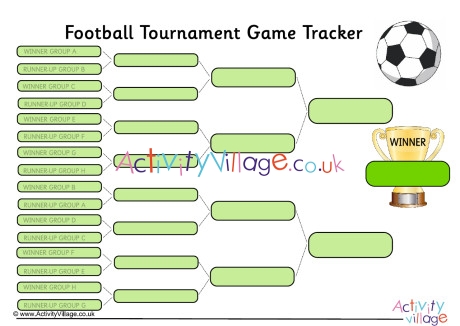 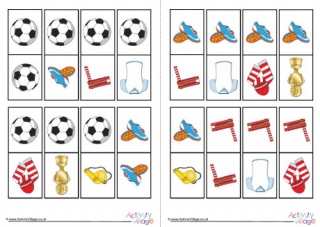 Print out this set of football-themed dominoes and enjoy a game! You can print onto card and laminate, or glue each page to a piece of craft foam before cutting out to give the dominoes a bit of thickness. 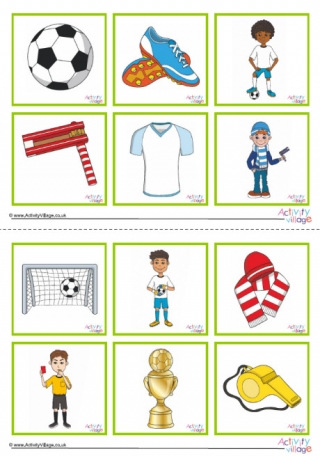 Use these football game cards for matching or memory games, hide them for a treasure hunt or trail, or play snap! 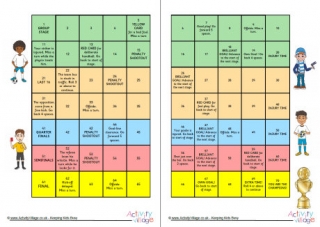 This football board game is quick to print and fun to play!