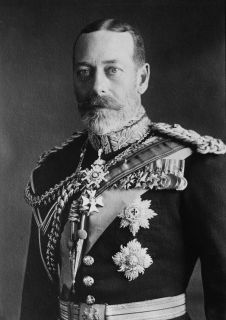 George V (1865 - 1936) became king in 1910 on the death of his father, Edward VII, and ruled into 1936. He was not raised as heir to the throne as he had an older brother, Albert, who died in 1892. He therefore had a less pressured childhood and joined the Royal Navy as a young man, serving for 15 years and travelling widely, eventually commanding his own ship before he was recalled to England when Albert died to take up the responsibilities of heir to the throne. Shortly afterwards it was arranged that he would marry his brother's fiance, and the wedding took place in 1893. Despite the fact that it was arranged, the marriage was a genuine love-match and very successful and Queen Mary was a popular and well-respected addition to the royal family.

During the First World War (1914-1918) the king made hundreds of visits to the Fleet and Army, to hospitals and to factories, and did as much as he could to boost morale and support the war effort. He and the Queen even publicly gave up alcohol for the duration of the war as an "example" to factory workers! Towards the end of the war, because of anti-German sentiment, George decided to change the royal family's name from Saxe-Coburg-Gotha (from his grandfather Prince Albert) to Windsor.

In 1932 a new tradition was started when King George sent a Christmas message to the nation, broadcast on radio - the first direct contact between monarch and people. Now of course the Queen delivers her Christmas message on the television each year.

King George V is now regarded as one of our greatest British monarchs, doing his duty selflessly, modestly and with dignity. In his last years he worried about the behaviour of his eldest son and heir, Edward ("After I am dead the boy will ruin himself in 12 months") and also predicted - and dreaded - another World War. He died in 1936 after a short illness. Sadly his worries were justified. 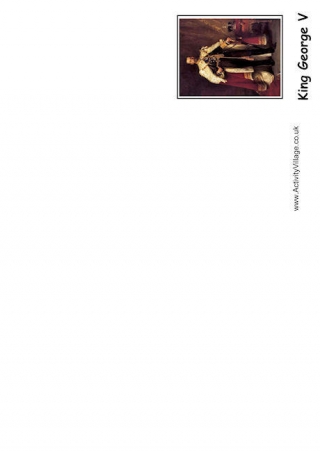 We have blank and lined George V booklets for you to record your research about the founder of the House of Windsor. 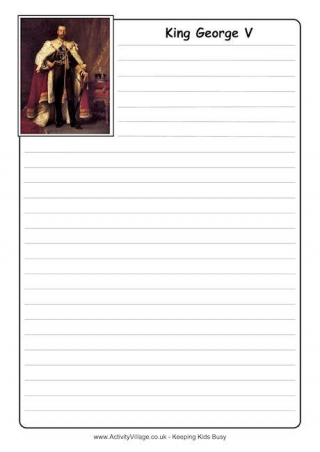