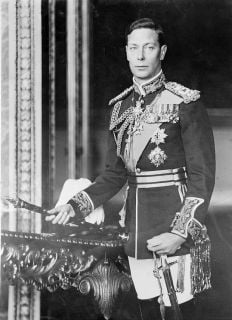 George VI (1895 – 1952) never expected to become king. In December 1936, however, his elder brother Edward VIII chose to abdicate to marry Wallace Simpson, a divorcee. George suddenly found himself taking over the role.

Christened Albert and known as Bertie, he was sickly, shy and knock-kneed as a child, growing up in the shadow of his extorvert, charming and popular elder brother Edward. He developed a profound stammer at the age of eight, which he was to struggle with for the rest of his life. He did, however, have a sense of humour and became known for his practical jokes. As a young man he served first in the Royal Navy and then the Royal Air Force during the First World War.

Similar to his father in many ways, Bertie also had a serious side and was interested in welfare of the working people, visiting factories and workshops on an informal basis, and setting up Duke of York camps in which public schoolboys and inner city children spent weekends camping and hiking together. He married Lady Elizabeth Bowes-Lyon in 1923. She was self-confident and devoted, and became his rock and advisor. The couple had two children, Elizabeth and Margaret. Together with his wife and mother, George VI did much to restore faith in the monarch after the damage done by the abdication of Edward VIII.

When the Second World War began, George VI and his wife remained at Buckingham Palace for the duration (although the palace was bombed) and did much to boost morale, visiting bomb-damaged areas of London and elsewhere. George was in close touch with the Prime Minister, Winston Churchill, through the war.

George suffered from ill-health in the later years of his life. In 1952 he failed to recover after a lung operation, and died in his sleep aged 56. Princess Elizabeth was touring Kenya with Prince Philip, and returned to England to become Queen. 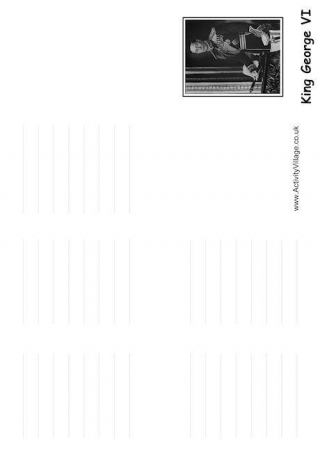 The current Queen's father George VI features on these foldable booklets.  A fun way to record information for school projects.  A guide to folding the booklets can be found here. 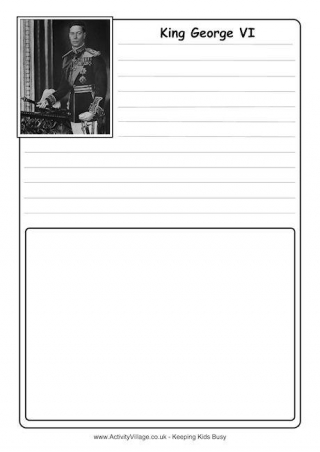 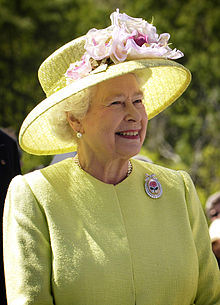