Find out a little about Ireland, enjoy our printable activities with the kids or have a go at our Irish craft ideas, and celebrate St Patrick's Day with us! 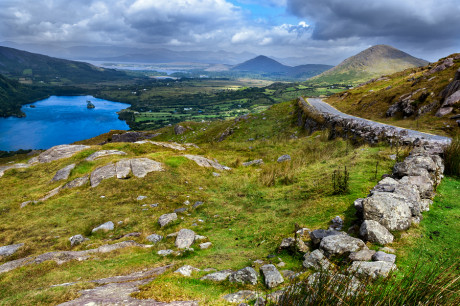 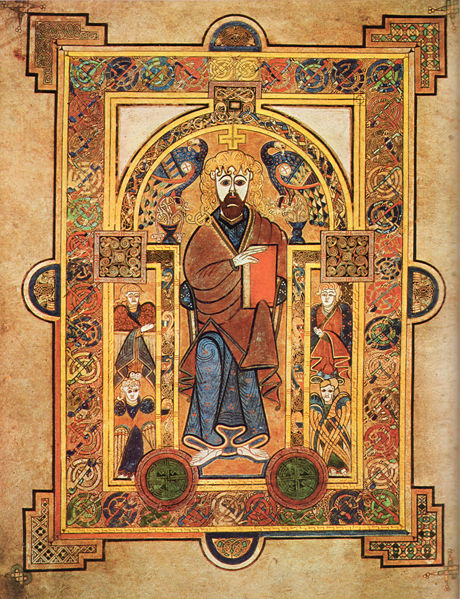 An illustrated page from the Book of Kells 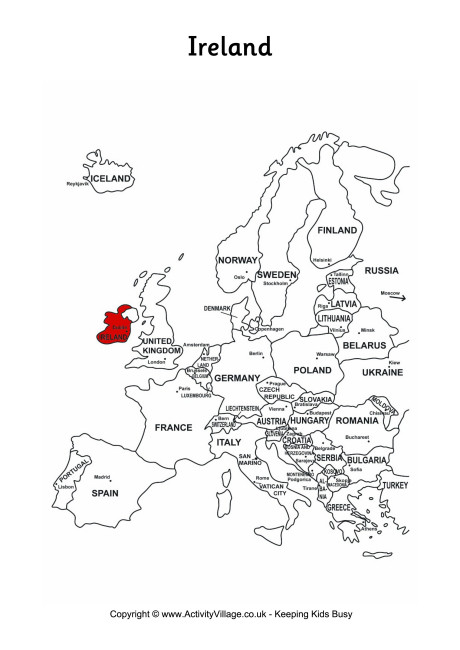 Ireland on a map of Europe. You can print this map here. 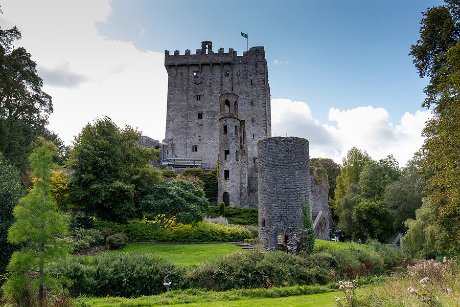 About the Irish Flag

The current Irish flag was adopted in 1919 by the Irish Republic during its war of independence. The flag is made up of three verticle stripes in green, white and orange.  The Irish government has said that the green represents the Gaelic tradition of Ireland, the orange represents the followers of William of Orange in Ireland, and the white represents the aspiration for peace between them. The flag is flown in both Northern Ireland and the Republic of Ireland.

Our Ireland Flags, Maps and Worksheets 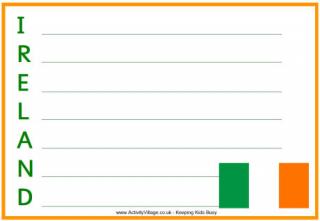 Write an acrostic poem using the letters of Ireland, and use one of these fun printables illustrated with the Irish flag! Perfect for St Patrick's Day or a patriotic occasion. 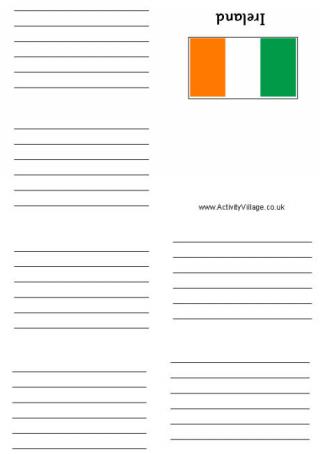 Print and fold a little booklet decorated with the Irish flag. Choose from lined or unlined. You will need instructions for folding our origami booket. 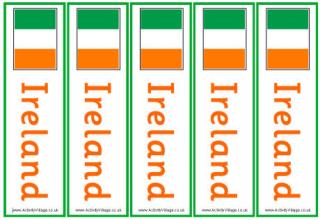 Print out this page of five Ireland bookmarks - decorated with the Irish flag. Perfect for a patriotic occasion! 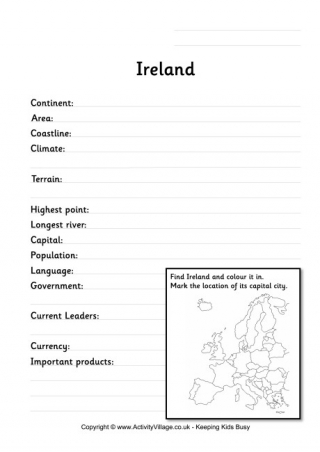 Use this worksheet to guide the kids in learning a little about Ireland, including its location and capital city. 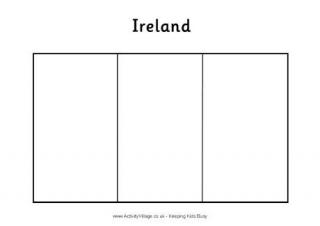 Colour in the Irish flag, making sure that you get the colours in the right order! 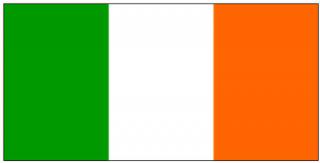 Our Irish flag printable comes in a variety of sizes so you can use it for all sorts of projects, from tiny toothpick flags to decorate cupcakes to notebook covers and bunting. 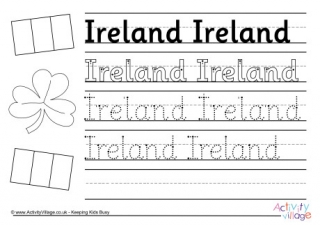 Practise writing out the word Ireland with this handwriting worksheet - useful for St Patrick's Day or perhaps a patriotic sporting occasion! 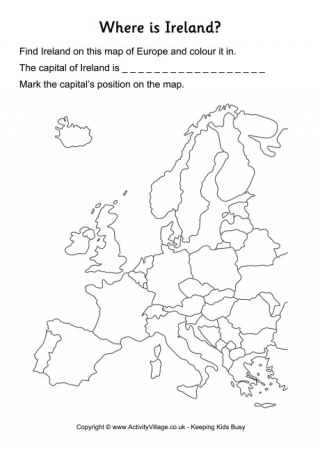 Start with our "guided" location worksheet, which asks children to find IreIand on a simplified, labelled map of Europe. Then move on to the much more difficult blank worksheet! Choose from two variations of notebooking flag for Ireland, decorated by the Irish flag. 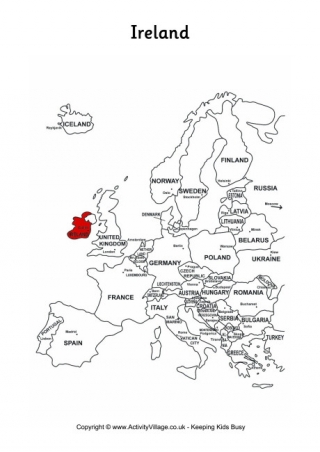 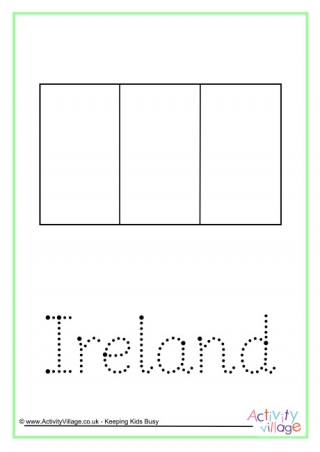 Trace the word "Ireland" with this handwriting worksheet, and colour in the Irish flag. Print it for the kids on St Patrick's Day or perhaps for a sporting occasion... 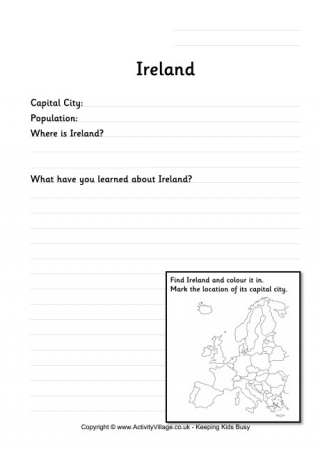 Children need to find out some simple facts about Ireland for this worksheet - a useful way of recording what they have learned. Perfect for a spot of handwriting practice on St Patrick's Day, this fun worksheet includes a picture of a leprechaun's hat to colour in, too, complete with shamrock. 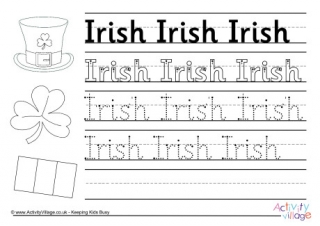 This handwriting worksheet gives the kids plenty of good practice - and is perfect for St Patrick's Day! There's a line at the bottom for writing the word unaided, and some little pictures to colour in, too. 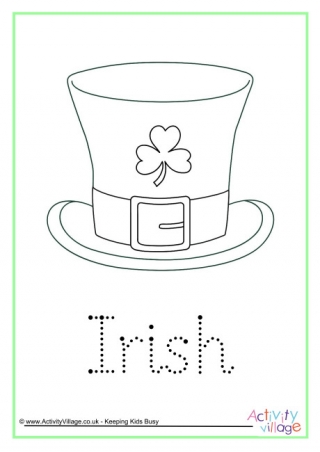 Trace the letters in the word "Irish" for St Pat's, and colour in the leprechaun's hat! Use this story paper to write about the life of St Patrick, his teachings, or perhaps about his link to Ireland or St Patrick's Day.

More Ideas for your Ireland Topic Ireland is a land of castles, many dating back to Medieval times. Most were built as homes for chieftains and for defence. The most famous is of course the 15th Century Blarney Castle in County Cork, home to the Blarney Stone which, according to legend, will give anyone who kisses it the "gift of the gab"!
Castles Nearly 99% of Ireland's land mass is rural, of which 72% is agricultural. Rich, fertile soil, a mild climate and lots of rain make Ireland perfect for farming, and in fact there are nearly 140,000 farms in Ireland. Beef and dairy are the most important, but you can spot plenty of sheep in Ireland too.
Farm and Farm Animals Leprechauns are Irish fairies who wear green clothes and make shoes. They  hide their money in a pot of gold at the end of a rainbow, but no-one has ever found one! We have lots of leprechaun activities to explore:
Leprechauns Shamrocks were adopted as the emblem of Irelaend after it became the fashion to wear them in your hat on St Patrick's Day, in the 17th Century. We have a fun selection of shamrock activities for you:
Shamrocks Have some fun with our Ireland-themed craft ideas:
Irish Crafts for Kids