Isabella Bird (1831–1904) was an intrepid and adventurous travel writer and photographer who brought exploration to the lives of ordinary people at a time when women rarely travelled – and certainly not on their own. Find out more about her and bring her story to life with our colouring pages, printables and worksheets. 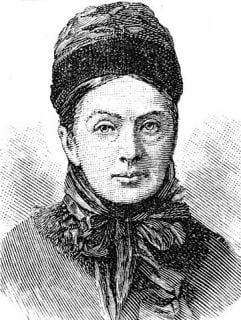 “I dreamt of bears so vividly that I woke with a furry death hug at my throat, but feeling quite refreshed.”
Isabella Bird

“A man any woman might love but no sane woman would marry.”
Isabella Bird, on her friendship with the outlaw Jim Nugent

A Short Biography of Isabella Bird

Isabella was a small, sickly child but fiercely independent. Her parents taught her and her younger sister Henrietta at home. Isabella loved to read but her enquiring mind often rebelled against her strict Christian upbringing.

At 19, Isabella had a tumour removed from her spine. She continued to suffer poor health and had bouts of insomnia and depression. Doctors recommended a sea voyage, and Isabella accompanied her cousins to America in 1854. Her father gave her £100, saying she could stay until the money ran out!

Isabella began writing letters home, and it was these letters that were used as the basis for her first book, ‘An Englishwomen in America’, published when she was 25. She formed a life-long friendship with her publisher, John Murray III, and later books took the form of letters sent to his son, John Murray IV.

Isabella’s father died in 1858 and her mother in 1866. The two daughters, who were both unmarried, had to fend for themselves. Isabella began travelling and writing to support herself.

Isabella then visited Colorado, USA, recommended for its healthy air. She rode 800 miles through the Rocky Mountains and her letters to Henrietta became ‘A Lady’s Life in the Rocky Mountains’ (1879). Her escapades included riding alone through a blizzard with her eyes frozen shut, spending a few months snowed in with two young men, and being wooed by a lonely one-eyed outlaw, named Jim Nugent!

On return home, Isabella was introduced to John Bishop, a surgeon. But she never stayed still for long – soon she was off on some Asian adventures recounted in ‘Unbeaten tracks in Japan’ (1880). Shortly after her return, however, Henrietta died of typhoid at her home in Tobermory, Mull. John Bishop was her doctor, and he asked Isabella to marry him. They were married in 1881 but John died five years later.

With some inheritance money, Isabella studied medicine so that she could travel as a missionary. She also learnt photography and her later books were beautifully illustrated with her images. At nearly 60, she set off for India, where she would co-found the John Bishop Memorial Hospital and the Henrietta Bird Hospital in memory of her husband and sister.

For her last book, Isabella travelled through China and Korea, recalled in her book ‘The Yangtze Valley and Beyond’ (1900), and later went to Morocco. A few months after her return in 1904, she fell ill and died at home. She was buried next to her parents, sister and husband. The story goes that her camera and luggage were in London, already packed for one last trip to China.

Many of Isabella Bird's books are available to read online through Project Gutenberg; her writing is easy to understand and the descriptions of her travels very interesting. However, please note, before you explore with your children, that she was a lady of her time and some of the language is very offensive and shocking in this day and age. 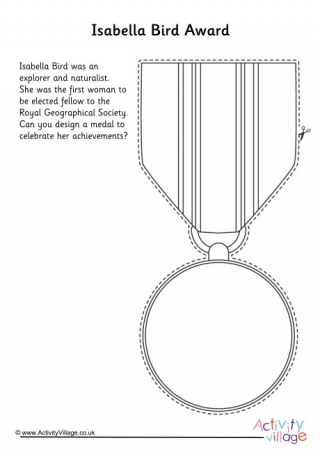 Isabella Bird was the first woman to be awarded the Honorary Fellowship of the Royal Scottish Geographical Society, and she was elected to membership of the Royal Photographic Society on 12 January 1897. 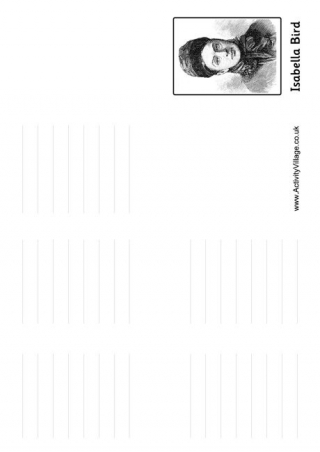 Print and fold this simple booklet and use it for storing all the information you collect about Isabella Bird. Folding instructions are here. 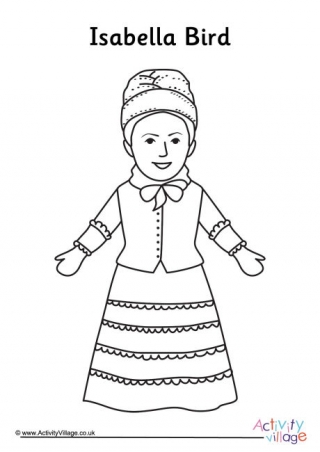 Print out this simple outline picture of Isabella Bird for the children to colour in. 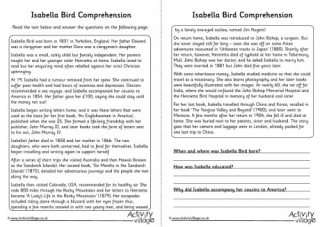 The aim of this Isabella Bird comprehension worksheet is to get the kids to read the text all about this famous traveller, then show how much they have understood by answering some questions at the end. 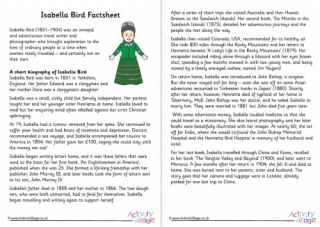 Perhaps you're not that familiar with Isabella Bird and her interesting life, or only know a little about her - you can learn some more here by reading our simple factsheet. 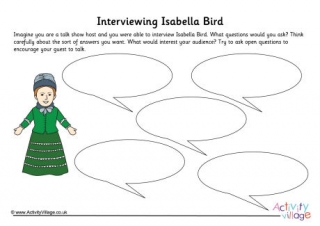 Imagine you were a talk show host and had the opportunity to interview Isabella Bird. Can you think of some good open questions, perhaps about her famous travels? 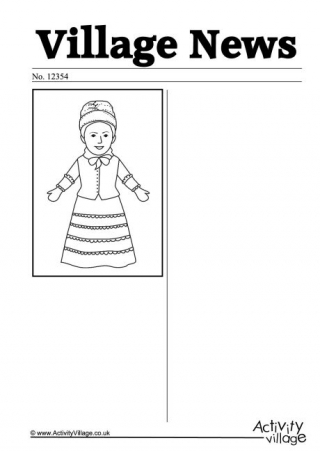 Ask the children to describe Isabella Bird's life and travels using this newspaper writing prompt, then colour in the picture of her too... 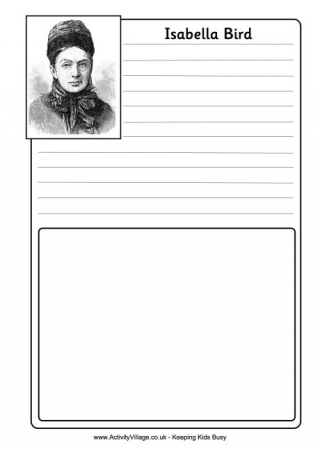 Children can use these notebooking pages to record what they've found out about the great explorer Isabella Bird. 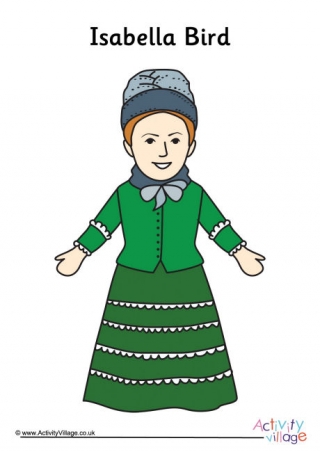 Here's a simple poster of Isabella Bird to print and display in the classroom or to use in scrapbooks and topic work. We've set a quote by Isabella Bird against a beautiful sunset on this quote poster. 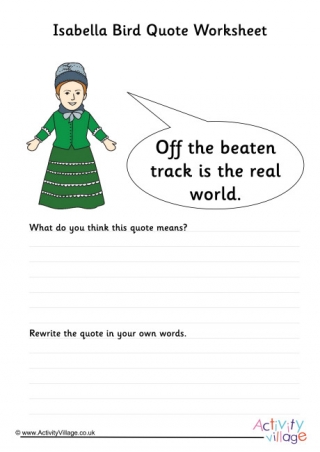 This simple worksheet featuring a quote by Isabella Bird is ideal for younger kids - they just need to write about what they think the quote means, then rewrite it in their own words too. 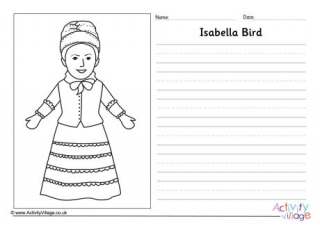 Children can use our Isabella Bird story paper to write a short biography, or maybe use it for some creative writing? We have two versions, lined and with handwriting lines. 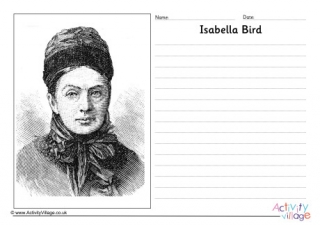 Here's a story paper featuring a portrait of explorer and photographer Isabella Bird - perfect for older kids to use for recording their research and notes. 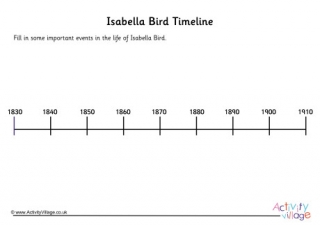 Fill in some of the important events in the life of Isabella Bird on this timeline worksheet - perhaps you can add the dates of some of her travels? 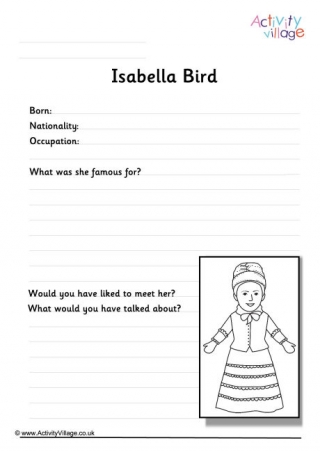 Here's a worksheet that's perfect for younger children learning about Isabella Bird. Can the children write about why she was famous, if they'd have liked to meet her and what they would have talked to her about? 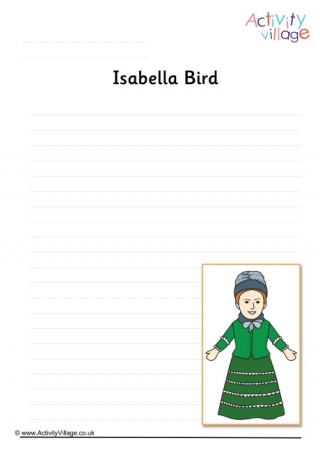 Isabella Bird was a very interesting character who had some amazing travels and adventures, so she's bound to inspire some creative writing from the kids using this story paper! Choose from lined or handwriting lines. 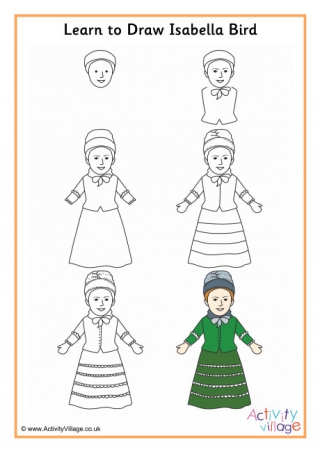 Follow our step by step instructions on how to draw your own version of Isabella Bird, the famous explorer.