Julia Donaldson (1948–) is an English writer, playwright and performer most famous for her rhyming tales for children. She has written over 150 books and more than 20 plays, and won multiple awards for her work. Julia loves to engage children in reading and performance – a skill she used as the UK’s Children’s Laureate (2011–2013). Find out more about this talented and engaging writer who has inspired children worldwide with her love of words. In 2013, Julia celebrated her new book ‘Paper Dolls’ and broke the world record for the longest paper dolls chain. With the help of her publisher, fans and volunteers, the chain measured 4,549.7 metres – about the size of 40 football pitches!

“I opened a book and in I strode.
Now nobody can find me.
I’ve left my chair, my house, my road,
My town and my world behind me…
I finished my book and out I came.
The cloak can no longer hide me.
My chair and my house are just the same,
But I have a book inside me.”

“Everyone is welcome to walk through the door.
It really doesn’t matter if you’re rich or poor.
There are books in boxes and books on the shelves.
They’re free for you to borrow, so help yourselves...
Yes, come to the library! Browse and borrow,
And help make sure it’ll still be here tomorrow.”

A short biography of Julia Donaldson

Julia Donaldson was born in London, England, in 1948, to James Shields and his wife Elizabeth. Julia grew up with her younger sister Mary in the three-storey house they shared with their cat Geoffrey, their aunt and uncle (on the first floor) and their grandmother (on the top floor).

Julia’s mother was a good singer and her father played the cello. Meanwhile, Julia and Mary loved creating characters and writing shows. On Julia’s fifth birthday, her father gave her a large book of poetry. She loved to read and recite the verses, and began writing her own poems, too. Julia knew from this moment she wanted to be a writer.

During her school years, Julia enjoyed singing and acting. She also learnt piano, and later guitar. She was good at languages, too, speaking French, German and Italian by the age of 19.

Julia went on to study Drama and French at Bristol University and it was here she met her husband, Malcolm Donaldson, a medical student. Malcolm played the guitar and they enjoyed travelling together, playing and singing (busking) on the streets. They began to write songs tailored to the many countries they visited. After their travels, Julia worked as a secretary for a publisher and began taking on junior editor roles, too. She then worked as a secretary at Radio Bristol where she also helped with the editing/producing of short stories.

Julia and Malcolm married in 1972. They moved to Brighton in 1974, where Julia continued her editorial work. By this time, Julia had also sent a tape of her songs to the BBC and she began writing songs regularly for children’s television programmes, such as Play Away and Play School. She became very good at writing songs on all manner of topics! In the late 1970s, Julia also worked as an English teacher for two years, until her first son (of three) was born. Malcolm continued to work as a doctor, and in 1983, his job took the family to Bristol, and later to Glasgow.

Julia’s big break came in 1993, when a publisher asked to turn one of her songs for television – A Squash and a Squeeze – into a children’s book, illustrated by talented German artist, Axel Scheffler. Julia realised her songs and plays could be channelled into successful storybooks for children.

Perhaps Julia’s most famous book – The Gruffalo – was written in 1999 with Axel’s illustrations. The story was inspired by a Chinese tale of a little girl who avoids being eaten by a tiger when she claims to be the Queen of the Jungle. The Gruffalo has now been translated into over 40 languages, sold more than 10 million copies, and has appeared on both stage and screen. Many more books followed including Room on the Broom (2001), The Snail and the Whale (2003), Tiddler (2007) and The Scarecrows’ Wedding (2014). Julia is most famous for her books illustrated by Axel Scheffler, but has also written novels for older children and teenagers, and worked with many talented illustrators including Lydia Monks, David Roberts and Nick Sharratt.

In 2011, Julia was awarded an MBE for her services to literature, and the same year was named the UK’s Children’s Laureate (2011–2013). In this role, she encouraged a love of reading in children, through the performance of plays and poetry, which she believes greatly improves children’s reading and confidence. Julia also campaigned to save public libraries.

When Julia isn’t writing, she’s found visiting schools and libraries, performing at book festivals and theatres, and is the patron of many literary charities. In 2014, she and Malcolm moved to West Sussex. Can the children design a medal to commemorate author Julia Donaldson's many achievements? Have you recently read a book by popular author Julia Donaldson? A book report is a great way to tell others about a book that you've enjoyed. Colour in this fun picture of children's author Julia Donaldson, and don't forget to colour in the Gruffalo, too! Can the children read this short piece of text all about children's author Julia Donaldson, then extract the information they need to answer the questions at the end? You might be familiar with Julia Donaldson's lovely books and tales, but how much do you know about the author herself? Learn a little more with the help of easy-to-read factsheet. Ever wondered what it's like to be an award-winning author? Our fun worksheet asks the kids to imagine they can interview Julia Donaldson for a talk show. What will they ask her? Here's a fun cartoon-style poster of Julia Donaldson (and the Gruffalo too), to print out and display. This lovely quote by Julia Donaldson all about books and libraries is perfect for displaying in a reading corner or school library. "I opened a book and in I strode. Now nobody can find me." Can the kids write about the meaning of this great quote by author Julia Donaldson, and then rewrite it in their own words? Julia Donaldson is fantastic children's author, and this fun story page featuring an illustration of her holding the Gruffalo should encourage the kids to write their own creatives stories too. Or use for handwriting copy work from one of her books. Use this simple story paper when writing about favourite children's author and poet, Julia Donaldson. 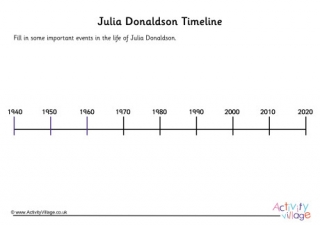 Find out some facts about Julia Donaldson, the children's author, and add them to this timeline worksheet. We've hidden the titles of 18 Julia Donaldson stories inside this wordsearch grid - can the kids find them all? Here's a simple worksheet aimed at younger children, asking them to find out a few facts about Julia Donaldson. Would the kids like to meet her too and what would they discuss with her? Write about Julia Donaldson with this printable writing page, available in colour or black and white. Here's a fun step-by-step guide to drawing popular author Julia Donaldson, holding a toy of her well-known creation, the Gruffalo! What makes a good picture book? We all have favourite picture books in childhood, and this fun worksheet asks the children to imagine they are a publisher giving some advice on the dos and don'ts for writing one.