Learn a little about Julius Caesar and enjoy our collection of printable activities and worksheets designed to engage children and encourage them to learn more about this most famous of Roman generals! 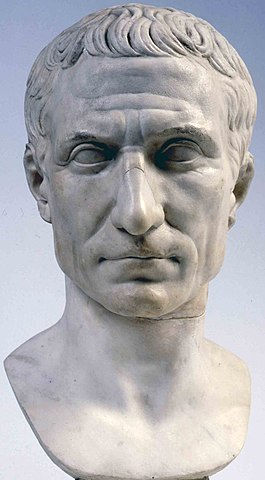 Julius Caesar (100 BC–44 BC) was a politician and general in Ancient Rome who helped build the powerful Roman Empire. He made enemies along the way and was eventually assassinated just a year after he was declared “dictator for life”.

“Experience is the teacher of all things.”
Julius Caesar

A short biography of Julius Caesar

Childhood
Julius Caesar was born in Rome in 100 BC to a respectable family and had a typical childhood, taught by a tutor from the age of 6 and learning useful leadership skills such as Roman law and public speaking. When he was 16 his father died and he became “the man of the house”.

Early career
Before he was even 20, Julius managed to anger the dictator of Rome, Sulla, and had to flee. He joined the army and became a great military man, winning the love and loyalty of the men he commanded. When Sulla died in 78 BC, Julius returned to Rome, poor but ambitious, and worked his way up through the ranks of government. He was a great speaker and popular with the people, but he also played the political game and made powerful friends such as Pompey, a great general.

Success
Pompey helped Julius progress his career and he was appointed Governor of Spain. At the age of 40, Julius was elected consul, the highest position in the Roman Republic. Consuls were elected in pairs and served for 1 year. At the end of his term he was appointed as Governor of Gaul (now France and Belgium), where he was very successful, subduing the whole region and bringing it under Roman control. He was less successful in his attempts to claim Britain, in 55 and 54 BC.

Meanwhile, in Rome…
Pompey and the Roman Senate – the body of 300 aristocrats who helped govern Rome under the Consuls - felt threatened by Julius’ success and his army. When Julius was up for re-election, Pompey ordered him to disband his army and return to Rome. But Julius didn’t trust Pompey and came back to Rome in 49 BC with one legion of his army. It was war between them!

Civil war
Pompey had the support of the Senate and Caesar had the support of the people. Julius’ quickly took control in Rome and, after 18 months fighting, eventually defeating Pompey’s much larger, better equipped army. Pompey fled to Egypt where the Egyptian pharaoh, Ptolemy, had him assassinated, sending his head to Julius! Ptolemy hoped that Julius would show his thanks by siding with him against his sister Cleopatra. Instead, Julius supported Cleopatra and they even became lovers and had a son together, Caesarion.

Temporary triumph
Julius returned to Rome in 46 BC, the most powerful man in the world, and was soon appointed “dictator for life” by the Senate - which he had filled with his supporters. But when Caesar began to take more and more power, the Senate became anxious. A plot was hatched and Julius was assassinated by a group of Senators, stabbed more than 20 times!

Influence
Julius’ influence was long-standing. The name Caesar was adopted to mean ‘leader’ in different languages, such as the Russian ‘czar’ and the German ‘kaiser’. The Roman Empire went on to control a third of the world’s population, and to shape many of the civilisations that we know today.

Our Julius Caesar Activities and Worksheets 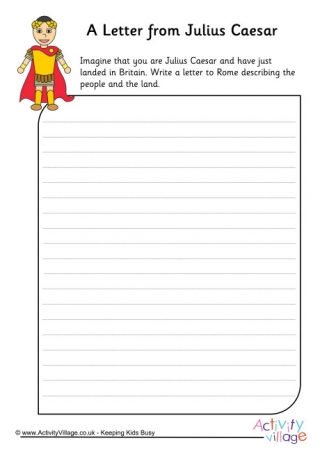 Here's a history worksheet to get the kids thinking. Can they imagine that they are Julius Caesar and have just landed in Britain, and write a letter to Rome describing the people and land? They might need to do a little historical research before completing the worksheet. 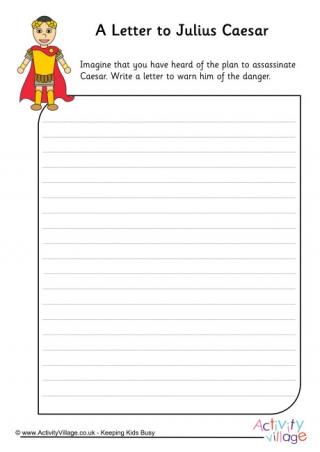 Many people in Rome thought that Julius Caesar was becoming too powerful, and planned to assassinate him. This worksheet asks the kids to imagine they are back in Roman times and have heard of the plan to kill him - can they write a letter to warn him? 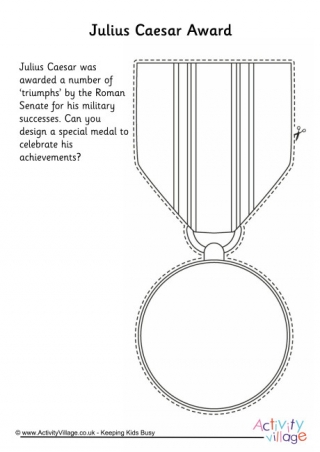 Julius Caesar was a successful general who received many awards from the Roman Senate for his military achievements - but can the kids design their own award for him? 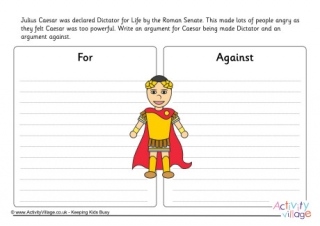 Here's a thought-provoking worksheet that's ideal for older children studying Julius Caesar and the Romans. Julius Caesar was declared Dictator for Life by the Roman Senate, which made him unpopular amongst many Romans who thought he had become too powerful. 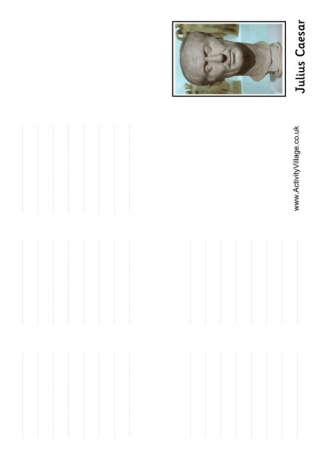 Print and fold this little origami booklet to store your research and thoughts on Julius Caesar, the famous Roman general. You will need our origami booklet instructions. 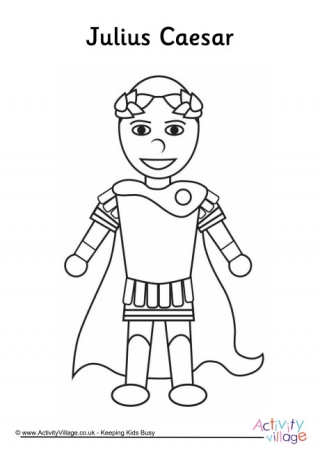 Here's a simple cartoon-style drawing of Julius Caesar, great for younger kids to colour in. Perfect as part of topic work on the Romans. 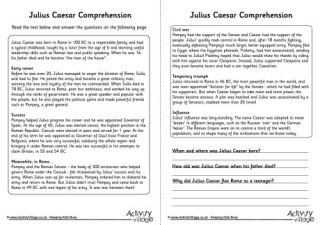 This Julius Caesar comprehension worksheet is aimed at older children. They need to read the text and then use it to answer the questions - perfect for topic work on the Romans, and for practising reading and comprehension skills too. Our Julius Caesar factsheet is a great introduction to the famous Roman general and leader, and perfect for learning a few facts about his life. Here's a fun worksheet that helps bring Roman history to life and gets the kids really thinking. Can they imagine they are a talk show host interviewing Julius Caesar? They need to think carefully about the best questions to ask and how to phrase them... 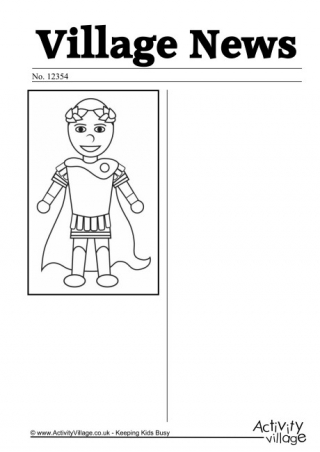 Ask the children to describe Julius Caesar's eventful life and his achievements using our newspaper writing prompt, and then colour in the picture of him too... We have two Julius Caesar notebooking pages available to download, one with lines and one with space to draw a picture too. Perfect for recording information about the famous Roman leader. This colourful poster shows Julius Caesar looking splendid in gold and red! Print out to use as part of displays about the Romans, or cut out and stick in topic workbooks. "Experience is the teacher of all things". This stunning poster features a quote from the Roman general and leader Julius Caesar, and although his quote is now thousands of years old,  many of us may find it relevant in modern times too... "The evil men do lives after them. The good is oft interred with their bones,". Can the children think about what this famous quote by Julius Caesar means, and then write it in their own words on this quote worksheet? Julius Caesar was a brilliant military general. Perhaps the kids can use this story paper to write about how he successfully invaded Britain or Gaul (France)? Or they could write down some interesting facts about his life... Ask the kids to fill in the important events in Julius Caesar's life on this timeline worksheet. Here's a simple worksheet for the children to fill in, all about Julius Caesar.  Can they write a few lines about why he was famous, if they'd like to meet him and what they would talk about if they did meet him? Choose from colour or black and white versions below. Record some facts about Julius Caesar on our writing page, or maybe do some creative writing based on his life? Available in colour or black and white. Julius Caesar helped to build ancient Rome into a mighty empire. With our step by step guide, children can learn to draw him.