Learn about Wales , its land, its history and its people with our fun range of worksheets and printables. 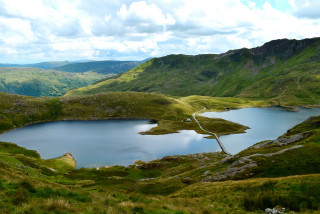 Our "Learn About Wales" Resources 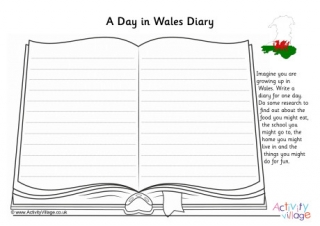 Can you imagine what a day living in Wales is like? Do some research into life in Wales then write a diary entry on this worksheet. 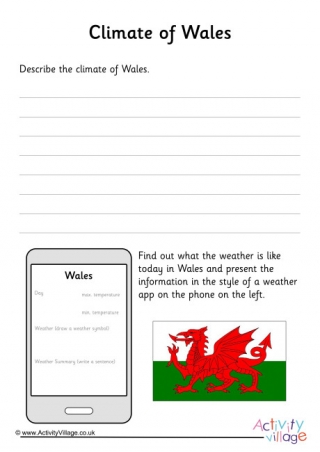 Do some research into the climate of Wales and write about it on this worksheet. Then have some fun filling in the 'phone app' template with the forecast in Wales today! 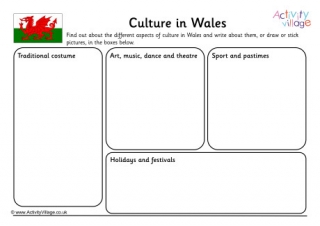 Did you know that the world's largest arts and literary event is held in Hay-on-Wye, Wales each spring? Find out about more aspects of culture in Wales, and write them down on this worksheet. 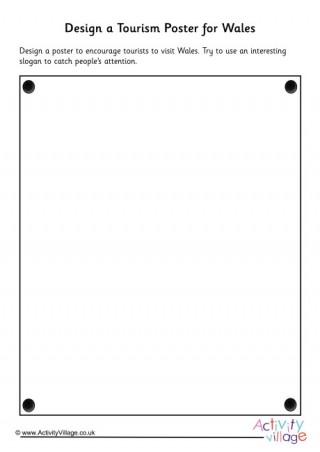 Choose an interesting slogan to attract tourists to Wales and use it as the focal point for a tourism poster. You might want to add some pictures, too... 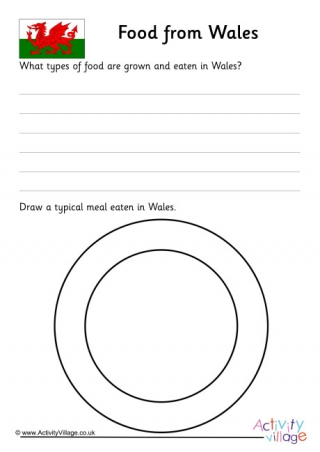 Find out about the types of food grown and eaten in Wales, then draw a special meal on the plate. You could try looking at our Welsh Recipes for some inspiration, too! 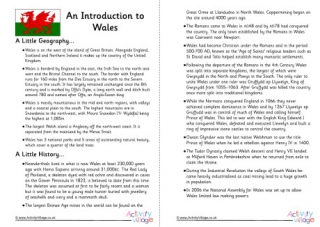 Wales has both amazing scenery and fascinating history. Find out a little more by reading our 'Introduction to Wales' factsheet - and you might learn a few fun facts too... 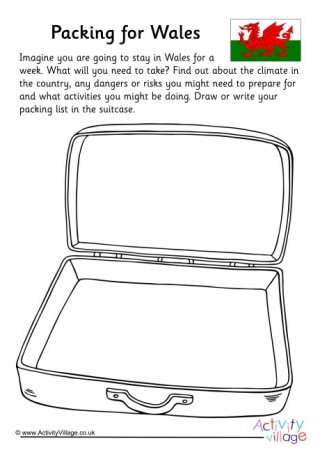 Wales is a beautiful country to visit, but the weather can vary quite a lot! Think about what you would need for a trip there, then 'fill' the suitcase... 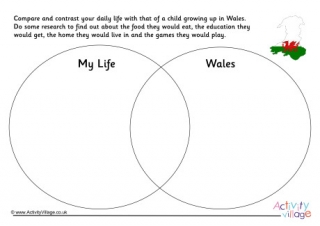 A Venn diagram is a great tool for brainstorming and creating a comparison between two or more things. Use this Venn diagram to compare and contrast your own life with life in Wales!

How do you think your life compares and contrasts with someone living in Wales? Use this helpful worksheet to find out... 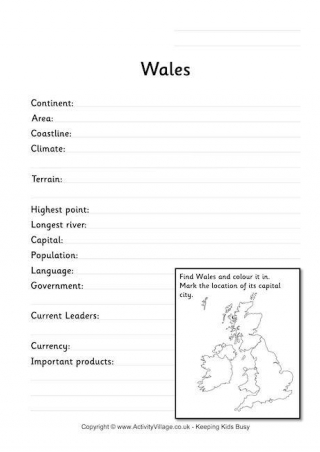 This Wales worksheet prompts children to find out some facts about Wales, and study its location in the United Kingdom. 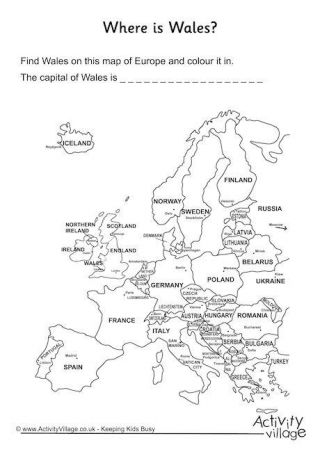 Find Wales on a map of Europe on this location worksheet. Choose from the very difficult blank version, or the guided worksheet which has all the countries of Europe (and their capital cities) marked on it. 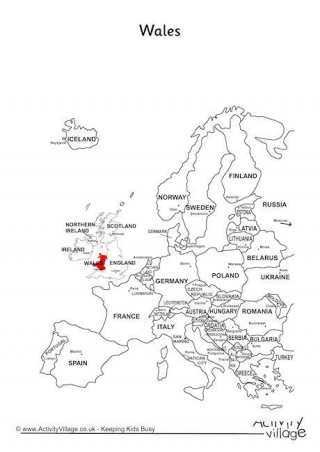 Here is a printable map of Europe (simplified) with countries and capital marked, and the position of Wales highlighted in red. 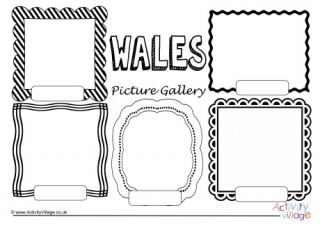 This Wales picture gallery printable would be great for creating memories of a holiday, and there's space for 5 drawings or photos... 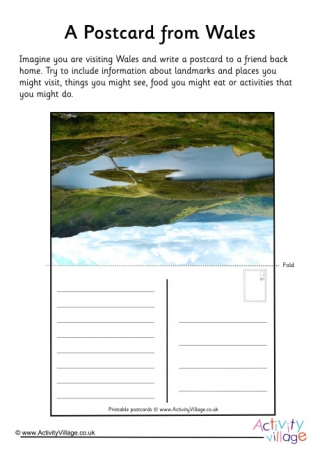 We've provided a stunning photograph of Wales on this printable postcard template, so you just need to write the content of the postcard and the address (don't forget the stamp!)... 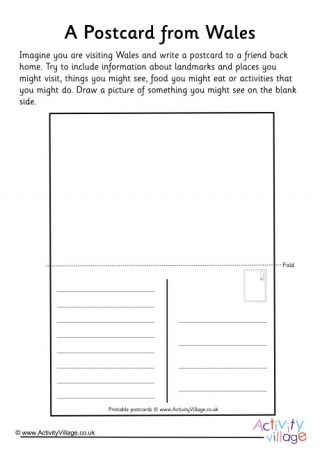 This fun printable has everything you need to create your own postcard from Wales. There's space for a picture, writing, an address and of course the stamp! 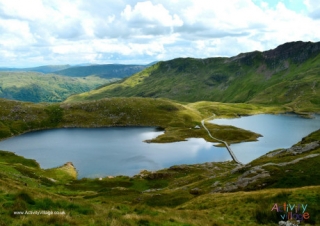 Here's a stunning poster of some mountains and a lake in Wales. Print using the borderless settings on your printer for the best results, then use in displays. 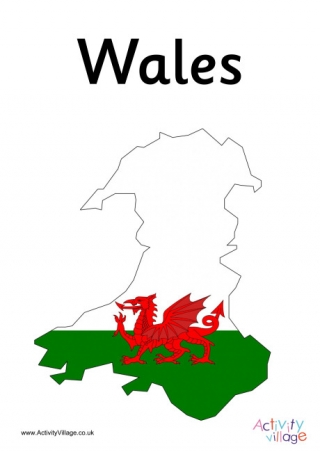 We've combined the unusual flag of Wales with the outline shape of the country on this simple but effective poster. 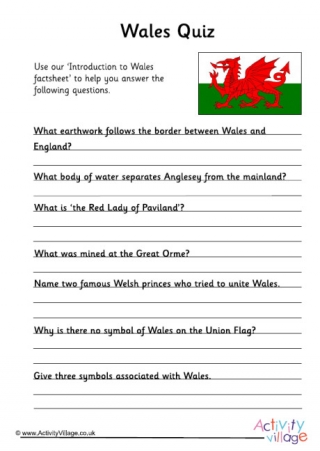 How much do you know about Wales? Try taking our quiz to find out (our Introduction to Wales factsheet might help you with the answers). 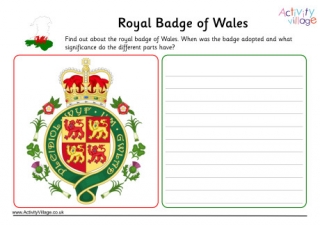 The Royal Badge of Wales is very intricate and quite pretty! Can the kids find out about the badge, including when it was adopted and the meaning of the different parts? 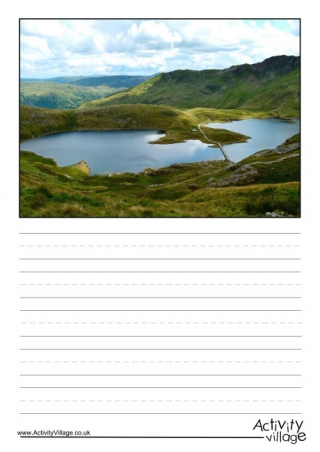 Write a mystical tale of dragons set in the Welsh mountains on this story paper perhaps? Or write about a holiday you might have been on in Wales. 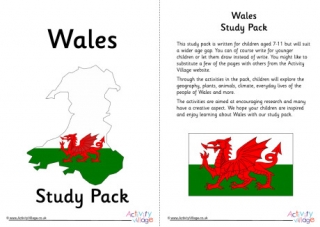 Take a trip to beautiful Wales with our fun study pack! It's full of educational resources and fun creative activities. 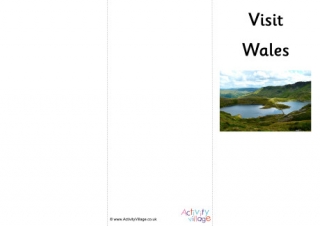 This fun printable allows the children to come up with a design for a professional-looking 3-fold tourist leaflet all about Wales. 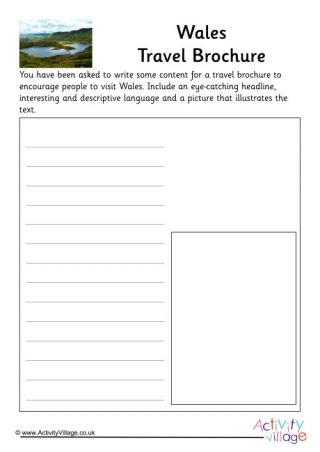 There are lots of fantastic reasons to visit Wales! Can the children include some of them in a Travel Brochure, and draw a picture to go along with the text? 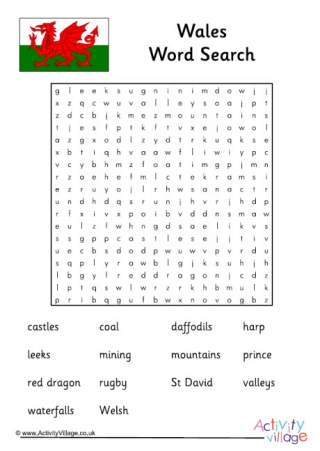 Can you find the hidden daffodils, valleys and other Wales-themed words that we've placed inside our Wales wordsearch grid? Solution available below... 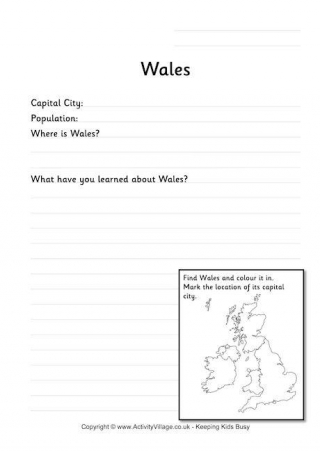 Find out some simple facts about Wales and record them on this worksheet, which includes a location activity. 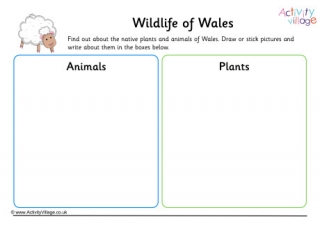 We were lucky enough to see a lizard on a camping trip to Wales last year, and of course, Wales is famous for beautiful daffodils, but can you write about the other animals and plants found in Wales?