Our learn to draw Ancient Greece printables feature some delightful cartoon illustrations of Greek gods, heroes and buildings.  Whether you are learning more about Greece for a holiday, history project or perhaps for the Olympics these tutorials are sure to add a bit of fun. 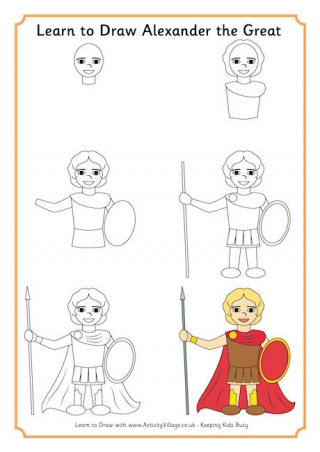 A hero of Ancient Greece, Alexander the Great conquered a huge empire.  Now you can draw him by following our step by step tutorial. 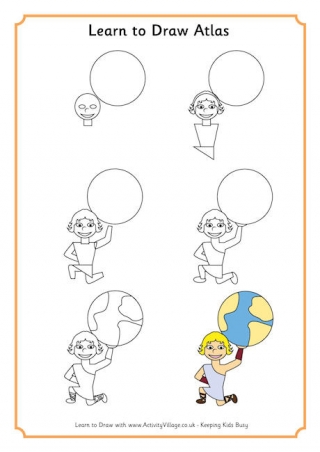 Showing Atlas holding up the Earth our printable learn to draw Atlas guide is a new and fun was to learn about Greek myths. Half human, half horse a centaur is a challenge to draw.  Here is a learn to draw a centaur tutorial for you to print and follow

Use this fun printable step by step drawing tutorial to learn how to draw a cartoon cupid - perfect for Valentine's Day! Cyclops with their one eye are one of the recognisable creatures of Greek mythology.  Our printable learn to draw a cyclops tutorial with guide you through the stages to draw your own cyclops. 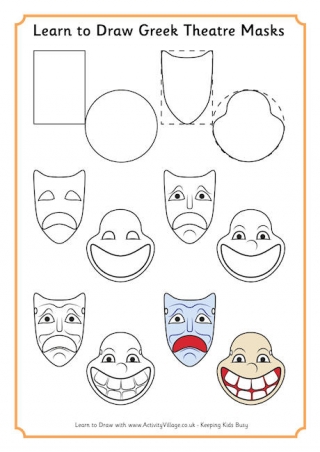 Our learn to draw Greek theatre masks printable guides you through the steps to draw two masks; one happy, one sad. 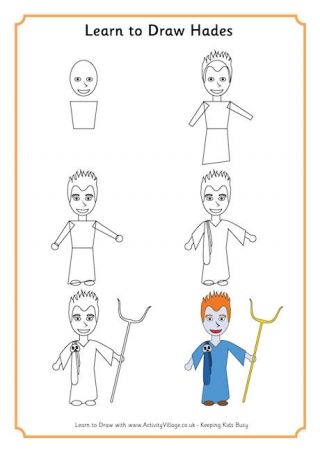 Here's a printable step by step tuorial to learn to draw Hades, God of the Underworld.  When you have finished colour him in to make him really scary. Ready to defend Greece with his spear, round shield and plumed helmet, here's a Geek Hoplite soldier for you to learn to draw. Follow this step by step tutorial to learn to draw the hydra, the many headed serpent of Greek mythology. Medusa, the Gorgon with snakes for hair, features on this learn to draw printable tutorial.  Don't forget to colour her in when you've drawn her! Are your children learning about Ancient Greek myths?  Perhaps they are having a go at retelling them.  Perhaps they could use our learn to draw the Minotaur guide to help them illustrate their own version of the labyrinth myth. Learn to draw the Parthenon, the temple that stands on the Acropolis of Athens.  With it's classical columns and straight lines this is a simple introduction to our learn to draw printables. When I was younger I desperately wanted a Pegasus as a pet!  Now, you might not be able to own one - but at least if you follow our step by step learn to draw pegasus guide you'll be able to draw one. Practise your drawing skills by following our printable learn to draw Poseidon tutorial.  Work through the stages one by one and you will soon have your own God of the Sea. The Greek goddess of love, Venus, is the subject of this learn to draw tutorial - just one of our set of learn to draw ancient Greece pictures. Standing majestically with his thunderbolt here is Zeus, King of the Gods of Olympus.  Can you work your way through our step by step guide to learn to draw Zeus?  Be prepared to take your time it is challenging.

More from our Ancient Greece Topic...