Messi fans will enjoy the fun resources below! Learn all about his life and career, enjoy our printables, colouring pages and worksheets - and even learn to draw this great Argentinian footballer! 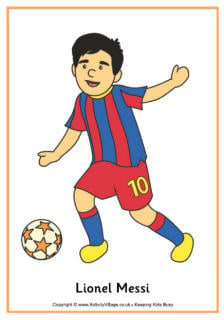 Lionel Messi is thought by many to be the best footballer in the world now, and some people think he may be the greatest footballer of all time. What makes him special?

"You have to fight to reach your dream. You have to sacrifice and work hard for it."

"I always thought I wanted to play professionally, and I always knew that to do that I'd have to make a lot of sacrifices. I made sacrifices by leaving Argentina, leaving my family to start a new life. I changed my friends, my people. Everything. But everything I did, I did for football, to achieve my dream."

"There's nothing more satisfying than seeing a happy and smiling child. I always help in any way I can, even if it's just by signing an autograph. A child's smile is worth more than all the money in the world."

A Short Biography of Lionel Messi

Lionel, or "Leo" as he is called, was born in Rosario in Argentina in 1987, the third of four children. His family loved football and he played often with his older brothers and cousins. He started playing for his local club aged four, coached by his father, and moved to another youth team, Newell's Old Boys, aged six. In the next four years his team only lost one match and Messi scored over 500 goals, entertaining the crowd with ball tricks during half-time during home games!

When he was just 10, Messi, who had always been small for his age, was diagnosed with growth hormone deficiency and needed expensive treatment. Barcelona Football Club agreed to pay for his medical bills if he move to Spain to enrol in their youth academy, so Messi and his father did just that when he was 13 years old. By 2005, aged 18, Messi was playing for FC Barcelona's first team, became a Spanish citizen and also made his debut with the Argentina team.

Messi's football career has been extraordinary. By the 2006-7 he was beginning to be recognised as one of the best players in the world, despite a number of minor injuries, and the 2008-9 season, by which time he was Barcelona's highest paid player, was possibly his most successful. He was now so important to the team that he was given his own personal physiotherapist to travel with him and keep him free of injuries! He continued to improve during 2010 and 2011, and won all sorts of records in 2012 - including the most goals ever scored in a calendar year! The next couple of years were quieter as he had problems with leg injuries, but he came back to form in 2014 and 2015.

Although Argentina is immensely proud of its famous footballer, Messi hasn't been able to take his country to victory in any major international title. Perhaps this year's World Cup will be the one!

Messi has not always been without controversy. He and his father were investigated for tax fraud and, although he denied knowledge of any wrongdoing, in July 2016 he was found guilty and sentenced to 21 months in prison. In Spain, first offences under 2 years are "suspended" so he did not actually have to go to prison.

Messi is heavily involved in charitable work. In 2007 he established the Leo Messi Foundation which helps vulnerable children (particularly in Argentina) receive education, health care and opportunities to take part in sports. He has also been a goodwill ambassador for UNICEF since 2010.

In 2017 Lionel married longtime girlfriend Antonella Roccuzzo, who he had known from the age of 5 in Rosario! The couple have two boys, Thiago and Mateo. 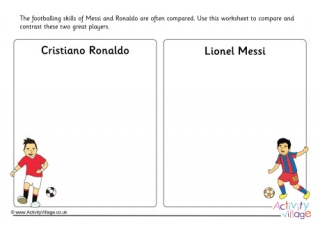 It's not surprising that the football skills of great footballers Ronaldo and Messi are often compared. This worksheet allows the kids to have their own go at it. 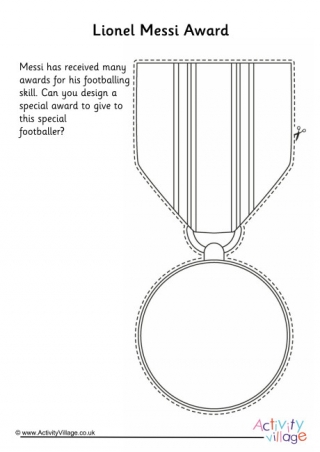 What would an award for Lionel Messi look like, if the kids could design it? Find out with this creative worksheet idea. 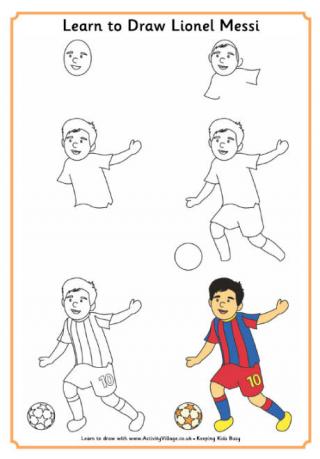 It's not too difficult to draw your favourite footballer, if you follow along with out step by step tutorial! Even the football legend Lionel Messi is straightforward, although the kids might need to practise a little... 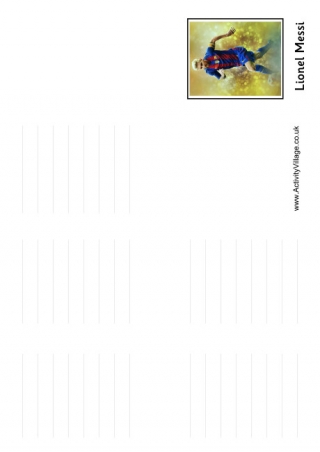 Print and fold this little booklet for the kids to record everything they learn about world-class footballer Lionel Messi. 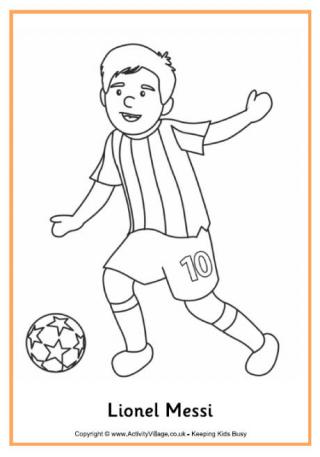 Have some fun with this simple Lionel Messi colouring page, aimed at younger children. He's such a football hero! 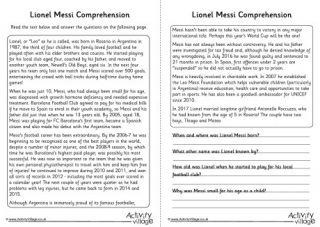 Kids can read about Lionel Messi - his life and achievements, and then answer some questions to see what they have understood and can remember. 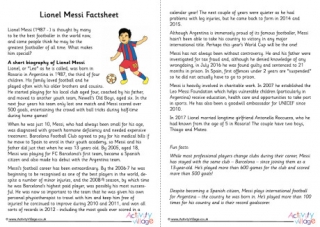 Here is a print out of our "short biography of Lionel Messi" that you can read with the kids and use with our collection of Messi worksheets and printables. 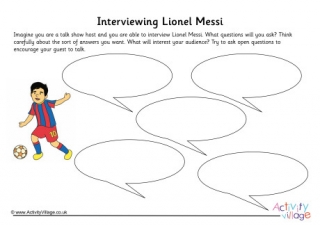 This interesting worksheet asks children to put themselves into the position of an interviewer talking to Lionel Messi, and think about what questions their audience might want answered. 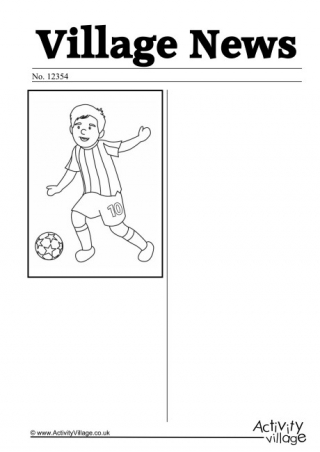 Leo Messi has broken so many football records, one of them is sure to make a great story! Get the kids to write their own newspaper story with the help of this worksheet. 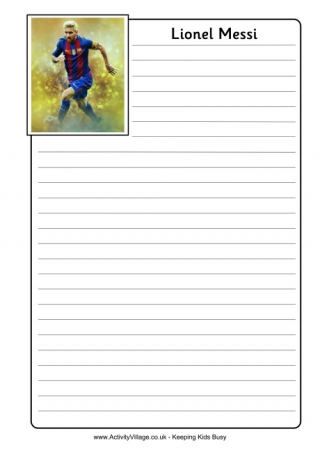 Here are 2 notebooking pages to choose from, perfect for writing about football hero Lionel Messi. 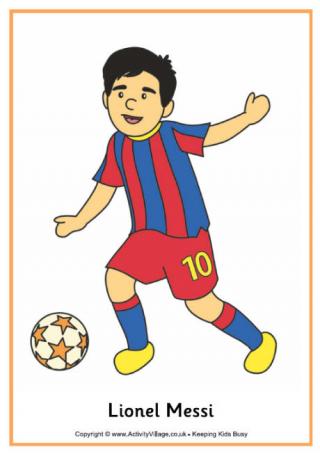 This poster of Lionel Messi would be great displayed on the wall of a bedroom or playroom, for a young football fan! 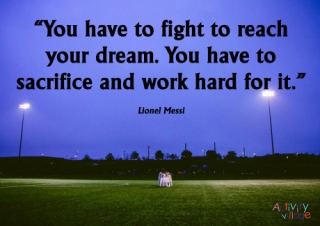 This inspiring quote poster features a quote from one of the world's greatest footballers, Lionel Messi. He certainly sacrificed and worked hard to achieve his success. 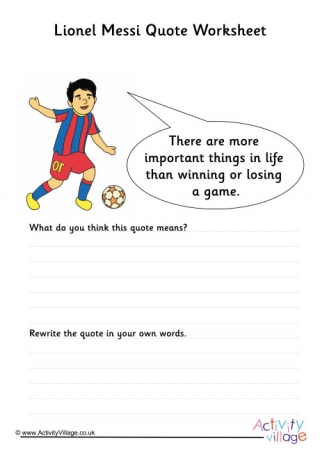 There are more important things in life than winning or losing a game. If even Lionel Messi thinks this, it must be true! Use this fun worksheet with the kids to get them thinking. 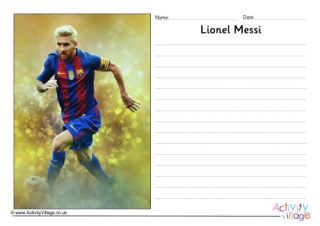 This story paper page might be just what you need for older kids to write about their football hero, Lionel Messi. 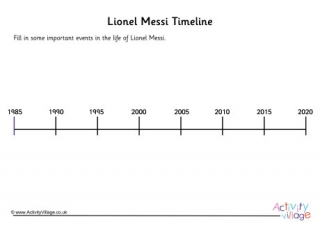 Learn a little about Lionel Messi and then put the key facts of his life on this timeline. 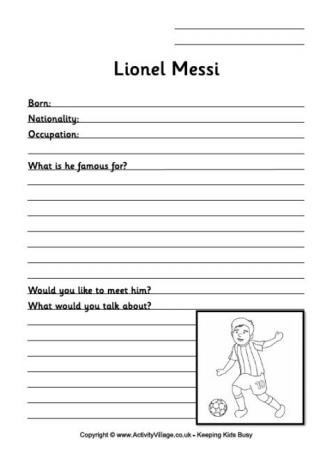 Can the kids find out the facts they need in order to fill in the blanks in this fun worksheet? Then they need to think about what they might say to Lionel Messi, if they were ever lucky enough to meet him... 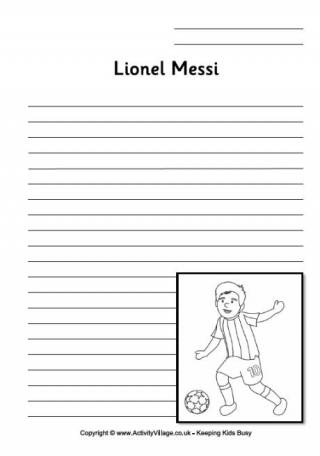 We are sure that fans of Messi will enjoy writing about him using these printable writing pages - either in colour or black and white. Perhaps they can write about why he is a hero of theirs, or make up a story in which he is the protagonist? 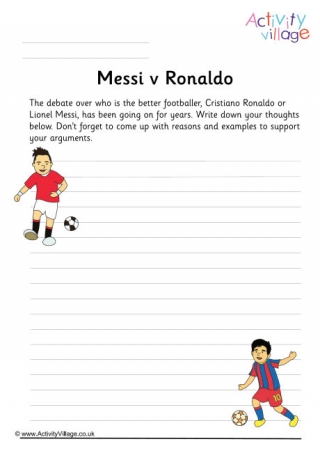 Is Cristiano Ronaldo or Lionel Messi the better footballer? Kids can use this worksheet to come to their own conclusions and discuss. 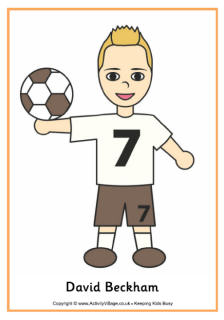