Louis Braille (1809–1852) is famous for creating a special alphabet for the blind and visually impaired. His system – known as braille – has now been adapted for almost every language as a globally recognised code for the blind to read and write. Louis lost his sight as a child but gained a good education, and went on to give blind people the gift of independence and a chance to learn for themselves. Find out more about his story and enjoy using our printable resources below.

World Braille Day is celebrated every year on Louis Braille's birthday - 4th January. It's a good excuse to learn about this extraordinary man and explore our braille activities below. 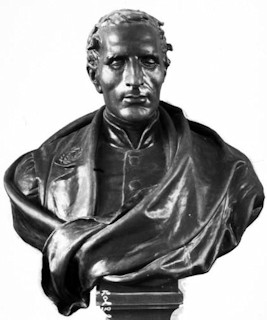 “Live without seeing, but be what you are.”

“Braille is knowledge, and knowledge is power.”

“We must be treated as equals – and communication is the way we can bring this about.”

A Short Biography of Louis Braille

Louis Braille was born in Coupvray, a small town near Paris, France, in 1809. He was the youngest of four children born to Simon-René Braille and his wife Monique.

Louis’ father was a saddle maker, working in a family business that had spanned generations. Louis loved to play in his father’s workshop, but had a tragic accident at the age of three when a sharp tool used to pierce leather punctured his eye. With no antibiotics at the time, infection set in, and soon his other eye was also infected. By the age of five, Louis had lost his sight in both eyes.

At the time, blind people had very few prospects, but Louis’ parents were determined to give him the same opportunities as other children. They sent him to the local village school where he learnt through listening. He developed a very good memory!

At the age of ten, Louis won a scholarship to one of the world’s first schools for blind children – the National Institute of Blind Youth in Paris. He was taught to read using a system of raised letters and also learnt to play the piano, organ and cello.

When Louis was 13, a retired French army captain, Charles Barbier, visited the students. Barbier had introduced a type of code for soldiers on the battlefield to communicate in the darkness of night, and thought his system might be useful for the blind. His system, which he called ‘sonography’, used raised 12-dot combinations to represent sounds, but the soldiers found it difficult to learn. Inspired by this story, Louis set out to simplify the code. He felt sure he could improve on the system of embossed letters he was currently using to read and write, which was slow and cumbersome.

After two years of hard work using a stylus to punch holes into paper, Louis developed a much simpler code based on letters rather than sounds, and using just six dots. He asked his headmaster to read a newspaper article aloud, and Louis recorded the piece word-for-word, reciting it back to prove that his system worked. Louis was just 15 at the time.

In 1829, aged 20, Louis published his first book about the system, ‘Method of Writing Words’, which outlined how the blind could read with their fingertips. The system was popular with fellow students and was even demonstrated to King Louis-Philippe I of France. It was difficult, however, to get approval from teachers and board members at the school, perhaps because they feared the system might replace their teaching positions.

Louis began teaching at the Royal Institute of Blind Youth in his early twenties and also became the organist at a local church. Although the Institute published their first book in braille in 1837, Louis’ system didn’t spread beyond the school itself.

Louis died from tuberculosis in 1852, at the age of 43. Two years later, because of overwhelming demand from students, braille was adopted formally by the Institute. In 1878, the World Congress for the Blind voted to make it an international system of writing for the blind. It was some time, however, before US schools for the blind adopted braille (1916) and before it became a universal code for English-speaking countries (1932).

Today, braille can be used for writing text, music and even technical maths and science equations. A condensed version is also used for books, newspapers and magazines to shorten the length of the material. Special computer keyboards and screens can also accommodate braille, and translators can be used to generate and print documents. Braille also features on some board games and playing cards – there’s no limit to what a blind person can do!

Next time you’re in a public place have a look for some braille symbols – on lift buttons, public telephones, signposts, and even some restaurant menus. It will make you realise just how much this man has improved the quality of life of over 150 million people who continue to use braille around the world today. 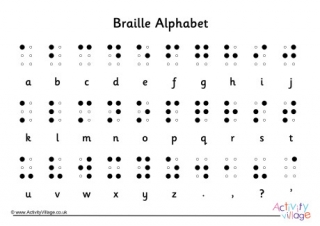 Here's our printable version of the Braille alphabet. Use it to help you with our Braille worksheets, or try and write your own words and sentences. 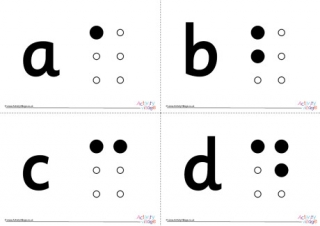 We've got the whole alphabet written in Braille in this printable pack, with one letter to each A4 page. Perfect if you're teaching the kids all about Braille and for classroom displays! 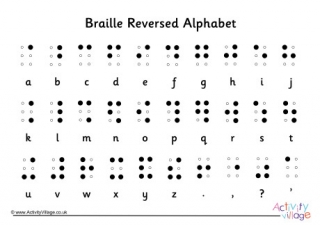 Print out this Braille Reversed Alphabet for Braille activities and learning in the classroom. Because the alphabet is reversed, you can use it to create raised dots that will then be in the correct position on a piece of paper or card placed underneath. 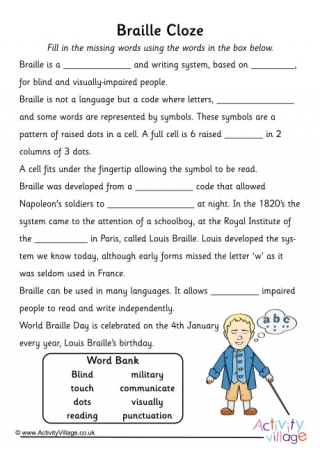 How much have you learned about Braille? Read the text then fill in the blanks using the word bank on this cloze worksheet. 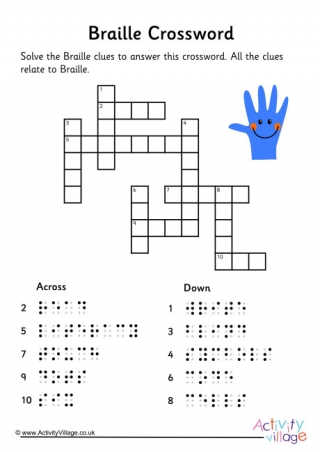 Here's a crossword with a twist. Can the kids solve the Braille clues then try to complete the crossword? 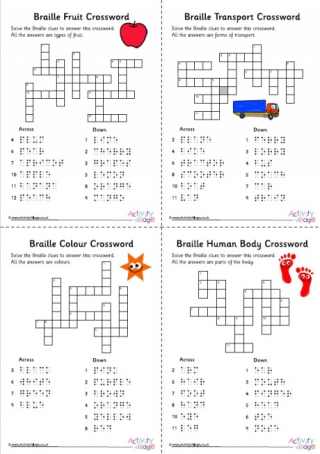 We've got 4 fun crosswords for the kids to try and solve based on simple themes like fruit and colours - but the clues are all given in Braille! Our printable Braille alphabet can be found here if they need some help. 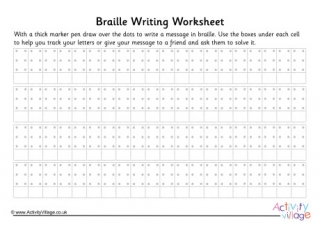 We've created a Braille Writing Worksheet that helps the kids write a message in Braille using guidelines for each letter, and there's space underneath each cell to track the letters they've written already. The children can have lots of fun sending messages to their friends! 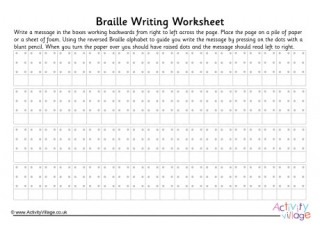 This Braille writing worksheet helps the children create their own Braille message that reads from left to right, and that can be read by reading the raised bumps that they create on the paper. 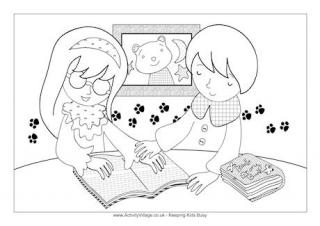 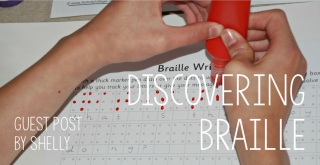 Did you know that there are lots of Braille resources available on Activity Village? Shelly and her kids try some of them out in this guest post. 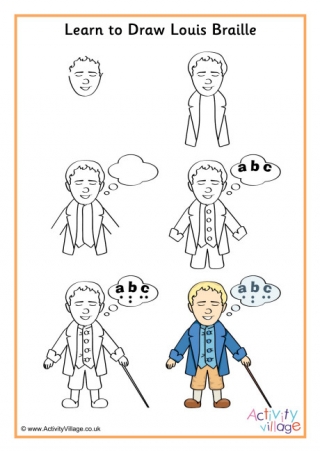 Have a go at drawing your own picture of Louis Braille with this fun step by step tutorial. 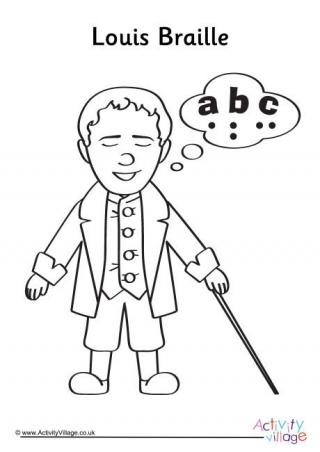 Here's a simple colouring page of Louis Braille to print for younger children to colour in. 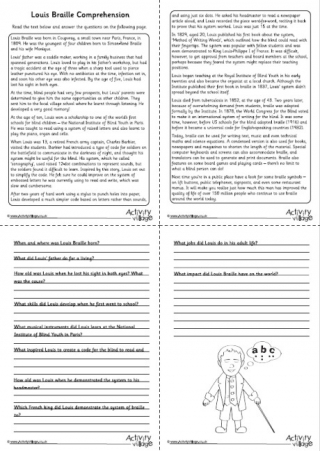 Read the text about Louis Braille carefully then answer the questions at the end of this comprehension worksheet. 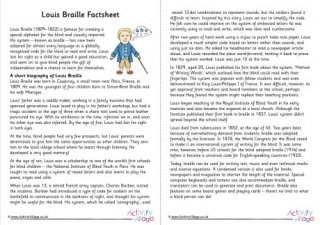 Did you know that Louis Braille published his first book at the age of 20? Learn more facts about him by reading our short factsheet. 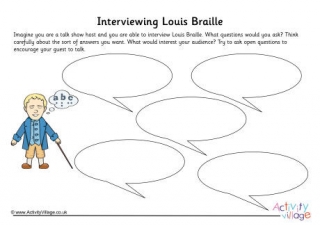 What questions do you think the world would want to ask Louis Braille? Put yourself in the position of an interviewer, and pose them to him... 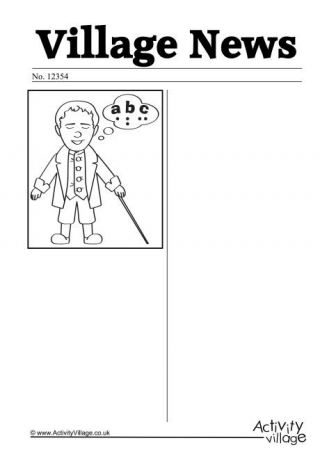 Louis Braille creates an alphabet that allows blind people to read easily! That could be the headline on this Village News worksheet ... although in fact the braille language wasn't really adopted until after Louis Braille's death. 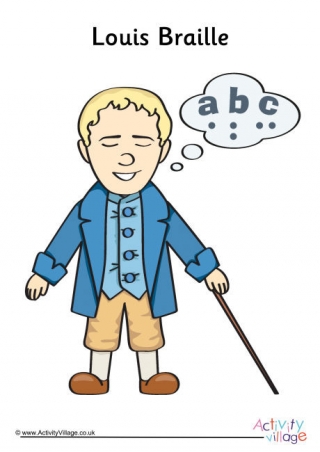 Print a simple illustrated poster of Louis Braille - perfect for display when you are learning about his achievements, or perhaps as a front cover for a project. 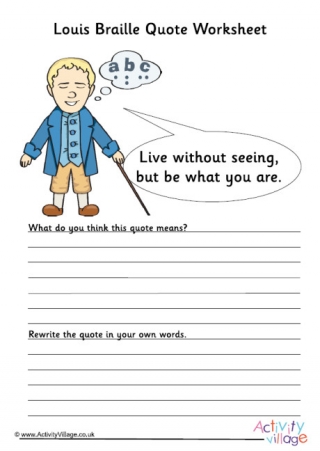 "Live without seeing but be what you are." Answer the questions on this simple worksheet based on the famous quote by Louis Braille. 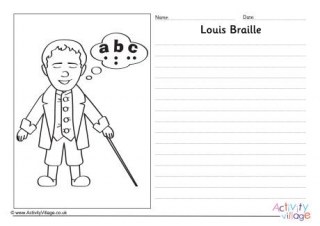 Use our Louis Braille story paper to write down what you have learned about this clever man, who achieved so much and made the world a better place for blind people ever after. 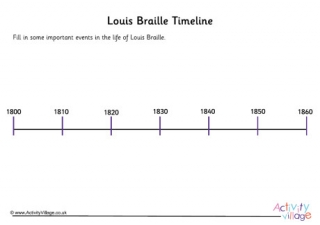 Timeline worksheets are great for helping kids understand chronological events. This one is for the life of Louis Braille. 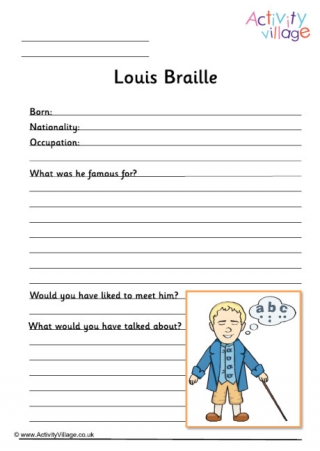 Can the kids find out some simple facts about Louis Braille and record them on this worksheet? Choose our black and white version if the kids would like to colour in the picture... 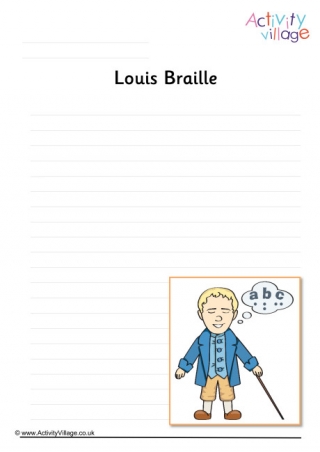 This useful writing page has just enough space to be used to record what you have learned about Louis Braille. It comes in colour or black and white. 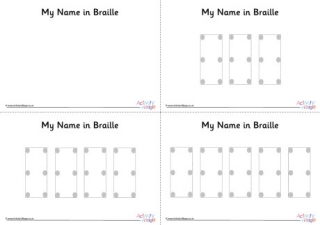 Here's an interesting challenge - can the children write their name in Braille? We've provided 6 guided pages so the kids can practise where to put the dots, then they can try on the blank page when they're ready. 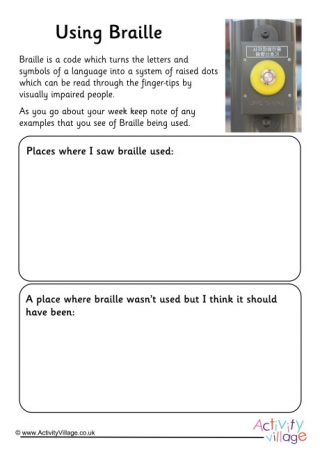 We might always notice, but Braille is used in lots of places that we visit. This activity asks the kids to keep a note of places where they see Brailled used, and to think of places where it wasn't used but perhaps should be. 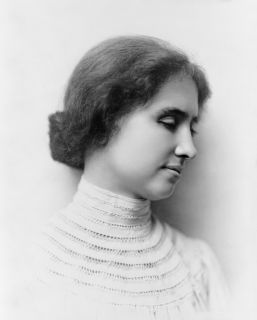