Louisa May Alcott (1832–1888) was an American author and poet, most famous for her novel ‘Little Women’. During her lifetime, she published more than 30 books, many of which were based on her own life story. Louisa’s family were also passionate about women’s rights, and Louisa was an active campaigner for women’s suffrage (the right to vote). Learn more about this popular writer and use our printable resources below to test your findings. 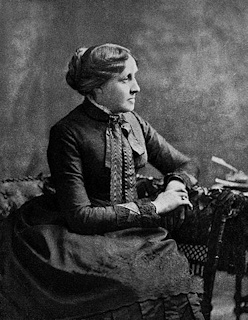 “Some books are so familiar that reading them is like being home again.”

“The power of finding beauty in the humblest things makes home happy and life lovely.”

“I'm not afraid of storms, for I'm learning how to sail my ship.”

A Short Biography of Louisa May Alcott

Louisa May Alcott was born in Germantown, Pennsylvania, USA, in 1832. She was the second of four daughters. Her father, Amos Bronson Alcott, worked in education, while her mother Abigail was a social worker.

The Alcotts were very poor. Instead of going to school, the girls were educated at home by their father, who had strict rules. But despite their circumstances, the family mixed with some of the most influential people of the time. Amos believed in women’s rights and was also against the practice of slavery. Among his friends were the writers Henry David Thoreau, Ralph Waldo Emerson, Nathaniel Hawthorne and Margaret Fuller. Louisa and her sisters became friends with these people too, and many of them passed on their wisdom to the girls.

In her teens, Louisa worked to earn money for the family – as a servant, a seamstress and a governess. Then, at 16, she wrote her first book – Flower Fables – a selection of fairy stories written for the daughter of Ralph Waldo Emerson. Although it wasn’t published for six years, by 1860 many of Louisa’s stories and poems were being published in a magazine called Atlantic Monthly.

During the American Civil War (1861–1865), Louisa helped to sew army uniforms and then found nursing work at a hospital in Washington DC. But her stay was short-lived. After six weeks, she caught typhoid fever and pneumonia and was confined to bed. Her journal entries and the letters she sent home during this time inspired the book ‘Hospital Sketches’ (1863) – the success of which inspired her to become a full-time writer.

In 1867, Louisa took a job as the editor of the teenage magazine ‘Merry’s Museum’. The following year, an editor at the publishing house – Thomas Niles – asked if she could write a novel for girls. Louisa had been a tomboy as a child and wasn’t sure she’d be up for the job, but the resulting book, ‘Little Women’ (1868), was a great success. Louisa loosely based the book on her childhood growing up with her three sisters, and the ‘March sisters’ bear some resemblance to herself (Jo) and her siblings Anna (Meg), Elizabeth (Beth) and Abigail (Amy). Like Beth in the book, Louisa’s own sister Elizabeth tragically died after contracting scarlet fever from a poor family she was helping, when she was just 22.

The success of ‘Little Women’ and the follow-up ‘Good Wives’ (1869) gave Louisa the financial independence she needed to care for her family and continue with her writing. She also published the sequels ‘Little Men’ (1871) and ‘Jo’s Boys’ (1886).

In the 1870s, Louisa campaigned for women’s suffrage. When the state of Massachusetts allowed women to vote in local elections in 1879, Louisa became the first woman in Concord to register to vote.

In the last years of her life, Louisa produced a book almost every year. She died at her home in Boston in 1888 from a stroke, at the age of 55, just two days after the death of her father. Although Louisa didn’t have any children of her own, she cared for her niece ‘Lulu’ (who had been named Louisa in her honour) when her youngest sister Abigail died a month after having the child in 1879. Lulu was just eight when Louisa passed away.

Although Louisa’s stories were written 150 years ago, they remain popular to this day. Her writing was often an escape from her family’s difficulties and the emotions she managed to convey continue to strike a chord with modern readers.

Our Louisa May Alcott Resources 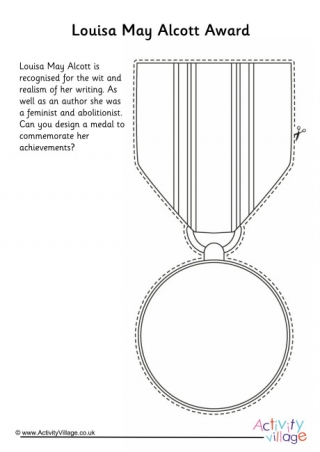 Louisa May Alcott is famous as an author, but she was also a feminist and abolitionist. This worksheet asks the children to design a medal to recognise her achievements. 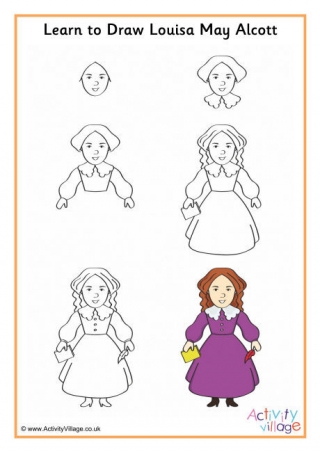 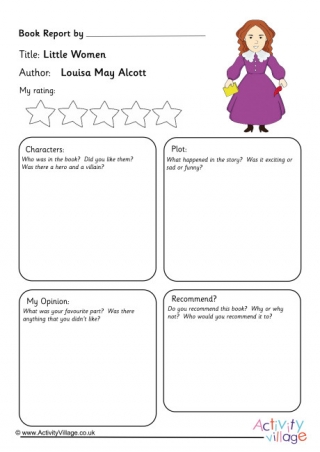 Writing book reports can be tricky, but our prompting Book Report printable will help encourage the kids to write their review of Little Women. 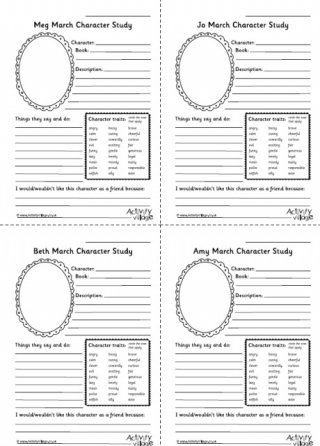 It's been a few years since I read Little Women but I still remember the strong characters well. 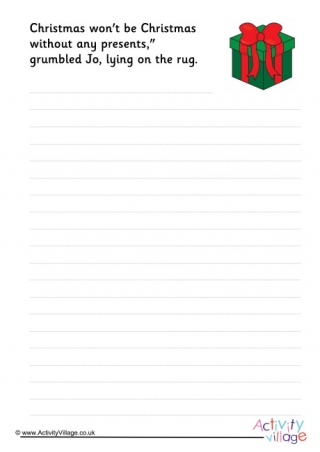 "Christmas won't be Christmas without any presents." Kids can have fun with this Little Women story starter, which borrows the opening lines from the famous novel. 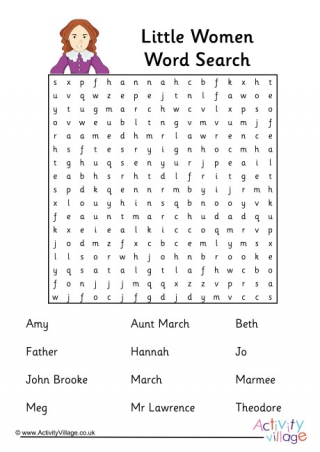 The names of the four sisters in Little Women are hidden in this wordsearch grid, along with other character names - can you find them all? 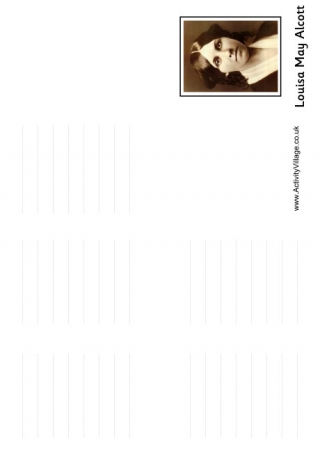 Print and fold this little booklet, ready to fill with the results of your research on Louisa May Alcott - find our origami booklet folding instructions here. 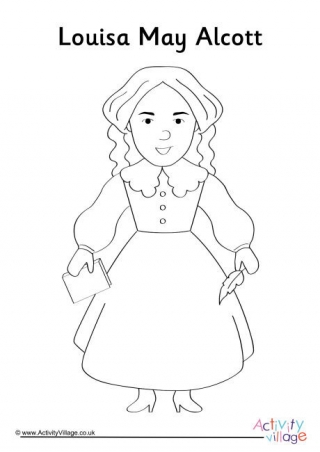 This simple colouring page is great for younger children studying the famous author Louisa May Alcott. 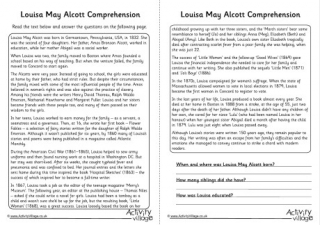 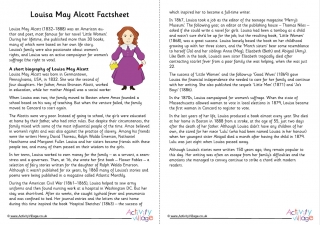 Learn a little about the life and work of author Louisa May Alcott with our two-page fact sheet. It's also great for sticking into folders or lapbooks. 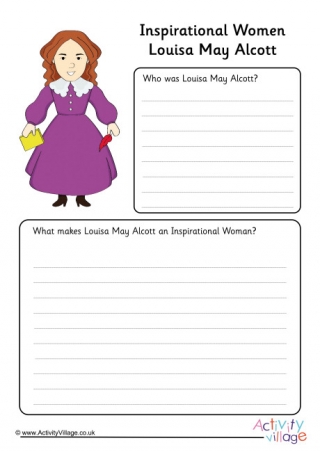 Use this fun worksheet to encourage the kids to do a little research on Louisa May Alcott and to write about why she was an inspirational woman. 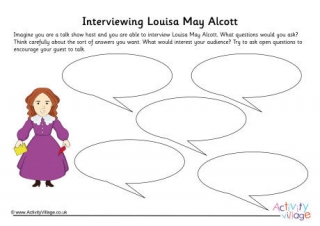 Ever wondered what it's like to be a famous author? Our fun worksheet asks the kids to imagine they can interview Louisa May Alcott for a talk show. 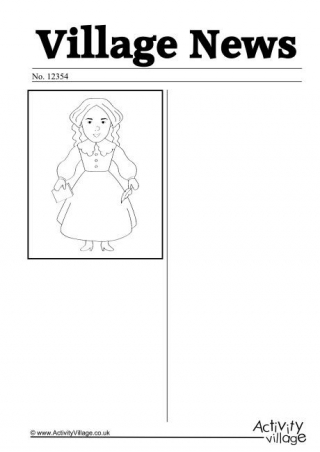 Our Louisa May Alcott newspaper writing prompt is perfect for encouraging the kids to do some writing about this famous author. 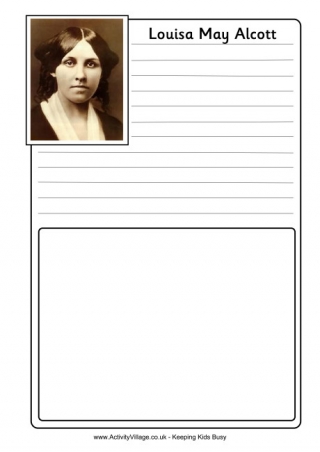 Louisa May Alcott, 1832-1888, is best known as the author of the very popular Little Women. Choose from two designs of our notebooking paper, the first of which also has space for a picture. 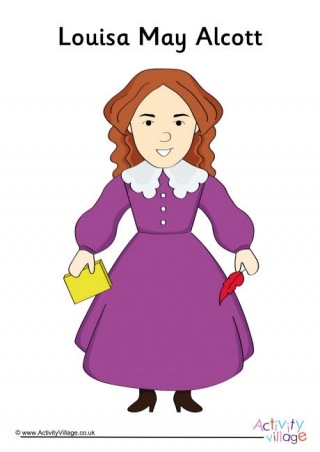 Here's a fun poster of Louisa May Alcott aimed at younger children, ready to print and display. 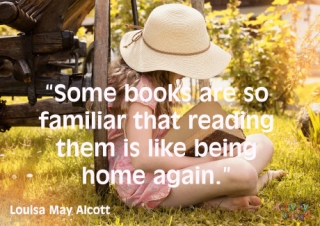 "Some books are so familiar that reading them is like being home again." This great quote by Louisa May Alcott is set against a lovely picture of a girl read outdoors, and would like perfect displayed in a reading corner or library. 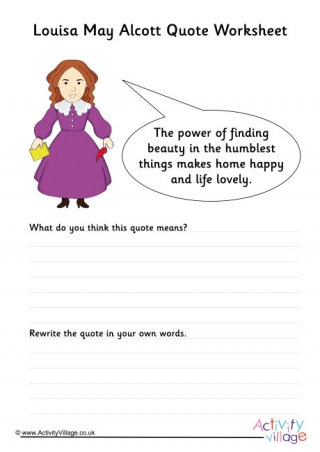 The kids will learn all about a famous quote by Louisa May Alcott with this fun worksheet. 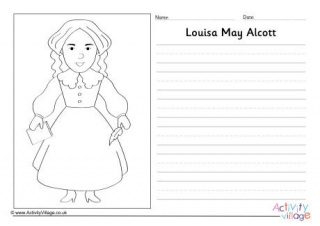 Children can use our Louisa May Alcott story paper to write a short biography, or maybe use it for some creative writing? We have two versions, lined and with handwriting lines. 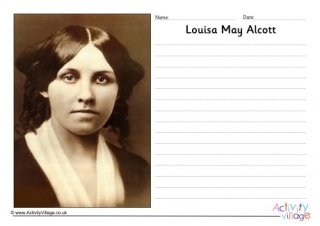 Use our Louisa May Alcott story paper to write about the famous author, or for some copywork from one of her books... 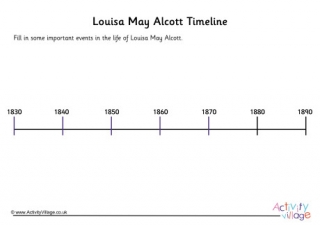 Print out our Louisa May Alcott timeline worksheet then ask the kids to mark down the important events in her life in the correct place. 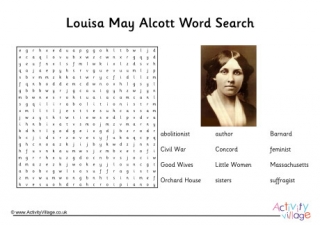 The name of Louisa May Alcott's most famous novel, Little Women, is hidden in this wordsearch grid along with 11 other words associated with the author. 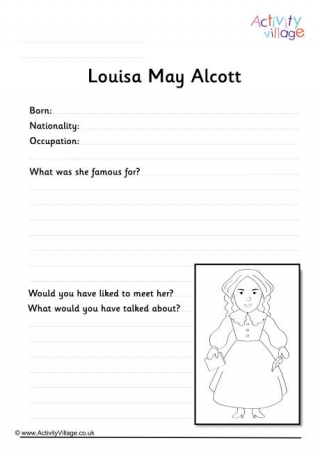 Encourage the children to find out a little about author Louisa May Alcott. Choose from a colour or black and white version of this fact-finding worksheet. Our writing pages are a fun way to start younger children researching and writing about famous people – in this case Louisa May Alcott, author of Little Women. 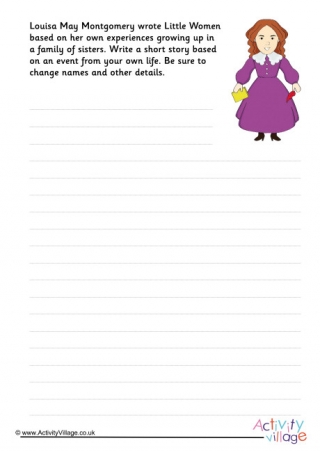 Louisa May Alcott wrote Little Women based on her own family life. This writing prompt asks the children to write their own short story based on an event from their own life.