Mae Jemison (1956–) is an American doctor, teacher, businesswoman and former astronaut who became the first black woman to travel in space, in 1992. Her achievements are all the more remarkable because Mae was living at a time when not many women (and very few black women) became scientists. Use our resources below to find out more about this determined lady, and how her achievements have brought inspiration to science students around the world. 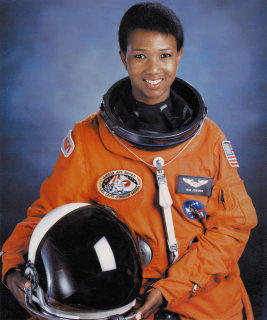 “My parents were the best scientists I knew, because they were always asking questions."

“Don’t let anyone rob you of your imagination, your creativity, or your curiosity. It’s your place in the world; it’s your life. Go on and do all you can with it, and make it the life you want to live.”

A Short Biography of Mae Jemison

Mae Jemison was born in 1956 in Decatur, Alabama, the youngest of three children. Her father Charlie was a roofer and carpenter, while her mother Dorothy was a schoolteacher.

When Mae was three, her family moved to Chicago, Illinois. Mae loved playing with her sister Ada and her brother Charles. She also enjoyed her studies and spent hours reading in the library, particularly science and astronomy. After Morgan Park High School, she won a scholarship to Stanford University at the age of 16, where she gained a degree in chemical engineering and African and Afro-American studies. But this wasn’t enough for Mae. She went on to study medicine at Cornell University for four years. During this time, she also studied in Cuba and Kenya, and volunteered at a Cambodian refugee camp in Thailand.

Mae gained her medical degree in 1981 and later worked as a GP. She also volunteered for over two years as a Peace Corps medical officer in Sierra Leone and Liberia, where, amongst her regular duties, she would teach and undertake medical research.

In 1985, Mae returned to the US and decided to follow her lifelong dream to become an astronaut. She applied for the NASA astronaut training program, and, from 2,000 applicants, was delighted to be one of 15 shortlisted candidates.

Mae became the first black woman to be admitted to NASA’s astronaut training program in 1987. After more than a year’s training in Texas, she began duties at the Kennedy Space Center, Florida. Then in September 1992, she joined six other astronauts on mission STS47, aboard the space shuttle Endeavour. The crew spent eight days in space (more than 190 hours), and orbited the Earth 126 times. Mae was asked to carry out crew-related experiments on board. Amongst her assignments, she tested the crew for weightlessness and motion sickness, and also looked at how tadpoles develop in zero gravity.

Mae left NASA in 1993 and went on to teach at Dartmouth College, New Hampshire, for several years, as Professor of Environmental Studies. She has also founded a number of companies, including the Jemison Group, which seeks to research, develop and market advanced technologies worldwide. Mae has worked hard to inspire the next generation of scientists. She established ‘The Earth We Share’, for example, an international science camp where high school students hone their problem-solving skills on various global issues.

In 2001, Mae published her autobiography, Find Where the Wind Goes: Moments from My Life, and has written other science publications. She is a popular public speaker and has received numerous awards and honorary degrees in recognition of her achievements. 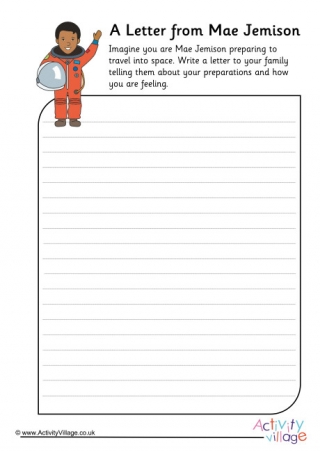 Here's a space-themed worksheet with a difference for the kids to enjoy. Can the children imagine that they are Mae Jemison preparing to go into space, and write a letter to their family explaining how they feel and what they are doing to prepare? 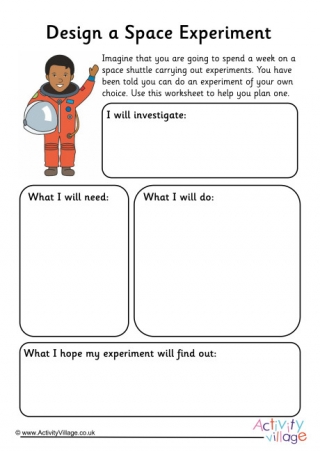 Get the kids thinking about science and space with this fun worksheet! Can they plan their own experiment to carry out on a space shuttle using the worksheet prompts to help them? 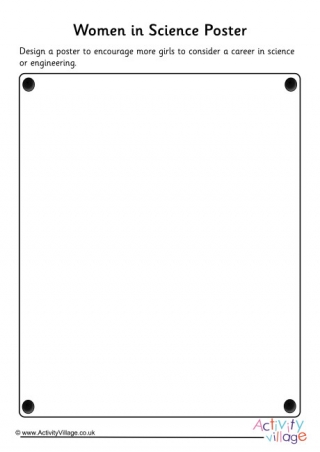 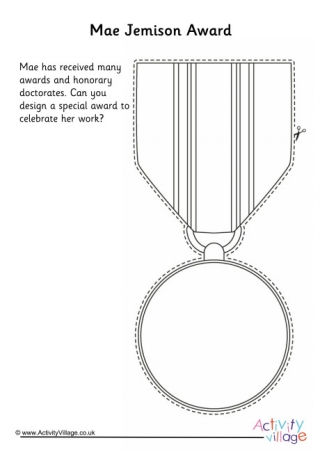 Mae Jemison has received several awards and honorary doctorates for her accomplishments, but can the children design their own award for her? 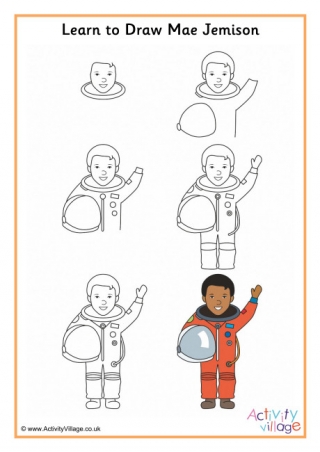 Have some fun learning to draw astronaut Mae Jemison wearing her NASA spacesuit... 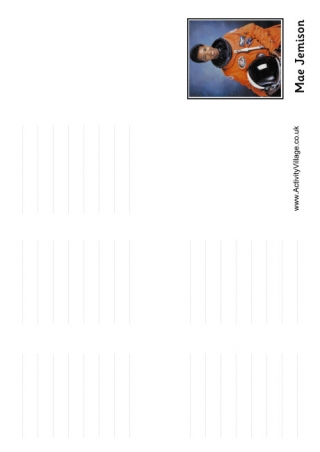 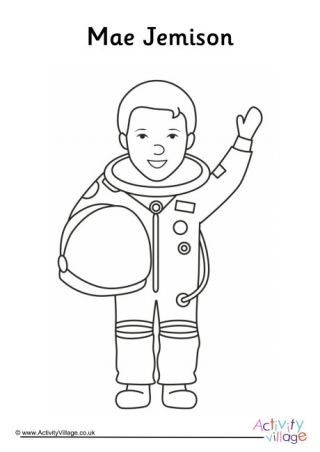 Have fun colouring in this picture of astronaut Mae Jemison. Do the kids know which colour her NASA spacesuit should be? 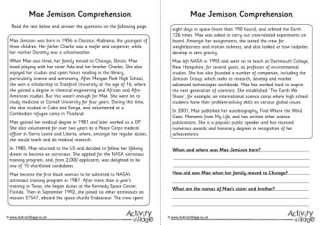 Our comprehension worksheets are a great way to improve comprehension skills in children whilst they learn a little bit about famous people too! This interesting worksheet is all about Mae Jemison, the first African-American woman to be admitted into the NASA astronaut training program. 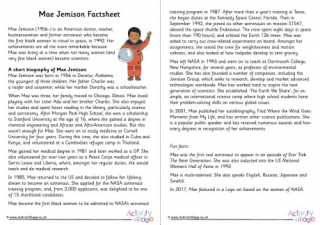 Our factsheets are a fun way to learn a little information about famous people and are great to read on their own or alongside some of our famous people activities. This factsheet is all about American astronaut Mae Jemison... 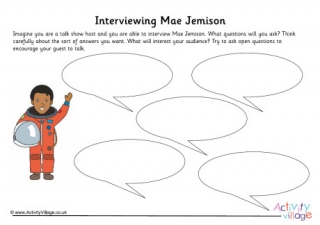 We're sure the kids can think of lots of questions they would like to ask astronaut Mae Jemison! They just need to imagine they are a talk show host interviewing this incredible lady and write their questions down in the speech bubbles... 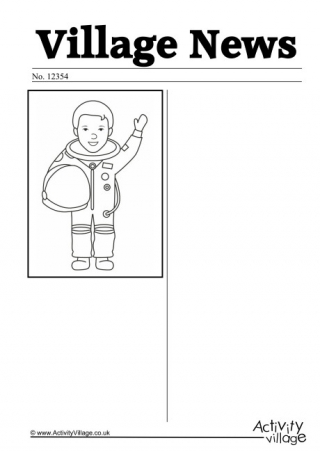 Ask the children to describe Mae Jemison's life and accomplishments using this newspaper writing prompt, then colour in the picture of her too... 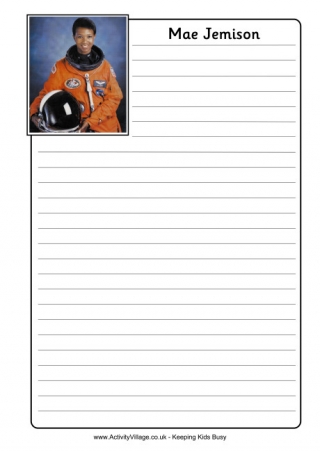 Record your work on astronaut Mae Jemison on one of our fun notebooking pages. 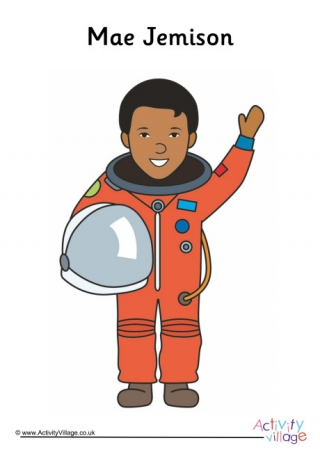 Here's a fun poster featuring an illustration of American astronaut Mae Jemison to print and display at home or in the classroom. 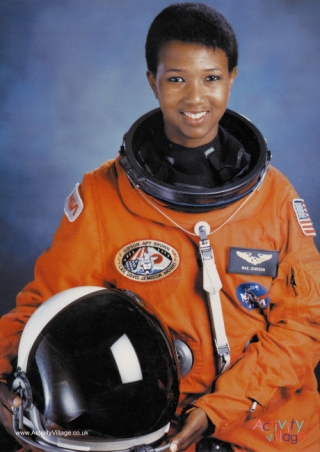 Here's a poster featuring a photo of Mae Jemison, the first African-American woman to be admitted into the NASA astronaut training program. 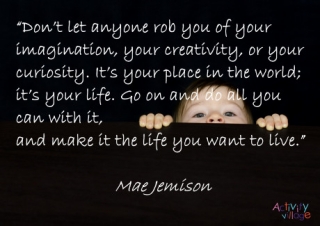 This poster features a truly inspirational quote from American astronaut Mae Jemison. Print using the borderless settings on your printer for the best results... 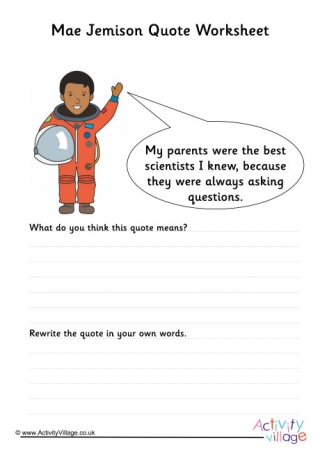 "My parents were the best scientists I knew, because they were always asking questions." This worksheet asks the children to consider this Mae Jemison quote and think about what she meant by it. 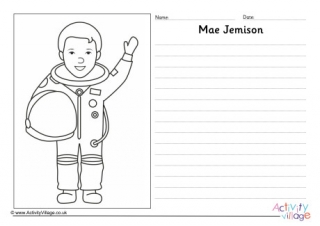 Write a creative story based on Mae Jemison's adventures as an astronaut, or record some facts or information about her on this story paper. 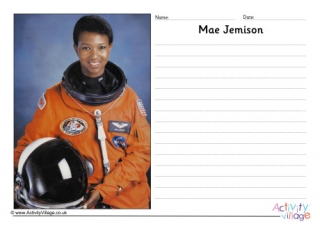 Mae Jemison was the first African-American woman to become an astronaut and to go into space. Write down some facts or research about her on this story paper... 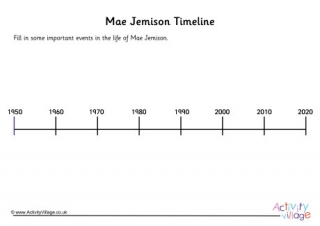 Mae Jemison became the first African-American woman to be admitted into the NASA astronaut training program - can you add this important date to her timeline, along with some important dates in her life? 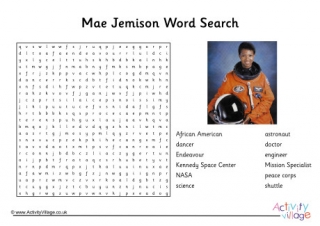 There are 12 hidden words and phrases in this Mae Jemison word search. Some of them are quite tricky, but if you get stuck we've included a separate solution too. 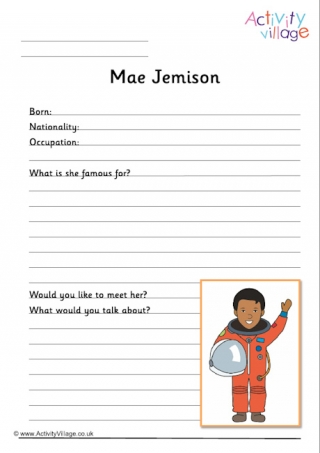 One of our fun worksheets on Famous Astronauts, this one asks children to do some research on Mae Jemison and fill in the blanks! 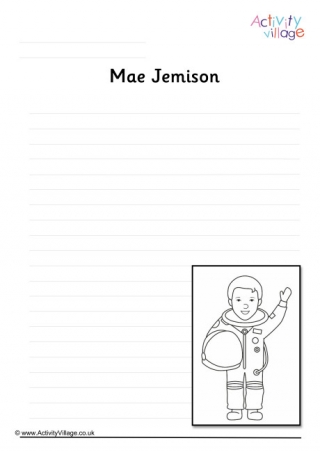 Our Mae Jemison writing page is useful for writing about this famous astronaut, or perhaps for collecting quotes or facts. 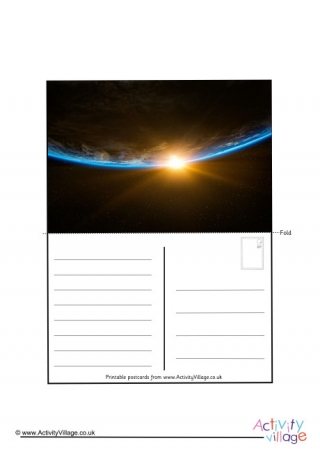 This space postcard really is stunning! Print using the borderless settings on your printer for the best results, then fold in half and glue together. Maybe the kids can pretend they're an astronaut sending this postcard home from space? 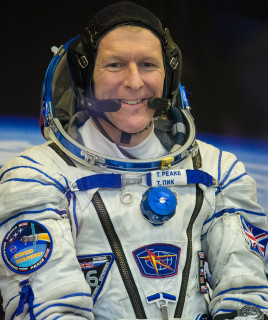