Mary Seacole (1805–1881) was a Jamaican-born British business woman who showed great kindness and bravery tending to sick and wounded soldiers during the Crimean War. As a dual heritage woman living in the Victorian Age, Mary was also a pioneer of her time. She ran her own businesses, loved to travel, and often risked her life for others. In 2004, she was voted the greatest black Briton in an online poll. Find out more about this extraordinary lady and use our collection of printable resources to test your newfound knowledge. Fun fact: In her will, Mary Seacole declared that her husband Edwin was the godson of Admiral Horatio Nelson. Others thought that Edwin was the illegitimate son of Nelson and Lady Hamilton, who was adopted into the Seacole family. Neither fact has ever been confirmed, but it may explain the meaning behind Edwin’s full name – Edwin Horatio Hamilton Seacole.

Another fun fact: Mary has often been compared to a famous nurse of the time, Florence Nightingale. While Florence was called ‘the lady with the lamp’, Mary was affectionately known as ‘the Creole with the tea mug’.

“… and the grateful words and smile which rewarded me for binding up a wound or giving a cooling drink was a pleasure worth risking life for at any time.”
Mary Seacole

A Short Biography of Mary Seacole

Mary was born in Kingston, Jamaica, in 1805 to a Jamaican nurse and a Scottish soldier. At the time, Jamaica was part of the British Empire. Mary was Creole (which means that she was dual heritage, with one European parent and one black Caribbean parent) and proud of her British and Jamaican roots.

Mary’s mother ran a boarding house for recovering soldiers. When Mary was 12, she began helping to nurse the sick. Mary learnt about herbal medicines from her mother and about medicines used by visiting doctors. She was very popular with the soldiers and made many friends.

In 1836, Mary married Edwin Seacole, an English naval officer. They ran a shop together but sadly Edwin was in poor health. He died in 1844, just eight years after their marriage. Mary’s mother also died that year.

Mary loved to travel. She visited other Caribbean islands and spent time living in Britain as a teenager. Her brother Edward had a hotel in Panama, and she opened a hotel there, too. Many miners were passing through Panama on their way to the California Gold Rush. They needed food and lodgings. When Panama was hit by a cholera epidemic, Mary risked her life to help the sick and dying.

When British soldiers left Jamaica to fight in the Crimean War (1853–1856), Mary wanted to help with the war effort, too. She travelled to Britain to sign up as a volunteer nurse, but was refused (perhaps because of her race, age or lack of hospital experience). But Mary was determined to go. She raised her own funds for the 4,000-mile journey and sailed to the Crimea in January 1855.

Together with her friend Thomas Day, she set up the British Hotel. Mary rented rooms to injured soldiers and ran a shop and restaurant offering good food, clean clothes, and warm blankets and boots. The money she raised was used to care for the sick and wounded. Mary also rode to the battlefields, taking mules laden with food and medicines. For her kindness, the soldiers called her ‘Mother Seacole’.

After the war, Mary closed the British Hotel and returned to Britain. She had used all her money to set up the business but couldn’t sell the supplies. Fortunately, many soldiers remembered her kindness. They wrote letters to newspapers praising Mary’s work. In 1857, a concert was held to raise money for her, attended by 80,000 people. Mary also wrote a book about her life called ‘Wonderful Adventures of Mrs Seacole in Many Lands’. It was one of the first travel books written by a black woman and became a bestseller.

Mary died in 1881. For about a century, she was almost forgotten. But then people began to read about this remarkable lady. In 1990, she was awarded the Jamaican Order of Merit, and in 2016, a memorial statue was unveiled in the garden of St Thomas’ Hospital, London. Despite the difficulties she faced, Mary’s courage and compassion touched many lives, and will now be remembered forever by future generations. This worksheet asks children to imagine they were a soldier who has been cared for by Mary Seacole and to write her a thank you letter - what will they say to her? Use our worksheet to compare and contrast the lives and work of Mary Seacole and Florence Nightingale. What were the similarities and differences between these two famous women? We've included two versions, blank and lined. Here's an interesting activity to get children thinking. Can they compare and contrast Florence Nightingale and Mary Seacole using the Venn diagram? What are the similarities and differences between the two? This is a challenging activity, great for older kids. Mary Seacole received many awards for her achievements. This fun printable lets the kids design their own special medal for her! The Victorian era was a big time for change and innovation, and there were many famous 'Great Victorians' who had an impact on peoples lives. This worksheet asks the kids to think and write about why Mary Seacole deserves the title of a 'Great Victorian'. Children can practise their people-drawing skills with this step by step lesson on how to draw Mary Seacole, a brave woman whose reputation rivalled that of Florence Nightingale! Our famous people booklets are a fun and different way for the kids to present their work. This booklet features a picture of Mary Seacole  - simply print out and fold. We have two versions available, lined and with blank pages. Here's a fun colouring page of Mary Seacole, the brave lady who fought prejudice so she could help British soldiers in the Crimean War. 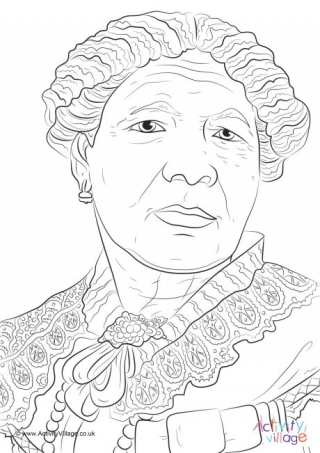 Here is a portrait-style colouring page of Mary Seacole, based on a well-known portrait photograph of her, for older children to colour. We've added a frame to this portrait colouring page of Mary Seacole, so that you can cut it out for your displays, or perhaps for the cover of your project notebook. Children can use our comprehension worksheet to learn about Mary Seacole, and then answer some questions at the end to help them retain what they have learned. Here, in printable form, is our "brief life" of Mary Seacole. Print this 2-page pdf file for your projects - or just to read later. Can the kids imagine they are a talk show host and interviewing Mary Seacole? What questions would they ask her about her life? This is a great worksheet to really get the kids thinking  - what sort of questions will produce interesting answers for their audience? Perhaps the children could use this newspaper writing prompt to write a report about Mary Seacole's adventures and work during the Crimean War, or to write about her interesting life story? This notebooking page has a photograph of Mary Seacole. The children can find out about her interesting life and record it on this handy page, and maybe draw a picture in the space provided. We also have a version with just lines too. 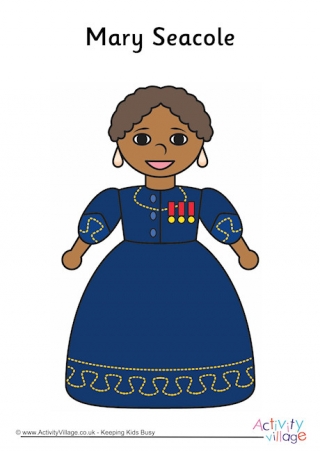 Here's a fun cartoon-style poster of Mary Seacole, the heroine who overcame prejudice and went to the Crimean War to help British soldiers. 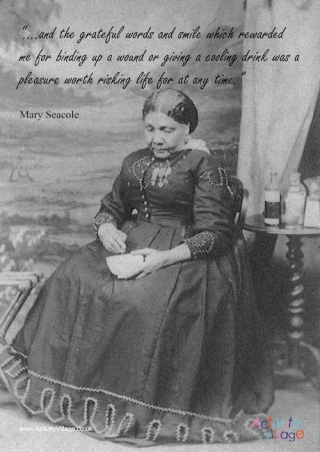 Print this stunning black and white poster of Mary Seacole featuring her quote "...and the grateful words and smile which rewarded me for binding up a wound or giving a cooling drink was a pleasure worth risking life for at any time." 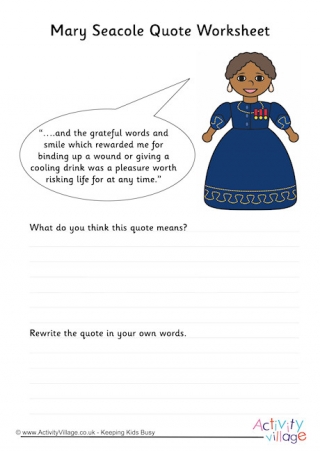 Mary Seacole once said, "....and the grateful words and smile which rewarded me for binding up a wound or giving a cooling drink was a pleasure worth risking life for at any time." Our simple worksheet asks the children to think about what this famous quote means and rewrite it in This story paper is perfect for writing about Mary Seacole. The kids can write about her interesting life, or perhaps write a creative story set in the Crimean War? Here's a printable timeline of Mary Seacole's life to use on its own, or the children can use it with our timeline worksheets. This version of our Mary Seacole timeline worksheet provides a timeline to print as well as key events to cut out and stick in the appropriate places. Print out this blank timeline worksheet then get the kids to fill in the important events in Mary Seacole's life. This simple worksheet, aimed at younger children, aims to help them record what they have learned about Mary Seacole. They can have fun thinking about what they would say to her if they met her! Choose from colour or black and white versions. Our Mary Seacole writing page is perfect for children to record their own research. Do they know what she did and why we remember her today? Available in colour or black and white.