We have colouring pages of the Tudor Rose, famous Tudors, and of significant events and places to enjoy. This colouring page depicts the meeting between Henry VIII of England and Francis I of France in 1520, at the Field of the Cloth of Gold. 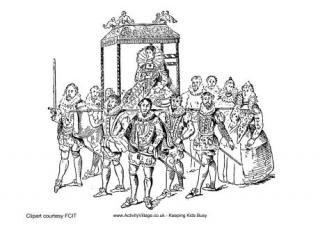 Here's a colouring page of Elizabeth I, grandly laid out on her litter being carried through the crowds! 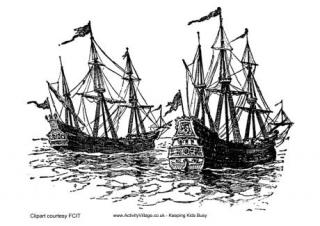 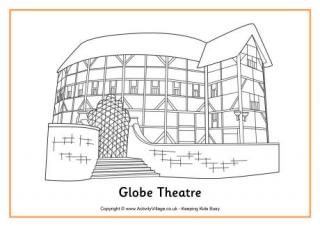 Here's a colouring page of Shakespeare's Globe Theatre to print and enjoy. It's not quite what we expect a theatre to look like today! Remember, as a Tudor building, much of the outside would be dark-stained beams and whitewash. Henry VIII lived at Hampton Court Palace for part of his time, and because it still exists it is probably the best known of his royal palaces. Here's a colouring page. Here's a colouring page of William Shakespeare's birth place, taken from an etching. Colour in this picture of a brave Tudor knight in full armour, ready for a joust! Here's a colouring page of the Tudor rose emblem - England's traditional floral heraldic emblem.You could do a Google image search to see how it should be coloured in. Here's a handsome portrait-style colouring page of William Shakespeare to print and colour in. He wears resplendent Tudor costume and ruff and sports a mustache. An etching of William Shakespeare, playwright and poet, to print and colour in. useful for projects and notebooking, perhaps.