Mother Teresa (1910–1997) was a Roman Catholic nun and missionary who dedicated herself to helping the poor, the sick and the disadvantaged. During her life, she became known around the world for her love, care and compassion. After her death, she was also recognised by the Roman Catholic Church as a saint. They called her Saint Teresa of Calcutta, in recognition of her time spent in India. Find out more about this inspirational lady and use our collection of printable resources below to reinforce what you have learnt. 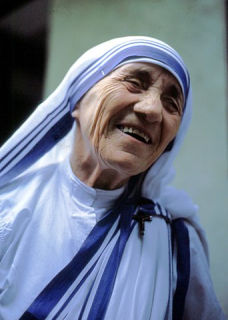 Fun facts: When Mother Teresa was teaching poor children in the city of Calcutta, she had no books or writing materials. Instead, she taught children to read and write by making marks in the dirt with wooden sticks! She also taught children how to care for themselves. Mother Teresa worked extremely hard, often sleeping just four hours a night, and waking at 4am to work and pray.

“Spread love everywhere you go. Let no one ever come to you without leaving happier.”
Mother Teresa

A Short Biography of Mother Teresa

Mother Teresa was born in 1910 in Skopje (now the capital of the Republic of Macedonia). Her birth name was Anjezë (Agnes) and she was the youngest of three children. Her parents were Albanian and deeply religious. They taught their children to always help those in need.

When Agnes was eight, her father died and she became very close to her mother. Agnes did well at school but by the age of 12, she knew she wanted to live a religious life. She left home at 18 to become a nun with the Sisters of Loreto. Agnes first went to Ireland to learn English, and then moved to India a year later. She never saw her mother or sister again.

When Agnes took her first vows, she chose the name ‘Sister Teresa’ after St Therese of Lisieux, the patron saint of missionaries. Another nun at the convent had chosen the name Theresa, so Agnes used the Spanish spelling ‘Teresa’. She then became ‘Mother Teresa’ when she took her final vows in 1937.

Mother Teresa believed that education was a way out of poverty. She taught geography at a local convent school in Calcutta, where she worked for 18 years, eventually becoming the headmistress. Although she enjoyed teaching, Mother Teresa was worried about the poor people of Calcutta. In 1946, she had a religious experience and said that Jesus had asked her to work in the city’s slums. Two years later, the local Archbishop and the Pope granted Mother Teresa permission to leave her convent. She began to wear a simple white and blue sari. She had no food or lodgings, but she begged for food and other supplies to help the poor. People began to donate to her cause.

In 1950, Mother Teresa founded a religious community of her own, called the Missionaries of Charity. Twelve of her former students and teachers volunteered to help her. They set up an open-air school, hospices, orphanages and a leper colony, as well as health clinics and homes for the disabled.

Mother Teresa’s work also took her overseas. She visited victims of the Armenian earthquake, helped the starving of Ethiopia and gave comfort to those affected by the Chernobyl disaster. In 1982, she put her own life at risk when she travelled to war-torn Beirut, calling for a temporary ceasefire between the Israelis and Palestinians to rescue 37 children trapped in a destroyed hospital there.

Mother Teresa worked almost up to her death, at the age of 87. By then, the Missionaries of Charity had become an international organisation with over 4,000 members working in 123 countries. She received many awards for her work, including the Nobel Peace Prize in 1979. Instead of going to the traditional Nobel honour banquet, Mother Teresa asked that the money for this event (US$192,000) be donated to the poor. Whatever the occasion, her only wish was to help those less fortunate than herself. 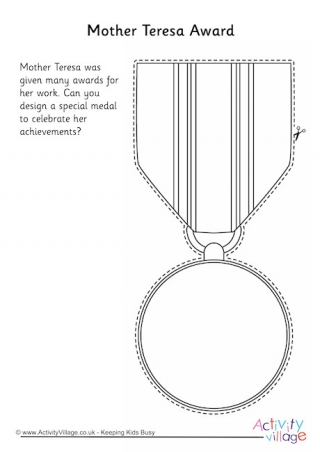 Mother Teresa received many awards during her incredible lifetime, including the Nobel peace prize. The children can design their own award for her achievements using this fun template. Children can follow along with our step by step instructions to draw their own picture of Mother Teresa, then colour it in. Print and fold this simple booklet (instructions here) and use it to store all the information the kids collect about Mother Teresa, or they can write down some of her famous quotes inside. We have two versions to choose from, blank and lined. 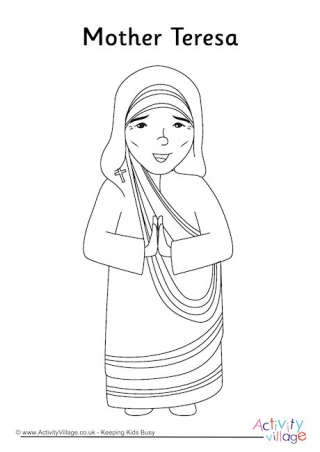 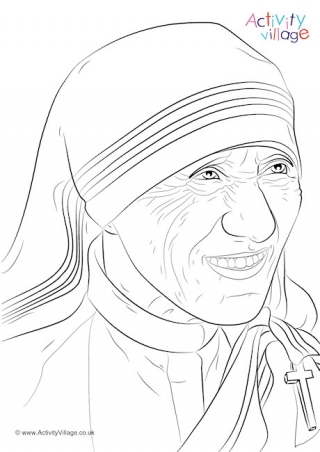 This is the second of our Mother Teresa colouring pages and features a more detailed drawing of this great lady, ideal for older kids. 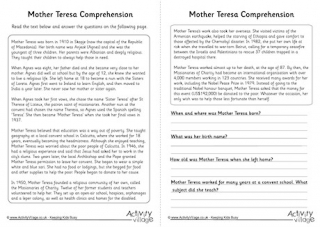 This two-page comprehension worksheet introduces children to the life and work of Mother Teresa, then asks them to answer questions about what they have just read. 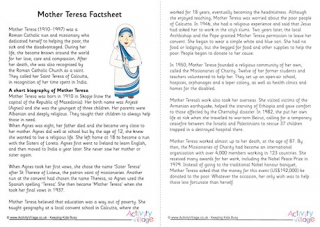 Here's an interesting worksheet for the kids to try. Imagine you are talk show host and you are interviewing Mother Teresa. What questions would you ask her? What would the audience want to find out about her life and work? Here's a fun way for the kids to round up their studies on Mother Teresa. Can they write a newspaper report on her incredible life and work? 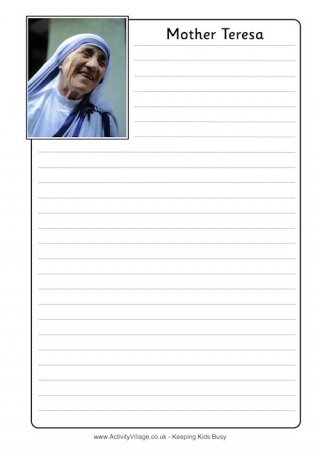 Our notebooking pages are great for older children to collect information, facts, and quotes about Mother Teresa. We have two sheets to print out, one with just lines, and one with space for a drawing or stuck-in printed picture. Here's a cartoon style poster of Mother Teresa that's easy to print and display in a classroom. 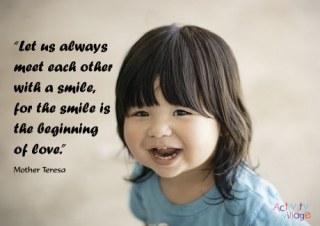 "Let us always meet each other with a smile, for the smile is the beginning of love." This is such a lovely quote from Mother Teresa, and the child on this quote poster certainly has a beautiful happy smile! Print off the poster to use as part of topic work and displays. "If you can't feed a hundred people, then feed just one." This beautiful poster features one of Mother Teresa's famous quotes and will look lovely as part of a classroom display. "The hunger for love is much more difficult to remove than the hunger for bread." This simple worksheet asks children to think about what Mother Teresa meant when she said this, and to rewrite it in their own words. 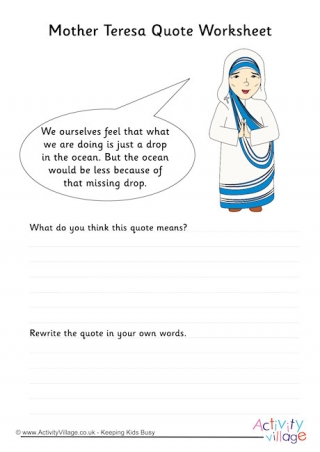 "We ourselves feel that what we are doing is just a drop in the ocean. Use our story paper to write about Mother Teresa - children can colour in the picture of her too! This version of our Mother Teresa timeline worksheet provides a timeline to print out as well as key events to cut out and stick in the appropriate places. Fill in some important events in the life of Mother Teresa on our blank timeline worksheet. Have some fun with this simple Mother Teresa worksheet (available in black and white or colour). The kids will need to find out some facts by doing a little research, and then think about what they would talk to Mother Teresa about if they were to meet. Our writing pages are a fun way to start younger children researching and writing about well-known people  - this writing page features the famous humanitarian Mother Teresa. We've got two versions to print out, colour or black and white.