Are you looking for Mothering Sunday activities for the children? You've come to the right place! Mothering Sunday next falls on 19th March 2023. It is a Christian church celebration honouring mothers and other carers. 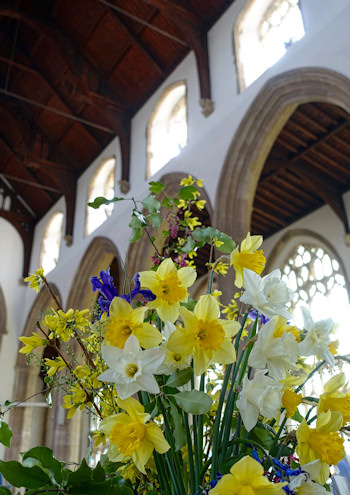 The Origins of Mothering Sunday?

Mothering Sunday is celebrated by Christians in some parts of Europe, falling on the fourth Sunday in Lent, three weeks before Easter Sunday.

In the 16th century, on that particular day people went "a-mothering" and returned to their "mother" church - which might have been their local parish church, the church where they were baptised, or the main church or cathedral in the area - for a special service. Domestic servants were given the day off and often met up with their families to visit church, so the day also became a celebration of family, and mothers in particular. People collected flowers along the way to give to the church and their mothers - evolving into the traditions of Mother's Day now. Lenten vows were relaxed on the day and sometimes special treats were eaten as well such as Simnel cake (also traditional at Easter) and "Mothering Buns", which were sweet buns covered in pink or white icing and possibly "hundreds and thousands". Because of this, Mothering Sunday was also sometimes known as Refreshment Sunday, Simnel Sunday and even Pudding Pie Sunday!

By the early 20th century, Mothering Sunday was less widely observed. In America, however, Anna Jarvis had campaigned for a day to honour mothers and in 1914 President Woodrow Wilson announced an annual Mother's Day on the second Sunday in May. Seeing newspaper reports of this new "Mother's Day", Constance Smith began a campaign for a similar celebration of mothers in this country in the form of a revival of Mothering Sunday. During the Second World War, when American and Canadian soldiers were stationed in the UK and brought the US traditions over, the idea grew in popularity and by the 1950s "Mother's Day" was a commerical holiday in the UK as well. 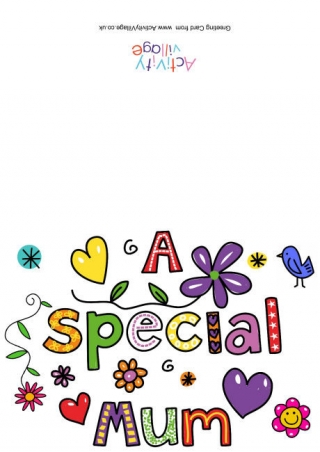 This gorgeous card is perfect to give to your Mum on Mother's Day or for her birthday - and we're sure she'll love the pretty design as much as we do! 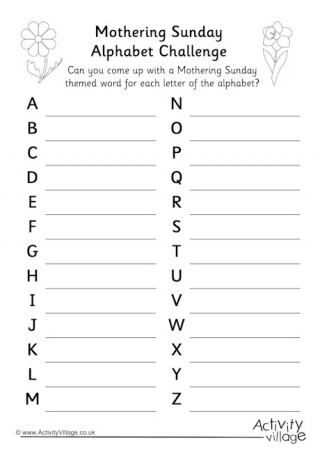 Here is a tricky challenge for children learning about Mothering Sunday - perhaps at Sunday School. Can they come up with a word for each letter of the alphabet, relating to Mothering Sunday and everything it represents? 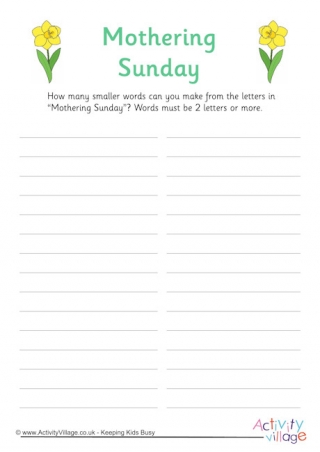 How many smaller words can the children make using the letters of the words "Mothering Sunday"? 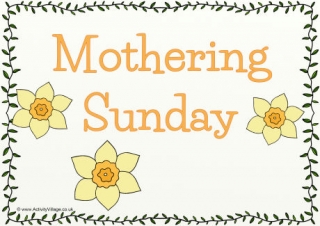 Here's a simple Mothering Sunday poster that you can print as a reminder or a decoration on the day. It is best printed using your printer's borderless settings.

We have many ideas for crafts, colouring pages, printable activities, puzzles and worksheets, all celebrating mothers and families in general. Find them by following the links below. 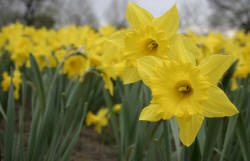