Mountain is a well-known dice game which is called by many names. Its simplicity makes it ideal for younger players, but with its variations it is popular with all ages. 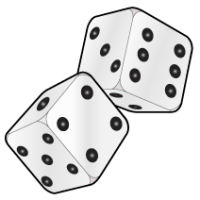 Equipment:
2-3 dice
Paper and pencil
Our printables below (optional)

The object of the game is to be the first to climb your mountain, in number order, and then descend the other side.

Give each player a print-out (or simply write the appropriate numbers yourself on a scrap of paper), a pencil and 2 dice. Allow the youngest player to start.

He rolls the dice and hopes for a 1, which will allow him to cross the number 1 off his mountain. He must ascend in numerical order, so cannot cross off the 2 until he has crossed off the 1. If he rolls a 1 and a 2, however, he can cross both numbers off in one turn. Play continues until someone has made it all the way up their mountain and down the other side in the correct order.

Introduce adding
For a quicker game, allow the players to add their dice together to produce another number. For example, a throw of 1 and 2 would allow that player to cross off the 1, the 2 and the 3, all in one turn.

Climb a higher mountain
If you decide to play by adding the dice together, it can be fun to increase the height of the mountain (try 9, 10 or 12) - but we suggest increasing the number of dice to 3.

Random order
The character of the game can be changed completely by allowing the players to cross off their numbers in random order. However, all the numbers on the ascent must still be crossed off before a player can begin to descend the mountain. Play this variation with 3 dice and the numbers to 12. Each die may only be used once (but does not have to be used) in each go. This introduces a strategic element to the game. Children will soon realise that it is better to cross off the higher numbers first.

Laminate the printables and use a washable pen. Pack a set in a ziploc bag for an easy portable game or time-filling activity in the classroom. 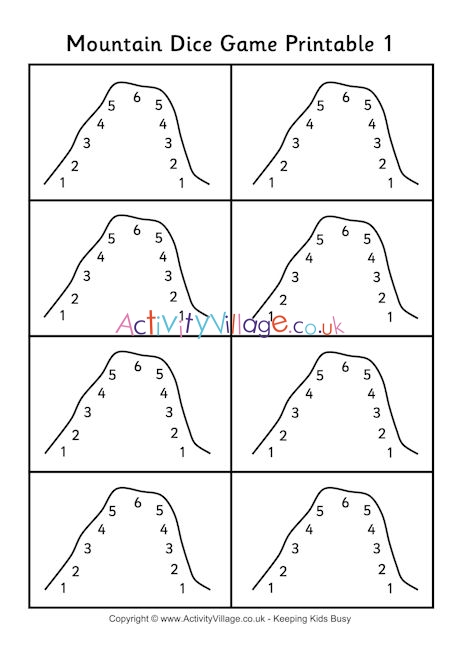 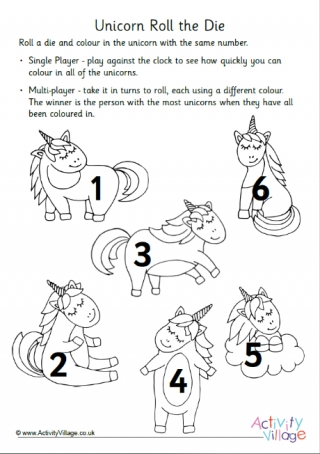 Unicorn fans will enjoy playing this game, which is designed to help children learn to match the dots on dice to the appropriate numberals - while having fun, of course! Play singly or in pairs. All you will need is this printable, a die and 1 or 2 coloured pencils. 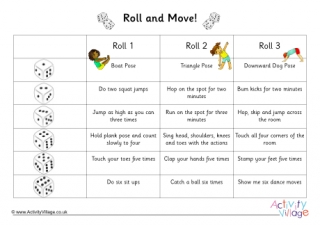 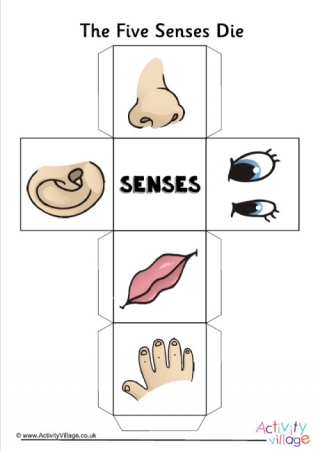