Follow our origami gift box instructions to make this lovely box in useful sizes - use it for storage or for giving presents at Christmas or any time of year! The boxes are fun to fold and they look great - you will find it hard to stop at just folding one!

Boxes made with 12" scrapbook paper are perfectly sized for a stack of cookies. 6" squares make gift boxes which will hold chocolate coins or other small treats, or are pretty tied with a ribbon and hung on the Christmas tree. 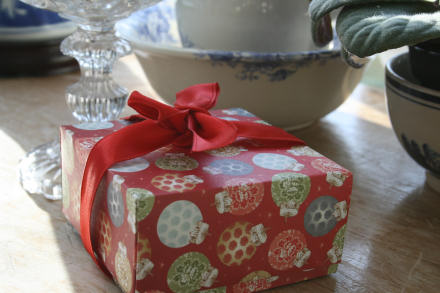 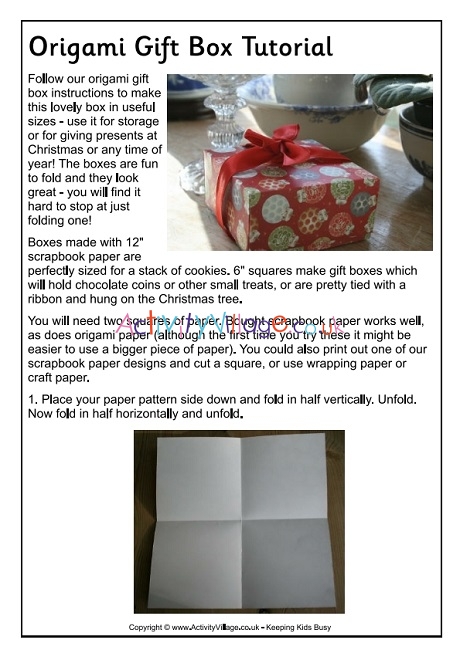 You will need two squares of paper. Bought scrapbook paper works well, as does origami paper (although the first time you try these it might be easier to use a bigger piece of paper). You could also print out one of our scrapbook paper designs and cut a square, or use wrapping paper or craft paper. 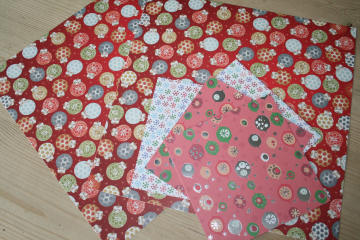 1. Place your paper pattern side down and fold in half vertically. Unfold. Now fold in half horizontally and unfold. 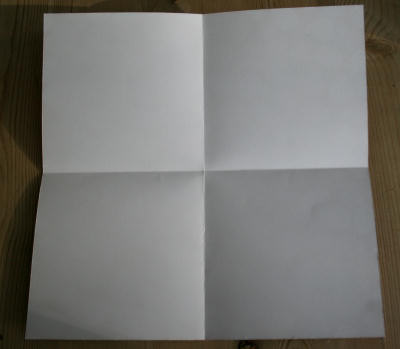 2. Fold each corner into the centre, creasing well. If you are using scrapbook paper you may want to use a creasing tool or the edge of a teaspoon to make the folds sharp. 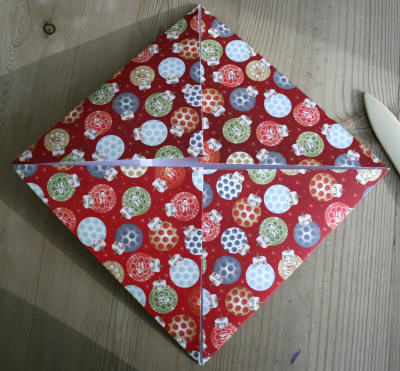 3. Now fold the bottom edge up to the centre as shown in the photo below: 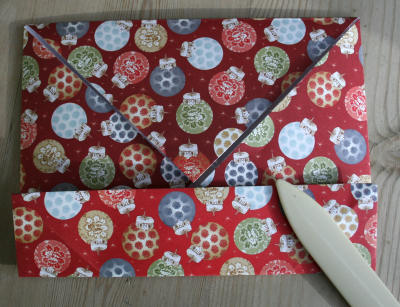 4. And fold the top edge down to the centre. 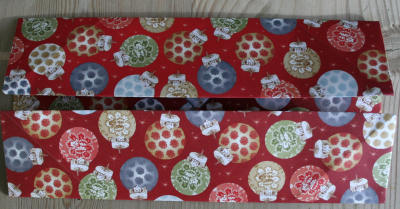 5. Now open nearly all the folds up again, until you just have two corners turned in as shown below. 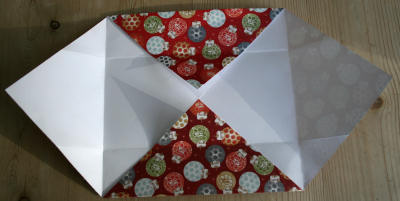 6. Fold the bottom edge up to meet the centre... 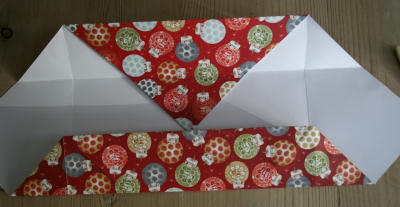 7...and fold the top edge down to the centre too, creasing both edges well.

8. Open the paper out again! 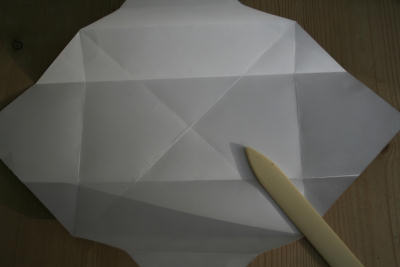 8. Fold the four corners back into the middle. 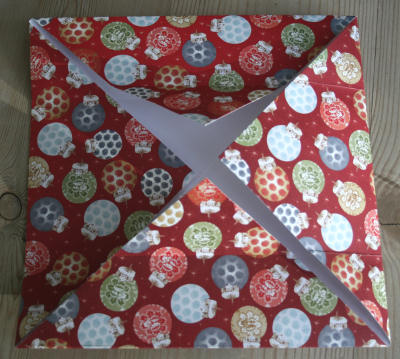 9. Now fold the left and right edges into the middle. 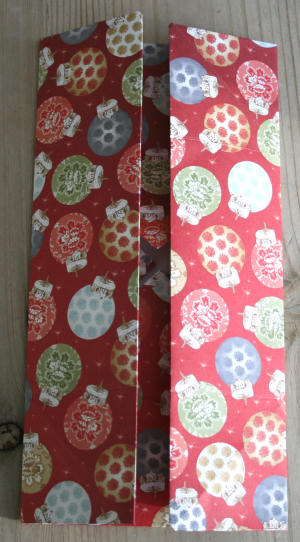 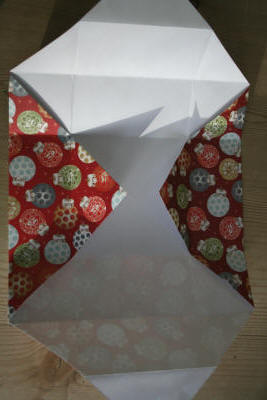 11. Fold the left and right edges into the centre and crease well.

12. Lift up the two flaps that you have just folded down, to form the sides of the box. Look for the centre square, and begin to fold the ends up and in. 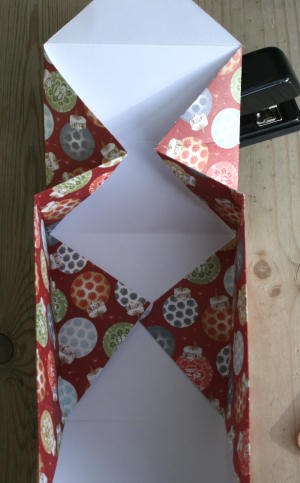 13. Tuck the top point over the side of the box and back down into the centre. It's hard to describe but you will find that the folds you have already made help the process. 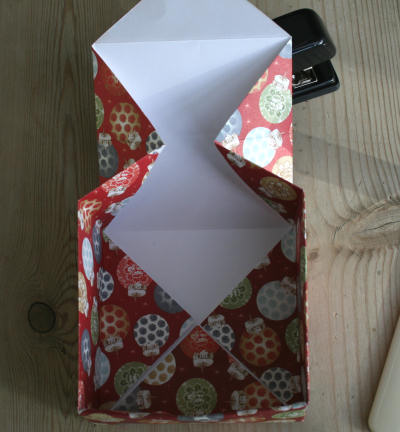 14. Do the same with the remaining point to form the fourth side of your box. You might want to put a little dab of glue stick in the very centre to keep the points down. 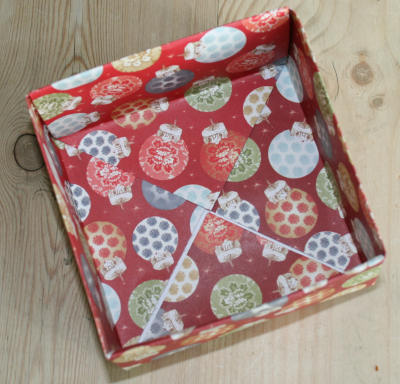 15. Now make the lid for your box. Follow the same steps again, but this time, when you fold the edges in to the centre in steps 3, 4 and 9, leave a small gap of about 1/4 inch rather than touching the centre point. See the photo below. 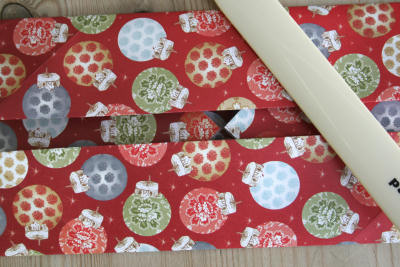 16. When you form the box lid, it will be slightly bigger than the box itself and will fit snugly over the top! 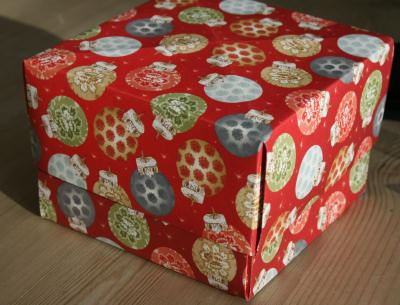 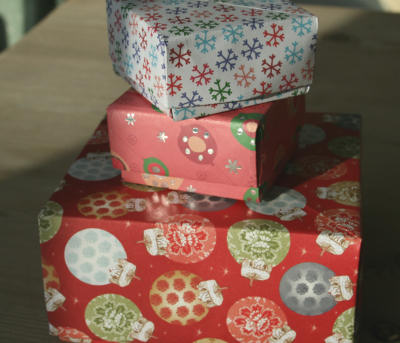 We made a stack of origami gift boxes! 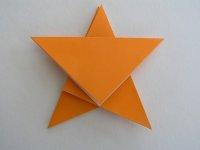 This is a very simple origami star which even the youngest children can make. As you will need three squares of paper and  a glue stick to complete the model, it isn't origami in the true sense! 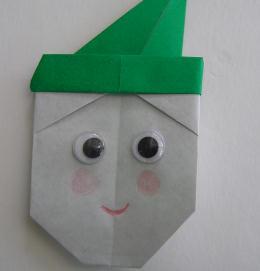 This funny little elf could be busy at Christmas helping Santa Claus, or causing trouble for St Patricks Day! 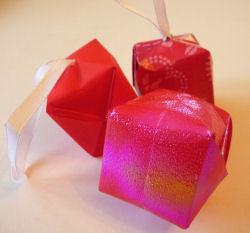 These origami Christmas Tree baubles are based on the traditional origami water bomb model. You can make them in all sizes using origami paper, gift wrap cut into squares, scrapbooking paper or any special, glittery paper you can find.