These simple puzzles (really worksheets in disguise!) encourage children to choose the right path by adding, subtracting, multiplying or dividing a series of numbers to find the correct total. Use ours or print out the blanks and create your own worksheets for extra practice, adapting to suit the age of your children. 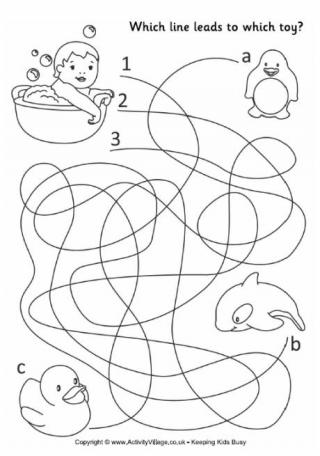 The baby has been throwing his bath toys out of the bath! Ask the children to guess which line leads to which toy - then trace the lines with their finger or a pencil to find out if they were right! 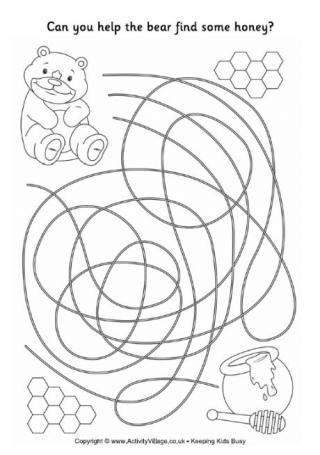 Bears love honey, and this gorgeous bear needs some help finding his way to the honey pot! Get the children to guess which line leads to the honey and then trace with their fingers or a pencil to see if they were right. 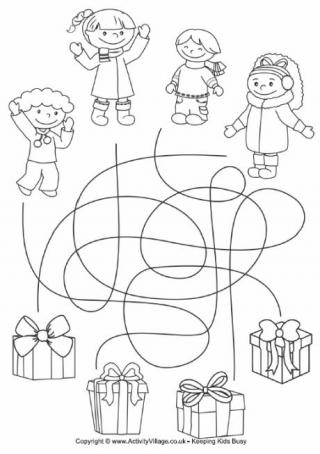 Which present belongs to which child? Children can trace with their fingers along the lines to find out - or use a pencil or crayon. Good practice for early writing. In what order should you be placing the ornaments on the Christmas tree? Kids can have a guess first, then trace the lines with their fingers or a pencil to see if they were right. 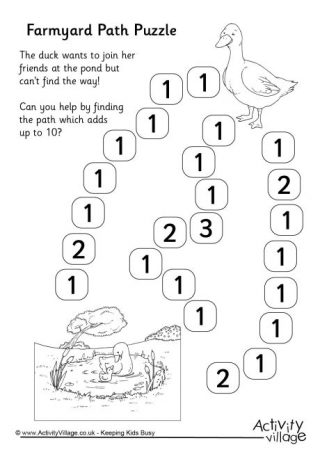 Our farmyard path puzzle is a fun way to practice early maths skills.  We have 3 versions of this simple addition puzzle for you; addition to 10, addition to 15 and a blank version to add your own numbers. 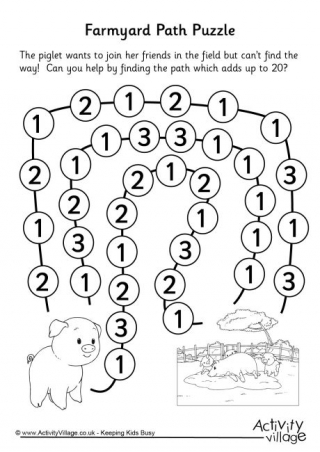 The second of our farmyard path puzzles tests addition to 15 or addition to 20.  There is also a blank version for you to add your own numbers. 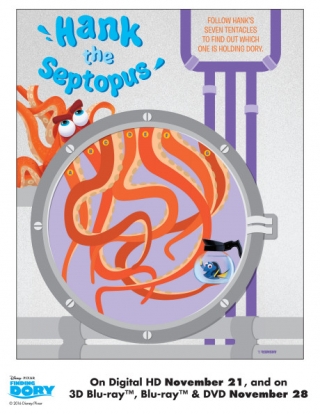 Follow Hank's seven tentacles to find out which one is holding Dory! 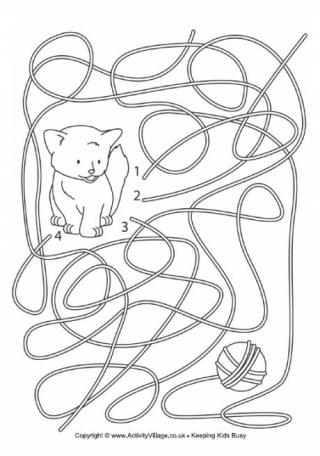 Here's a lovely puzzle for younger kids. Ask the kids to guess which line comes from the ball of wool, then check if they are correct by tracing each line with their finger or a pen...

Trace along the lines of these New Year balloons to see which one belongs to which year! While tracing the lines to find out which athlete won which medal, your children will be practising their pencil control and strenghtening their skills. 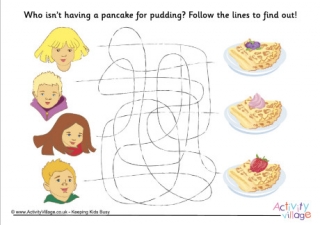 Trace along each "path" to work out which child isn't have a pancake for pudding this Pancake Day! A simple puzzle that will have children practicing adding up lots of small numbers - and having fun! Which path of numbers adds up to 10? 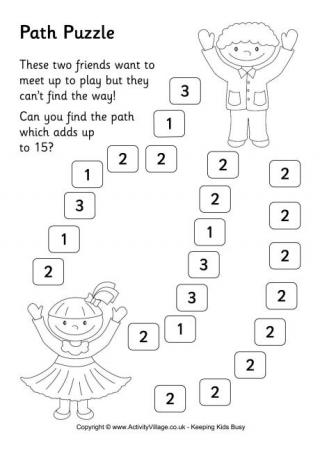 Which of the three paths adds up to 15? Some children will recognise very quickly that one of these paths can only end in an even number... Here's a blank version of our Path Puzzle 1 printable, which you can fill in over and over again with different puzzles for your children. Just specify what the goal is (eg which path adds up to 10, or 12, or 20...) and make sure that only one of them does! A slightly trickier path puzzle, with more steps to add up along the way! Follow the different paths and find the one that adds up to 15... Children need to follow all the steps along the path, adding as they go. Which path adds up to 20? That's the one that the kids in the picture need to take... I hope you find this blank path puzzle printable useful! There are lots of steps so you can make it very challenging for older children, by giving them higher numbers and aiming for a higher target. Which line will take the puppy to his ball, his bone and his supper! Encourage your child to guess before they start to trace the route... 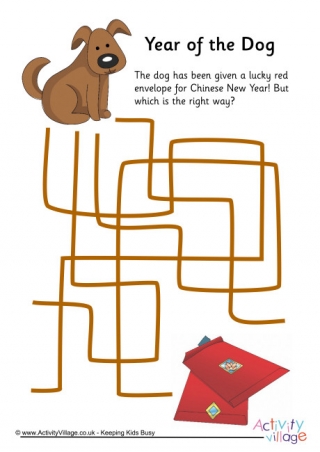 Follow the path on this fun Year of the Dog puzzle and help the dog reach the red lucky money envelope. Which track leads the goat to the lucky money envelopes? Here's a simple Chinese New Year puzzle in which children need to trace each path with their finger or a pencil to see which is the right one... Follow the path on this Year of the Horse puzzle and get the horse to the lucky money envelope! There are four different routes that the monkey could take to reach the Chinese New Year red envelopes. Can the kids trace each path to find the correct one? Red envelopes are traditionally given as a gift at Chinese New Year, but this pig needs some helping to find his. Which path is the right one? Can you work out which of the four paths will take the rooster to the money envelopes on this Year of the Rooster path puzzle?