When we think of football, we think of Pelé! This football legend played professionally in Brazil for 20 years (and later in New York), helped his country win three World Cups and is considered by many to be the greatest footballer of all time. Learn a little about his life and career and then enjoy our collection of colouring pages, worksheets and printables with the kids. 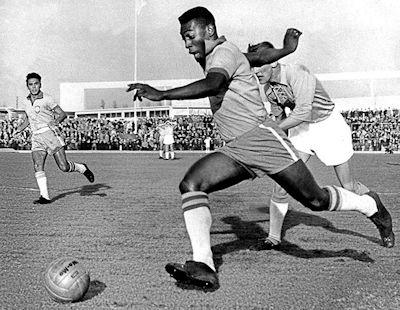 "Success is no accident. It is hard work, perseverance, learning, studying, sacrifice and most of all, love of what you are doing or learning to do."

A Short Biography of Pelé

Edison Arantes do Nascimento was born in 1940 in Três Corações, Brazil, moving as a young boy to Bauru. His father was a would-be, struggling soccer player, and Pelé grew up in poverty. He practised his soccer skills with friends, using a home-made football in the streets of the city. While a child he earned the nickname Pelé.

Aged 11 Pelé joined a youth squad coached by an ex-Brazil player. When he was 15 his coach took him to try out for Santos, a professional Brazilian football club, telling the club "This boy will be the greatest soccer player in the world". He was signed up immediately, and scored his first professional goal before he even turned 16 years old! He was soon recruited into the Brazilian national team, too.

Pelé was average-sized but had speed, balance and vision. He had extraordinary control of the ball and was able to shoot powerfully with either foot. And his headers were legendary!

Pelé first came to international attention in the 1958 World Cup, when the 17 year old stunned the world with 3 goals in the semi-final and 2 goals in the finals, helping Brazil win the competition.

Pelé became hot property! Eventually the President of Brazil declared him a "national treasure" so that it would be harder for European clubs to entice him away!

Pelé played in 2 further World Cups, in 1962 and 1966, but in both was injured (possibly intentionally in 1966) and forced to sit out. In 1970 he was back on form and, with a great team alongside him, led Brazil to another victory. He retired in 1974, but was enticed briefly back into the soccer world by the New York Cosmos in 1976, helping to increase the popularity of the sport in America.

Pelé's eventual retirement in 1977 didn't slow him down! He was a Goodwill Ambassador with UNICEF, a United Nations ambassador for ecology and the environment, and Brazil's Extraordinary Minister for Sport.

In 1999 Pelé was named FIFA's "Co-Player of the Century", a title he shared with the Argentinian Diego Maradona. He was also named "Athlete of the Century" by the International Olympic Committee. It was a fitting recognition for this outstanding football player and inspirational man. 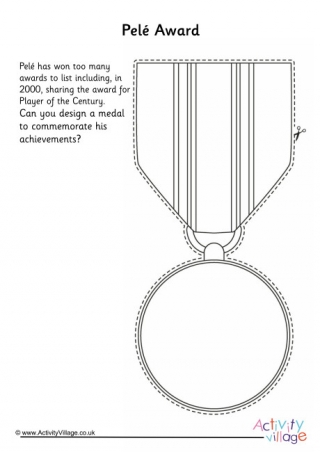 Pele won his first World Cup for Brazil when he was only 17 years old and has gone on to win many awards throughout his life.  Can the children design their own medal for him using our worksheet? 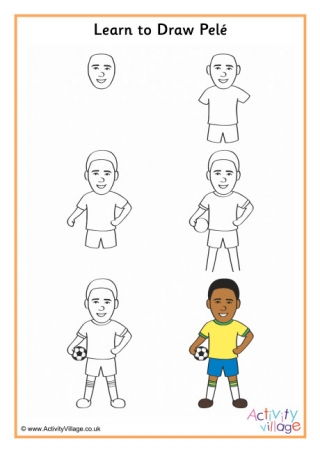 Kids can learn to draw Pele, perhaps the most famous footballer of all-time, with our printable step by step tutorial. 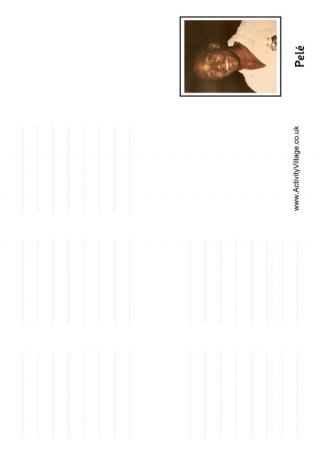 Print and fold this little booklet (using the instructions here) and use it to record what you've learned about Pele. Why not build up a miniature library on famous footballers or sports personalities? 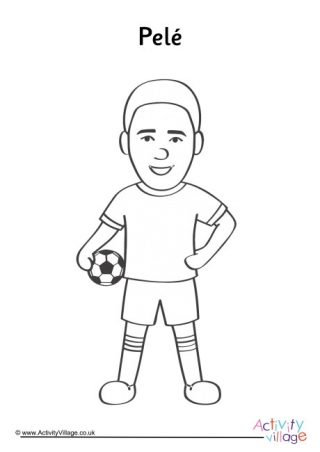 Many regard Pele as the greatest footballer of all time. Here's a fun cartoon-style picture of him for the kids to colour in. 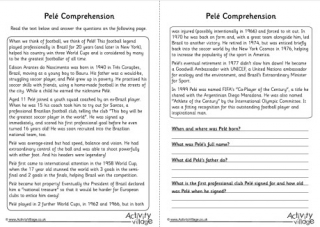 Read our short biography of Brazilian superstar footballer Pele, and then answer the questions... 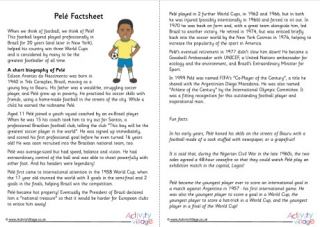 Here's a printable version of our short biography of Pele. Print it and use it with our other activities when learning about this great footballer! 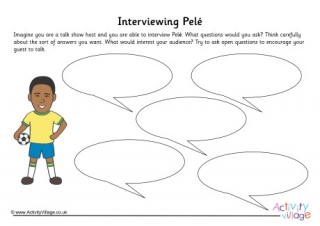 Imagine you had the chance to interview the man many consider as the greatest footballer ever - Pele. Think about what your audience would like to hear, and write some good open questions to encourage your guest to talk... 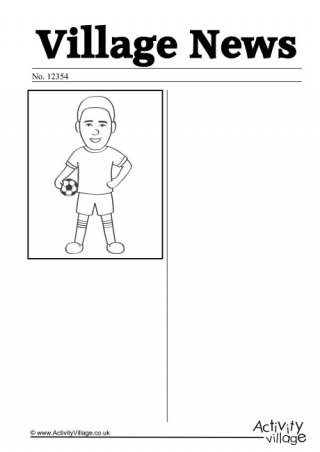 The kids can use our newspaper writing prompt to describe one of the three times Pele won the World Cup with Brazil, or to write about one of his other achievements. 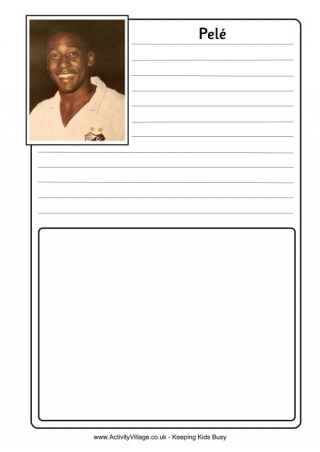 We have two notebooking pages for writing about Brazilian football legend Pele, both illustrated with his portrait and one with space for your own picture. 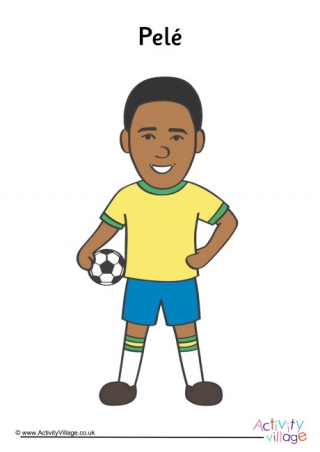 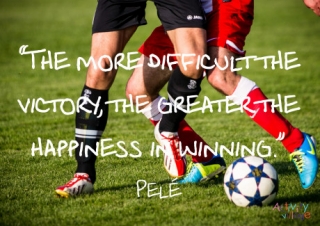 This inspirational poster featuring a quote by Pele is perfect for displaying in classrooms, sports clubs or at home to help encourage any young sportspersons. 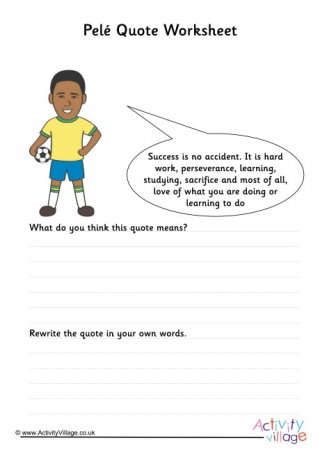 Can the children write about this quote by the famous Brazilian footballer Pele, explaining what they think it means, then rewrite it in their own words too? 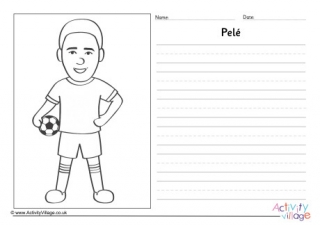 Many people think Pele is the greatest footballer of all time! The kids can use our fun story paper to write about his incredible life and achievements, and colour in his picture too (perhaps he's wearing his famous Brazil football kit?). 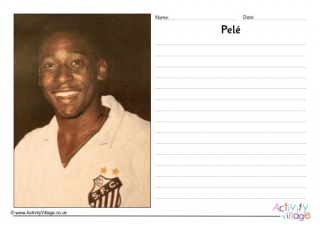 Did you know that Brazilian footballing legend Pele is the most successful league goal scorer in the world? Write down some more facts about him on our story paper, featuring a photo of the great man himself. 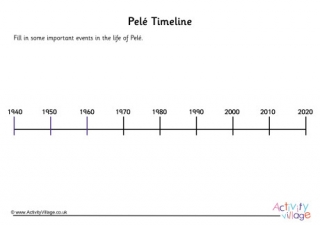 Can the children use our Pele timeline to fill in the important events in the life of the Brazilian footballer? 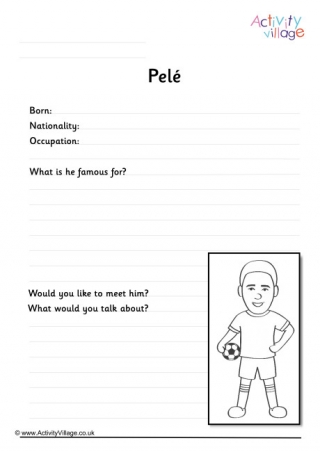 Learn about the famous Brazilian footballer, Pele, and fill out our fun printable worksheet. 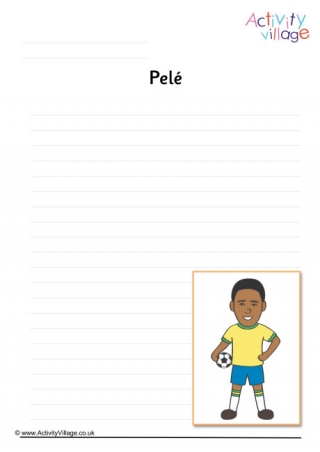 Write about Pele, perhaps the most famous footballer of all time, with our printable writing page. 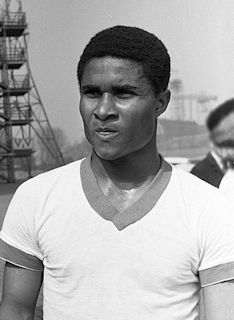