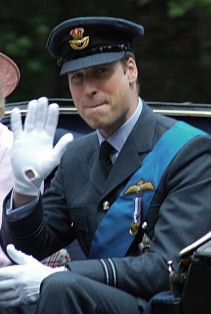 Prince William, Duke of Cambridge, is the grandson of Queen Elizabeth II and son of Prince Charles and Diana, and therefore is second in line to the British throne.

Prince William went to Eton and then on to St Andrew's University, where he met his wife, Kate Middleton, whom he married in April 2011. After graduating he joined the military, becoming a pilot and then getting his helicopter wings too; he served as a full-time pilot with the Search and Rescue Force until 2017  when he left to assume a more active role in royal duties.

Prince William first went on a royal tour in 1983 at the tender age of 1, and he has been travelling with and for the royal family ever since, especially since turning 21, and is involved with many charities and causes. He loves sport, playing polo, and is a keen football fan.

Using our fun printables, kids can learn to draw their own picture of Prince William, colour in our fun colouring page, print our poster or try to fill in the gaps on our worksheet. 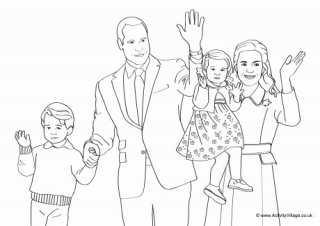 Copy each step carefully, and soon you will learn how to draw Prince William, Duke of Cambridge, for yourself! Here's a simple colouring page of Prince William, Duke of Cambridge, for younger kids to print and enjoy. I think many of us would love the chance to interview Prince William! As well as being second in line to the British throne, he worked as a helicopter pilot, does lots of charity work and has a lovely family too. Did you know that the Duke of Cambridge was christened William Arthur Philip Louis?  We hope the kids enjoy our fun Prince William mask, ready to download and print below. Here's a fun poster of the handsome Prince William, Duke of Cambridge, for kids to display, or perhaps to use as the front page of a project, or to cut out. 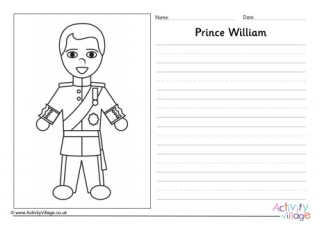 Use our Prince William story paper to write a report about the popular Prince, or you could write a creative story about his adventures flying his helicopter or performing his Royal duties? Find out some interesting facts about Prince William, Duke of Cambridge, to complete this worksheet. Would you like to meet him? What would you talk about? 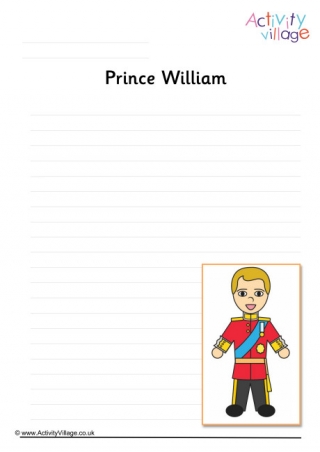 Here's a useful writing page with a fun picture of Prince William. Write down some interesting facts about the Prince, or maybe write a letter to him? Our lovely paper doll for Prince William and the Duchess of Cambridge remains popular even though their Royal Wedding has been and gone, and they now have three lovely children! A royal baby is always headline news. Children can write their own front page story with our Will and Kate new arrival newspaper writing prompt.