Did you know that the robin is the UK's national bird? Everyone is cheered up by the sight of a robin in the garden in the winter, with their distinctive red breasts and pretty song, and they are often associated with Christmas these days, appearing on Christmas cards. 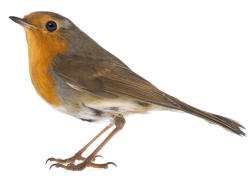 The robin is a member of the thrush family and related to the blackbird and the nightingale. It's easy to spot one of these cute birds, with their brown feathers on top, a white belly and their famous red breast. Male and female robins look very similar, but young robins are mottled gold and brown and do not have a red breast.

Robins are omnivores, eating fruit and berries, and also small insects and spiders. Their favourite food is usually mealworms!

Although we associated robins with Christmas,  it is possible to see robins all year round in the UK, and you can spot them in parks, woodland, hedgerows and often in our gardens. Even if you can't see a robin, you might be able to hear one. They have an unusual alarm call when in danger, a rapid 'tick, tick, tick' sound, and their usual song is a pleasant warbling tune in a higher pitch than a blackbird.

Robins might look cute, but these are fierce birds who will fight aggressively to defend their own territory. It's not unusual for a male robin to hold the same territory for his whole lifetime.

A female robin is allowed into a male's territory during the breeding season and will make a nest of dead leaves and moss. Robins lay between four and six white or faintly bluish speckled eggs after the end of March, and the female will incubate the eggs for up to 15 days. The male provides food for the young chicks once they have hatched.

We've got some lovely robin crafts that you can enjoy with the kids, as well as a collection of robin colouring pages and robin printables for the home and classroom. Explore the links below to discover all... 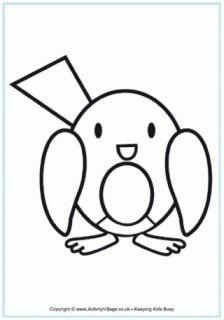 Robin Colouring Pages
Print and enjoy these robin colouring pages for kids, perfect for winter or Christmas, or a bird...

Robin Crafts
We've always loved the little robin with his pretty red breast, who is such a welcome site in... 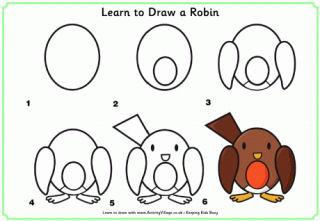 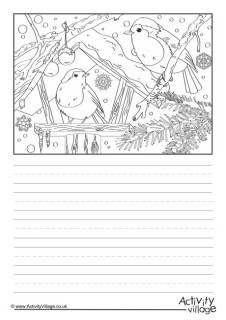