Sadako Sasaki was a Japanese girl who lived in Hiroshima, in Japan. In August 1945, when she was two year's old, the atomic bomb was dropped about one mile away from her home. She and her family managed to escape, although her grandmother ran back to fetch something from their house and was never seen again. 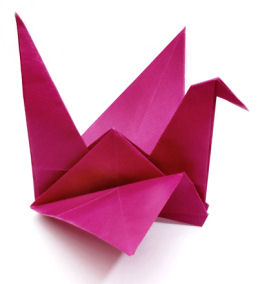 "I will write "peace" on your wings, and you will fly all over the world".

Sadako had a normal childhood and was a very good runner. Her class, which won the school's relay race, was very proud of her running skills. But it was during a running race that she first fell ill, when she was 11 year's old.

Sadako is in the middle of the front row

When she was 12, in 1955, her illness became worse and she was diagnosed with leukaemia, a cancer which affected many children who had been exposed to radiation because of the atom bomb. Her family was told that she would have less than one year to live, and as she grew more ill she was put into hospital. 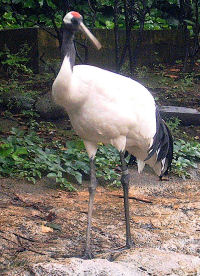 A friend told her about an old Japanese legend which says that if you fold 1000 origami cranes, you will be granted a wish. The crane is a Japanese symbol of long life (or longevity).

Origami cranes are very beautiful, and fun to fold. You can learn how to fold an origami crane at Activity Village. 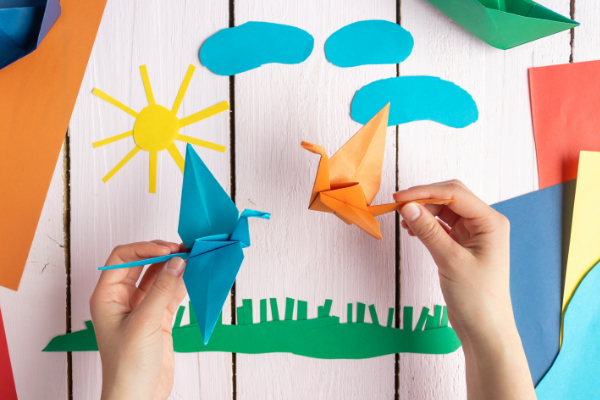 Sadako started to fold her own cranes...

She didn't always have origami paper, so she used whatever she could find - newspaper, medicine wrappings, and scraps of wrapping paper from get well gifts. She folded and folded. Some people say that she folded over 1000 cranes before she died, but others say she only managed to fold just over 600. We don't know what the truth is, but we do know that sadly Sadako didn't manage to fight off the terrible cancer. She never gave up and was courageous and cheerful to the end. In October 1955 she died, peacefully, in the hospital. 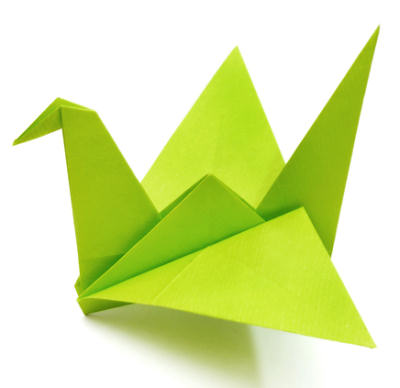 In memory of Sadako...

The children in her class were very sad, and decided to try to raise money for a special memorial for Sadako and other children who had died because of the atomic bomb. They wrote and published a book about Sadako, and they sent letters to schools all over Japan. It took them 3 years to raise enough money to build the Children's Peace Monument, in Peace Memorial Park, Hiroshima. It has a statue of Sadako on the top, as well as an origami crane. At the bottom of the statue there is a plaque which has a message from the children, which reads: 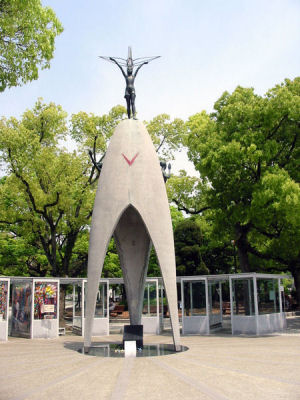 The Children's Peace Monument was officially opened on Children's Day (5th May) 1958.

Every year, thousands of children come to the memorial and leave their own folded origami cranes in memory of children who have died because of war, and as a prayer for peace. If you look carefully at the picture above you can see thousands of cranes protected by the white structures around the edge of the memorial. 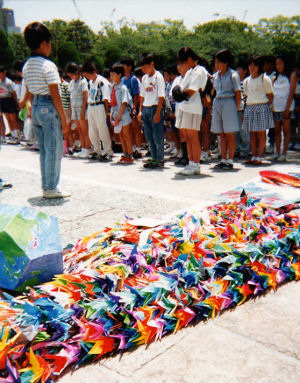 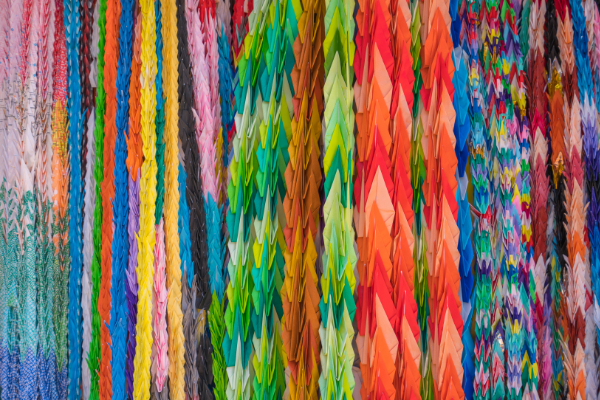 Strings of folded origami cranes - so pretty and colourful!

There is also a statue of Sadako in Peace Park, Seattle, USA: 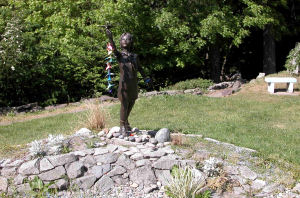 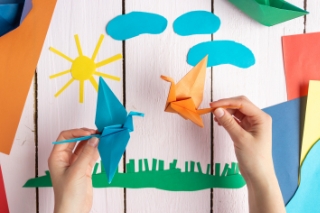 The crane is a traditional origami model which has been folded for hundreds of years. The crane stands for long life and good luck, and some people think that if you fold 1000 cranes you will be granted a wish! 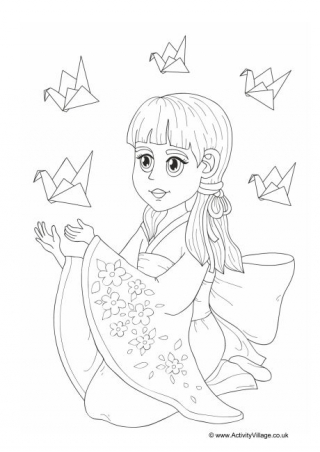 Colour in this lovely colouring page of Sadako Sasaki as she flies her origami cranes around the world with peace on their wings. 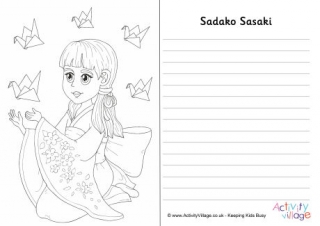 When you've learned a little about Sadako Sasaki here at Activity Village, and perhaps done some of your own research, you could use this story paper to write about her in your own words.

"Let there be peace on Earth
Let it begin with me..." 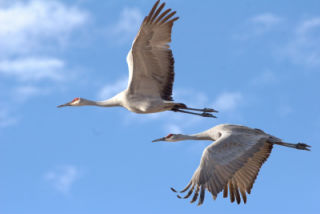