Saint George was the son of a Christian nobleman, born around 275-285 AD in the Roman province of Syria Palaestina. He was raised as a Christian and became a Roman soldier, working for the Emperor Diocletian in Nicomedia and rising to the rank of Tribunus.

Diocletian worshipped the Roman Gods and in AD 302 he issued an edict that every soldier must make an offering to the Roman Gods. Christian soldiers who refused to do so must be arrested. George insisted that he would remain Christian, even though Diocletian tried to bribe him with promises of land, money and slaves.

Eventually Diocletian decided reluctantly to execute George. Before he was arrested George gave all his money away to the poor, and he went to his death bravely, even though he was tortured horribly.

Saint George is the patron saint of England and many other countries. He is most well known for his part in the story of "Saint George and the dragon".

Saint George and the Dragon

There was once a city called Silene. The people of Silene were not Christians but they were happy enough, going every day to draw water from a nearby spring and living a simple life. One day, however, a dragon decided to make its nest by the spring and life became very difficult for them! Many men tried to fight the dragon or chase it away, but they all failed.

As they had to have water, the people of Silene came up with a plan. They would distract the dragon by taking him a sheep every day, for a meal. While he was busy eating, they quickly took the water they needed.

Everything worked fine for a while, but one day they didn't have any more sheep to offer the dragon! They became more and more thirsty and eventually, in desperation, they decided to take the dragon a young girl instead. Lots were drawn to see which young girl would be chosen each day.

One day, Silene's princess was the chosen maiden! The king begged for his daughter to be spared, but nobody listened, and the princess was dragged off to meet the dragon like the other young girls before her.

While the princess stood before the dragon, trying to be brave, Saint George rode by on his horse. Seeing the pretty princess and realising the situation, he made the sign of the cross (to show he was a Christian), bravely fought the dragon and rescued the princess! The citizens were so impressed with his bravery that they converted to Christianity. 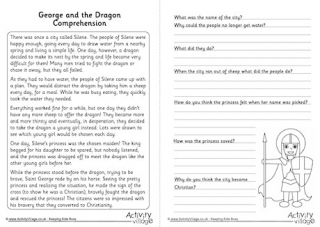 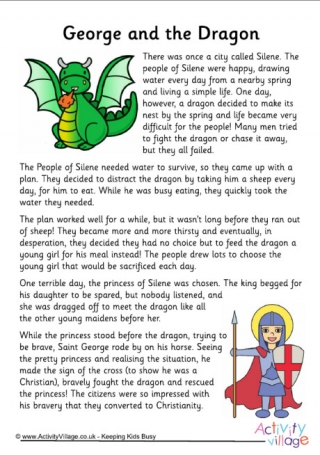 Read the story of brave George and the dragon, told simply here for children. 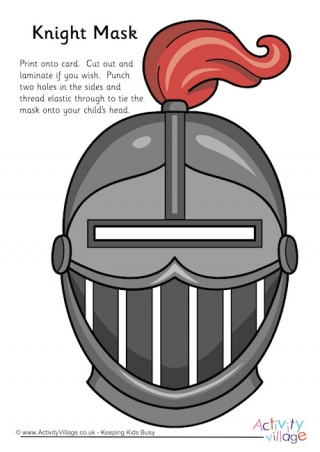 Kids can dress up as a knight with the help of this fabulous knight mask. Just print onto card, cut out carefully and laminate if you wish for repeat use. Don't forget to cut out the eye section! 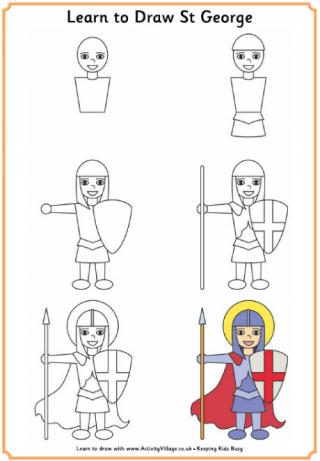 Print out our fun step by step drawing tutorial for kids. Just follow along (it's great copying practice) and soon they will learn how to draw their own picture of Saint George, patron saint of England! 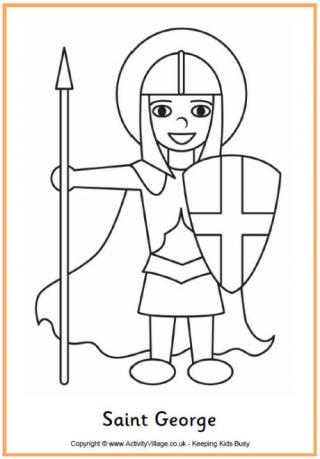 Here's a fun colouring page of Saint George for younger kids. Make sure that his shield has a white background and a red cross! 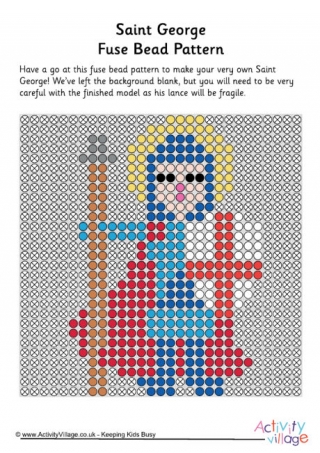 Here's an excuse to get out the hama beads - to make your very own Saint George! This quite complicated design uses a large square and will need to be treated carefully to keep the lance strong. 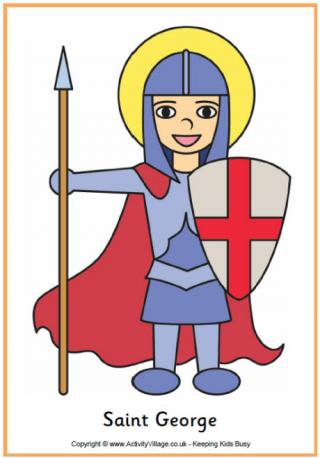 Here's a printable poster of Saint George, designed for younger kids, and bright and colourful! Print it out for St George's Day, perhaps, or stories of St George and the dragon. It also makes a useful front cover for a project. 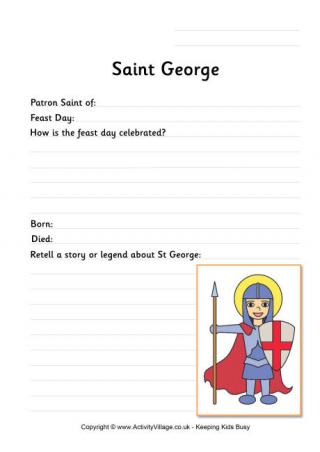 Research some interesting facts about Saint George and fill them in on this worksheet. 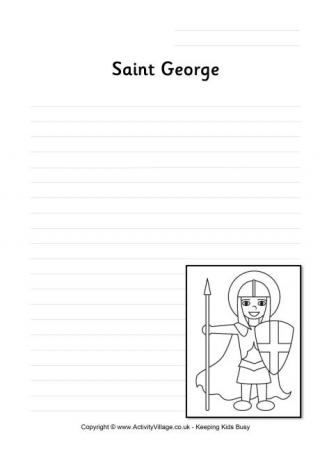 Use this printable writing page to capture what you've learned about Saint George, or perhaps to retell the story of Saint George and the Dragon. 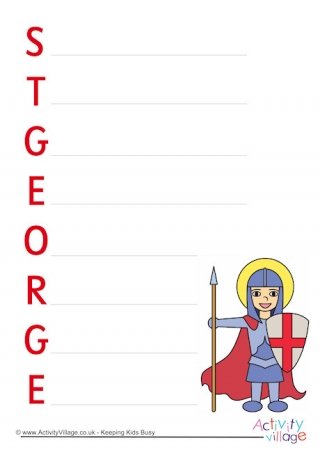 Write a poem dedicated to St George, patron saint of England, on one of our St George acrostic poem printables. The pdf file below has four different versions for you to choose from. 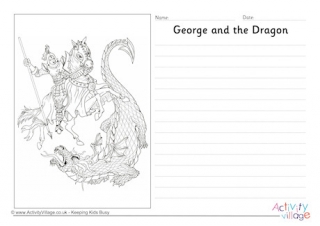 This George and the Dragon story paper is perfect for older children to write their own version of the story, or perhaps take dictation. We've included a picture for them to colour in. 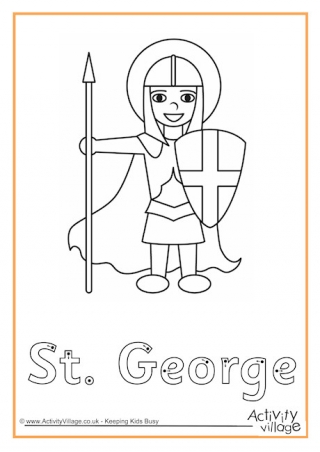 Here is some St. George's Day learning for younger children. They can get a feel for letter shapes by tracing the letters to spell out St. George. 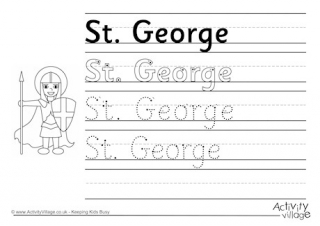 Practise handwriting and learn about how to write names and titles with this St. George handwriting worksheet. 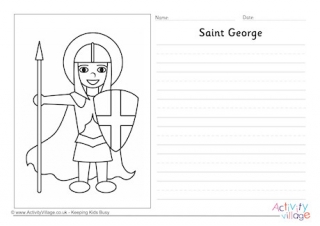 Kids can write their own version of the story of Saint George and the Dragon - or just write some notes about Saint George himself - using our fun story paper printable and colouring page. 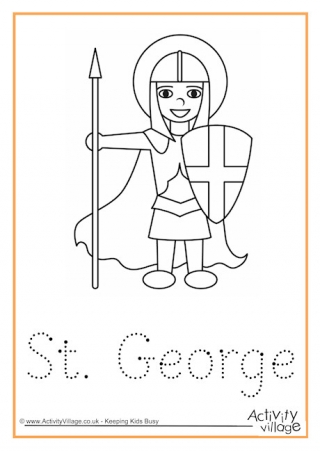 Get some pencil skills practice this St. George's Day by tracing the letters to spell out St. George and colouring in the picture. 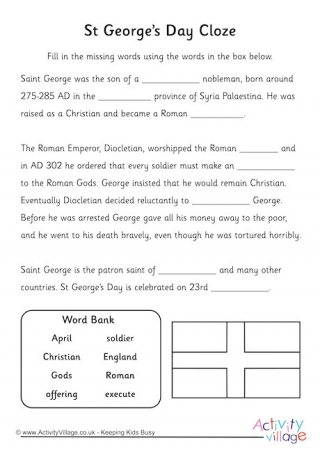 This cloze (fill in the blank) activity tells the story of Saint George, patron saint of England and many other countries. Children will be learning his story as they fill in the missing words. 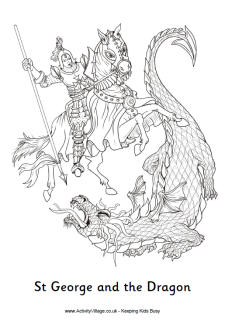