Sebastian Coe (1956 - present) (now a Baron and therefore referred to as Lord Coe) won the 1500 m gold medal at the Olympic Games in 1980 and 1984, and set eight outdoor and three indoor world records at a time when Britain dominated the middle distance events with three athletes, Sebastian, Steve Cram and Steve Ovett.

When he retired from athletics he became a Member of Parliament and then a life peer. He headed up the London bid to host the 2012 Summer Olympics and, after the International Olympic Committee announced London as the winning bid, became the chairman of the London Organising Committee for the Olympic Games.

Fun fact: Seb ran his first "official" race at 12, and, when his father saw how much potential he had, he became his coach.

"Quite simply the Games are the biggest opportunity in sport this country has ever had. It is one that we must not squander.”
Lord Coe 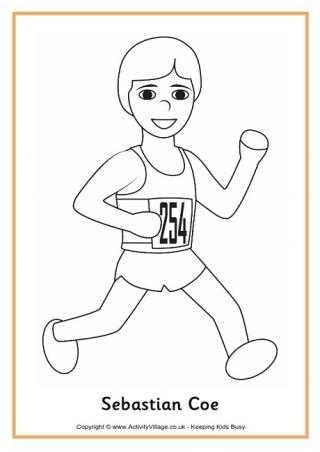 Sebastian Coe was an Olympic gold medal winning athlete in the 1980s, before he became an MP and then involved with London 2012. Here's a fun colouring page to print. 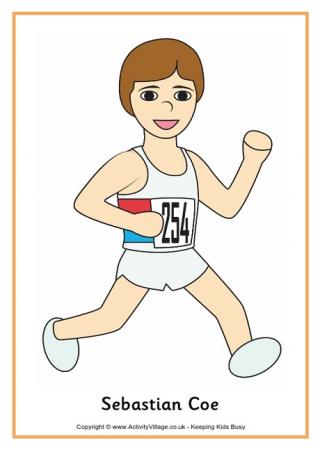 Print and display this fun poster of Sebastian Coe, middle distance athlete and Olympic gold medal winner, MP, Baron and now Chairman of the Olympic Organising Committee for London 2012! The poster also makes a good cover for a project... 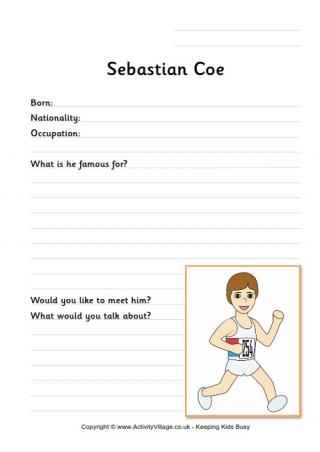 Encourage the kids to find out the facts they need to fill in our fun worksheet on Lord Coe. 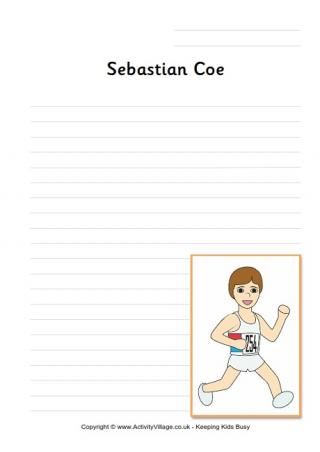 Enjoy these printable writing pages with a fun illustration of the British athlete of the 1980s, Sebastian Coe.