Learn a little about this amazing tennis player, Serena Williams, who has been wowing us all with her skill, power and athleticism since she first became "number 1" in women's tennis in 2002, and enjoy our activities with the kids. 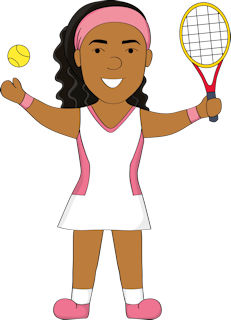 “Everyone’s dream can come true if you just stick to it and work hard.”

“I always believe I can beat the best, achieve the best. I always see myself in the top position.”

A Short Biography of Serena Williams

Serena Williams (1981–) is one of the world’s greatest female tennis players. For nearly 25 years she has excited audiences with her immense talent and skill. She currently has 39 Grand Slam titles (23 singles, 14 doubles and 2 mixed doubles) and has won both the Australian Open and Wimbledon singles title seven times.

Serena Williams was born in Saginaw, Michigan, USA, in 1981 to Richard Williams and Oracene Price. She is the youngest of five sisters (three half-sisters from her mother’s side, and her sister Venus who is just 15 months older).

Richard Williams had worked as a tenant farmer in Louisiana. He wanted a better life for his daughters and began teaching them tennis at the age of four. When the family moved to Compton, a troubled suburb of Los Angeles, the girls recognised that to succeed in life they needed to work hard. They began practising tennis for two hours a day and would enter tournaments to test their skill. For a time, the girls were educated at home so they could focus on their tennis training.

When Richard invited top tennis coach Rick Macci to watch his daughters play, Rick was so impressed by their talent he invited them to study at his academy in Florida. Soon after, the family relocated.

By the age of 10, Serena was the top US junior player for her age group. She turned professional at 14 and by 16, was number 99 in the women’s world rankings. The following year, she won the mixed doubles tournament at Wimbledon and the US Open, reaching a ranking of 20.

Serena graduated from high school in 1999, and in the same year won her first Grand Slam singles title at the US Open, as well as the doubles title with her sister Venus at the French Open and US Open. Serena and Venus continued to dominate in the women’s doubles – winning Wimbledon and an Olympic gold in 2000, as well as the Australian Open in 2001.

Serena became world number 1 in 2002. Venus was at number 2 – they were the first siblings to have the top two tennis rankings! Serena won the French Open, US Open and Wimbledon titles, beating Venus in all three finals. The matches showed her competitive streak – regardless of who was on the other side! The sisters also won the Wimbledon doubles that year.

Serena had more difficult times in 2003, however, when she took time out to recover from a knee injury and the tragic death of her half-sister, and her ranking dropped to 139. But by 2007, Serena was back to her best. After winning the Australian Open in 2007 and the US Open in 2008, as well as an Olympic gold and Wimbledon in the doubles, Serena regained a ranking of number 2 (and then 1 the following year). She had to take a break again in 2011, however, when doctors discovered a blood clot on one of her lungs. But nothing seems to hold Serena back! In 2012, she returned to form, winning the US Open, Wimbledon and Olympic gold in singles, and Wimbledon and an Olympic gold in doubles.

2015 saw her take all four Grand Slams again, and in 2017 she became the oldest woman to win a Grand Slam (the Australian Open) at the age of 35 – her 23rd Grand Slam singles title. Serena later revealed that she had been eight weeks pregnant at the time. She gave birth to her daughter Alexis Olympia in September 2017 and was back on court just months later.

Off-court, Serena is known for her outgoing personality and her love of fashion. She attracted much attention at the 2002 US Open, for example, when she wore a short black catsuit that she had helped design. Serena launched her own line of clothing – ‘Aneres’, which is Serena backwards – in 2004.

Serena published her first autobiography, Queen of the Court, in 2010, and a documentary about her life, Being Serena, was also aired in 2018. Serena supports many charitable organisations, as well as her own, the Serena Williams Foundation, which has helped to build schools in Africa and to fund the education of underprivileged children in the US. Tennis ace Serena Williams has won over 30 Grand Slam titles! Here's a poster of her to display. Not only is Serena Williams one of the best tennis players of all time, she also has great style and even has her own fashion line! The kids can learn to draw her with our easy step-by-step guide. 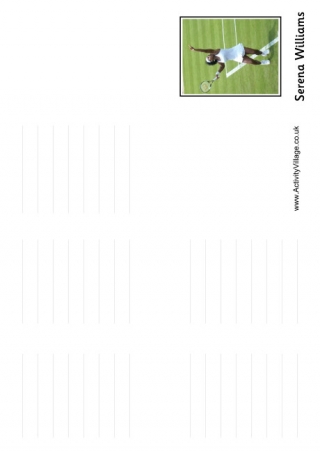 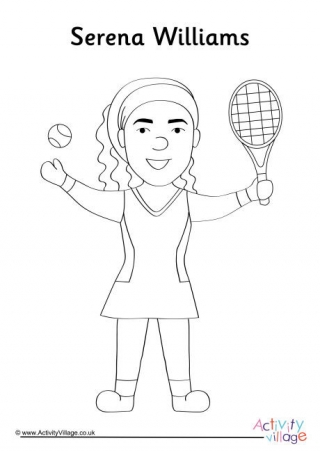 Serena Williams is one of the best tennis players of all time! The kids can enjoy colouring in this cartoon-style picture of her. 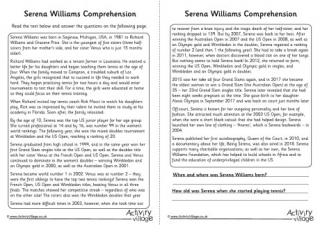 Comprehension worksheets can be fun to do, especially when they're about an inspirational sports person like Serena Williams! The kids need to read about her interesting life and career, then answer the questions at the end of the text. Serena Williams is one of the world's greatest female tennis players, but her life hasn't always been easy. Read a little about her inspirational story and her determination to succeed on our factsheet. Serena Williams is one of the greatest tennis players of all time. What would you ask her if you had the chance? Write down some top questions on this interview worksheet. 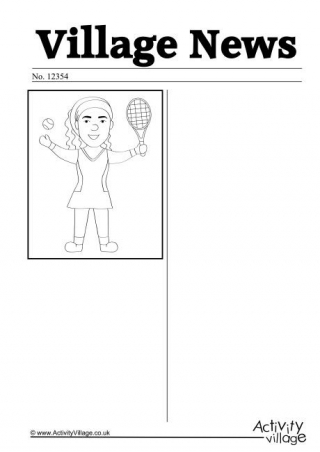 Use our newspaper writing prompt to write about a match that Serena Williams played in, or about her charity work perhaps? 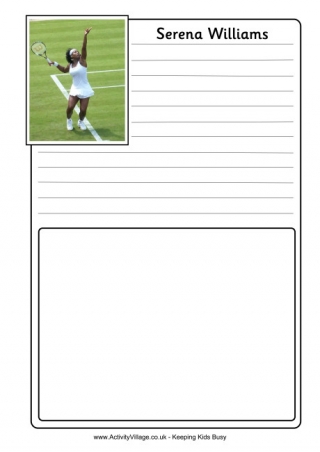 Choose from two designs of our notebooking page for top tennis player Serena Williams: the first with space for your child to draw or stick something on, and the second lined throughout. 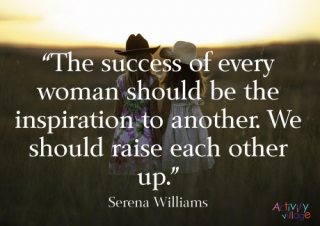 This quote poster features a positive message from Serena Williams about women 'raising each other up' - inspirational! 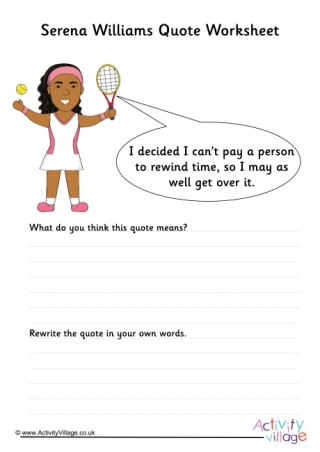 "I decided I can't pay a person to rewind time, so I may as well get over it." Can the children talk about the meaning of this quote by tennis legend Serena Williams, then show that they've understood the meaning by rewriting the quote? 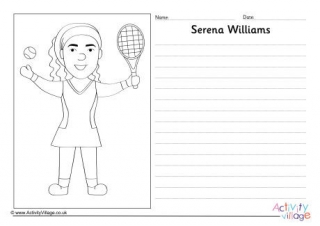 American tennis player Serena Williams has won 23 Grand Slam singles titles so far, and several Olympic gold medals. The kids can use this fun story paper to write about her remarkable career, or for a match report... Serena Williams has played in many thrilling tennis matches in her career, and she's taken part in 60 Grand Slam tournaments to date. Maybe use this story paper to write about one of them! 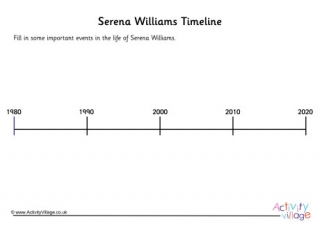 Tennis ace Serena Williams has had a remarkable career so far, and she's still winning matches now. Can the kids mark the important events in her life so far on this timeline? Choose from colour or black and white versions of this simple worksheet all about Serena Williams - ideal for younger kids. Use this simple writing paper - available in colour or black and white - to write about tennis star Serena Williams.