Learn a little about the African country, Sierra Leone, enjoy our fun facts, and print flags, maps and a range of useful printables and worksheets. 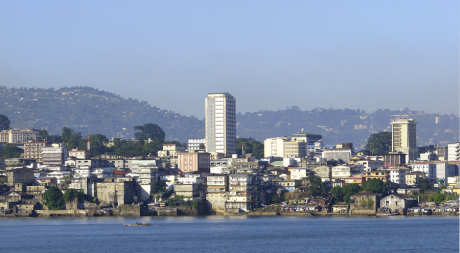 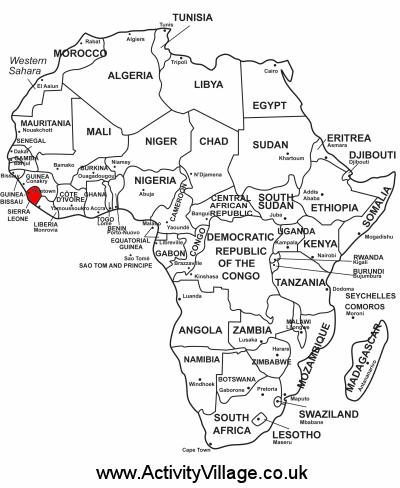 You can print this map here 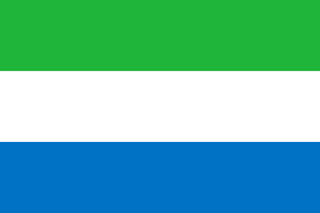 Sierra Leone's flag, in use since 1961, has a green, white and blue stripe. The green stripe stands for agriculture, mountains and natural resources. The blue stands for the hope that Sierra Leone and its capital city, Freetown (a natural harbour) will make a contribution to peace in the world. The white stands for unity and justice. 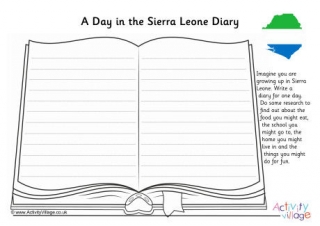 This fun worksheet asks the kids to imagine they are living in Sierra Leone, and to write a short diary entry describing a typical day there. 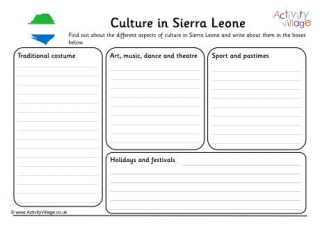 Ask the children to do some research into the different aspects of culture in Sierra Leone and then record what they find out on this guiding worksheet. 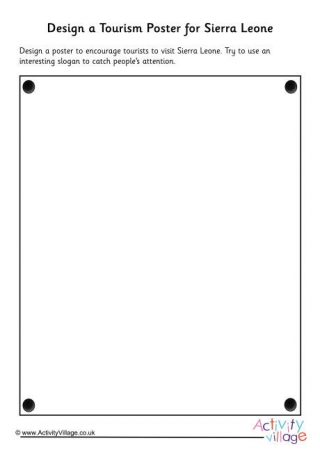 Grab some pens and design your own tourism for Sierra Leone, remembering to make it as eye-catching as possible! 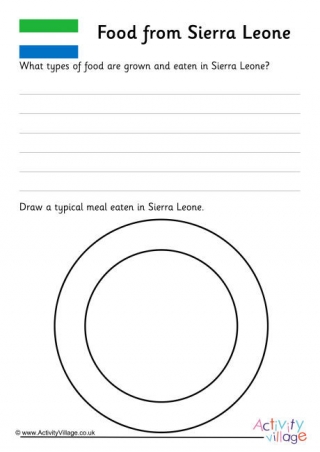 What would you eat if you were feeling hungry and lived in Sierra Leone? This worksheet asks you to find out about the typical food eaten there... 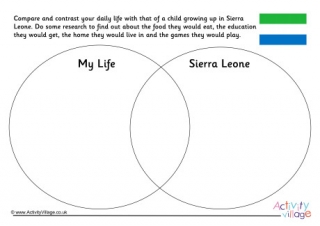 A Venn diagram is a great tool for brainstorming and creating a comparison between two or more objects, events, or people - in this case, comparing your own life with life in Sierra Leone. 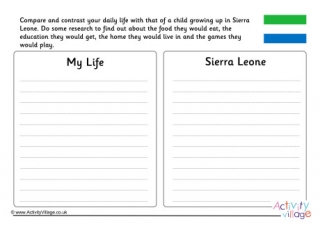 Use the template to compare and contrast two countries - Sierra Leone, and the country where you live. 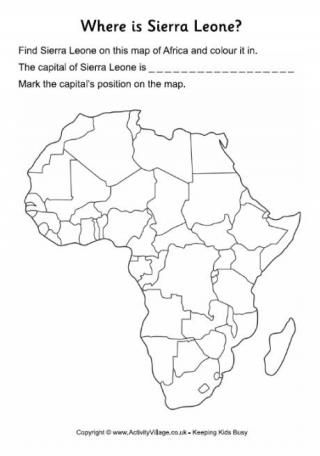 Choose from two versions of this worksheet - one with help for younger children, and one with a blank map of Africa for older kids. Find Sierra Leone and its capital city... 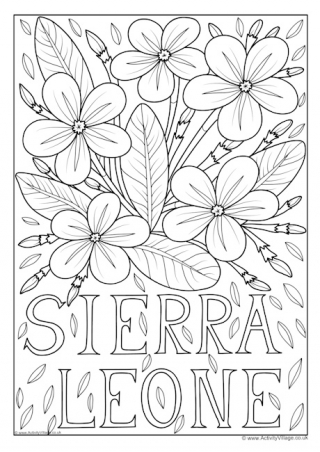 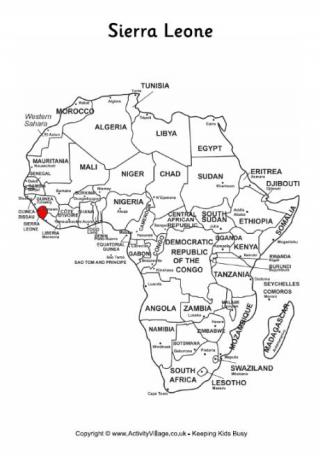 Print out this map of Africa showing the location of Sierra Leone for display, or for your project on the countries of Africa. 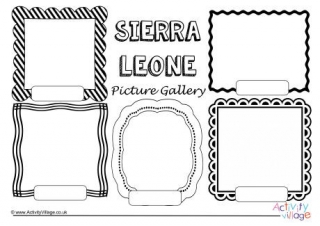 What will the kids choose to draw in the 5 spaces on this gallery for Sierra Leone? Ideas could include wildlife, famous landmarks or even the national flag... 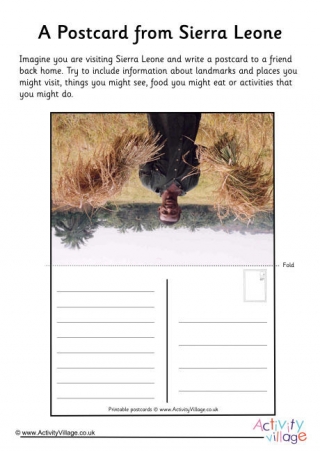 Do some research into Sierra Leone, then write about it on this postcard for someone back home to read... 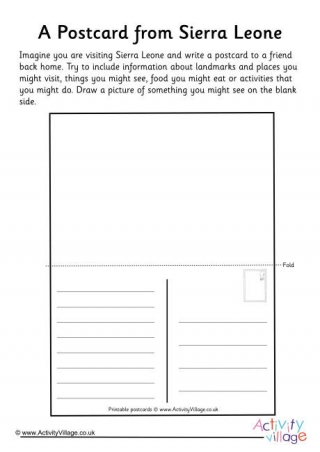 Practise writing skills with this Sierra Leone postcard, and draw a picture of Sierra Leone on the front of the postcard too! You could draw some scenery, wildlife or even the national flag? 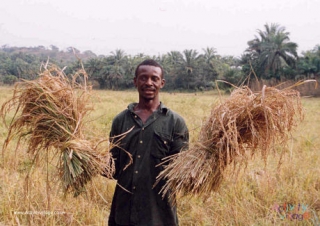 This printable poster of Sierra Leone is perfect for displays, or for sparking a discussion about what life might be like there... 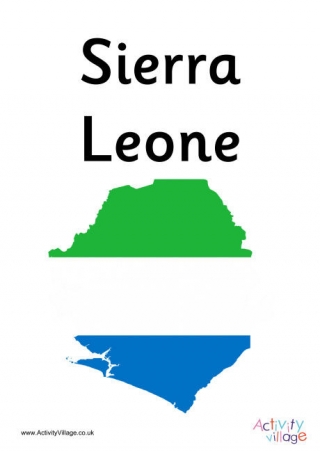 Green, white and blue are the colours of Sierra Leone's flag, and we've set them inside the outline shape of the country for a simple poster. 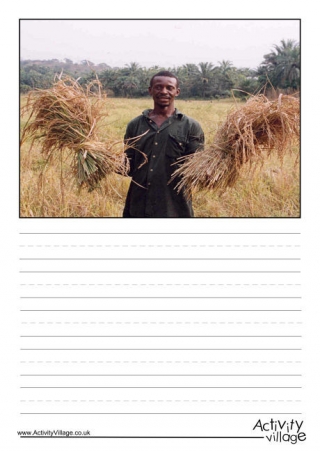 Perhaps the kids could write a story set in Sierra Leone with the man on the photograph as the central character? Choose from our lined version, or handwriting lines version below. 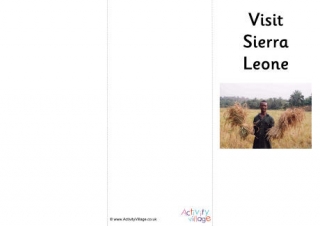 This foldable leaflet is just like the ones you find in travel agents and tourist information centres! Can the children write some interesting information about Sierra Leone inside it? 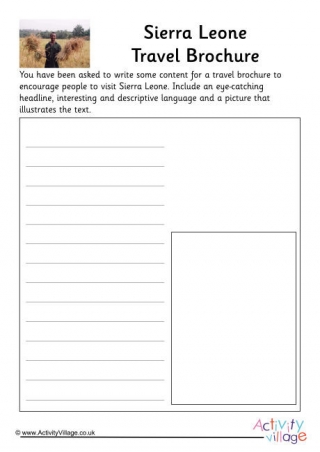 The kids will get to practise their descriptive and persuasive writing skills with this fun worksheet which asks them to write their own travel brochure content for Sierra Leone. 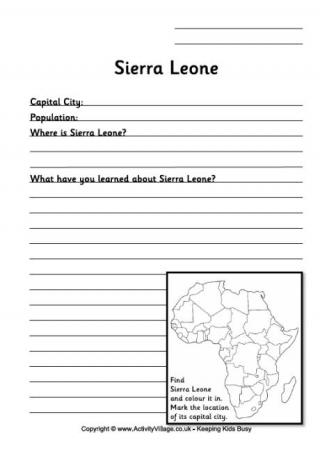 Use this printable worksheet to help you remember what you have learned about the African country Sierra Leone. 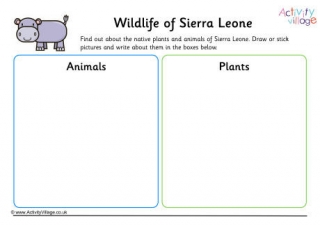 There's a funny hippo at the top of this wildlife of sierra leone worksheet! Can you find out about the other wildlife that lives in this fascinating country?