Here are some sudoku puzzles with a difference to keep children busy this summer. Instead of numbers we ask you to fit the summer themed words into the grids. 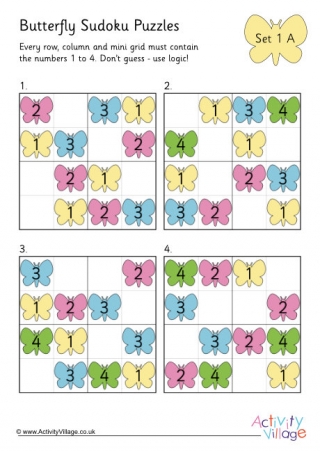 Here is a first set of very easy 4x4 sudoku puzzles for children, made all the more exciting with colourful butterfly numbers! These are perfect for your youngest children, and are effectively an exercise in writing in the missing numbers rather than using much reasoning to fill the grid. 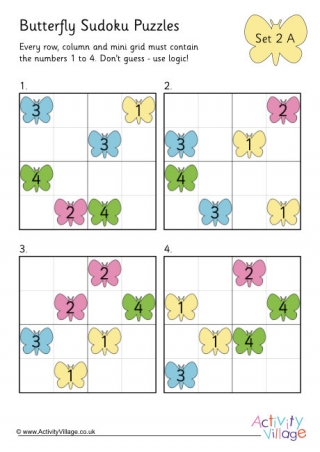 This set of butterfly sudoku is still using a 4x4 grid but children will need to start using their logic skills to work out how the numbers fit into the grid. Great fun! 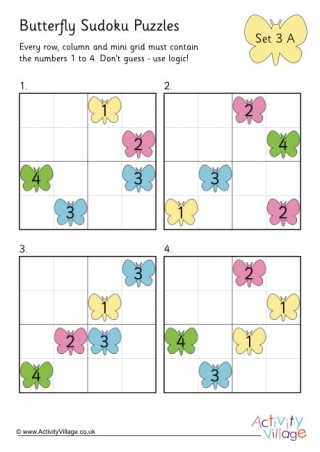 Have a go at these fun butterfly-adorned 4x4 sudoku puzzles with the kids - there are 12 in total in the pack, a pack of answers and a large display version for putting on the board too. 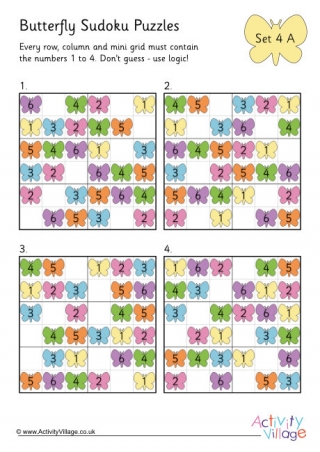 Here's our first set of 6x6 sudoku with the butterfly design. These are extra easy, great for total beginners and a fun way to learn about how sudoku works, ready for the next set of "harder" puzzles. 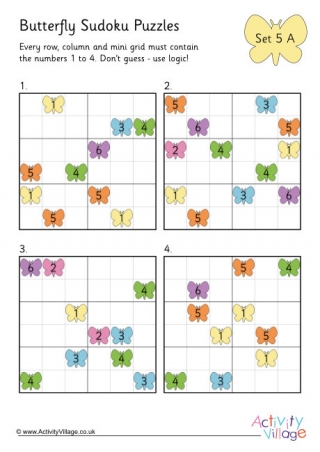 Each set of these butterfly sudoku puzzles are a little bit harder than the last. These pretty 6x6 grids provide a little bit of challenge for kids who are honing their skills! 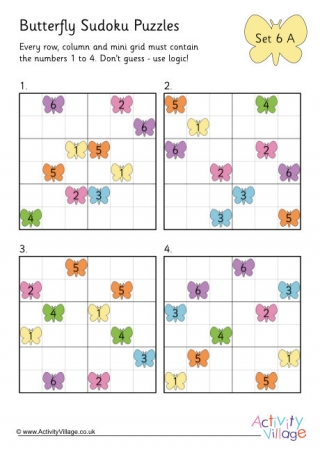 Here are 12 more butterfly sudoku puzzles for kids on 6x6 grids. These puzzles are getting just a little bit more tricky!

Get stuck into some tricker 6x6 sudoku puzzles with pretty butterfly design! There are 12 in this pack, available as a 3-page download or as a large display version for your screen or whiteboard. 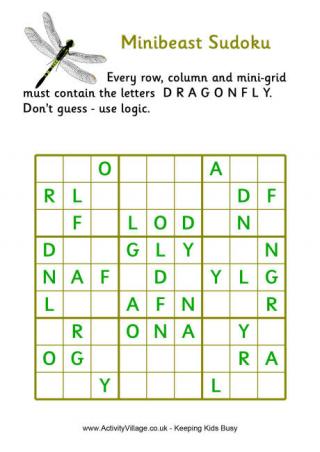 Here's a tricky word sudoku puzzle for our minibeasts theme, to keep the kids puzzling for a while. Can they fit the letters from the word D-R-A-G-O-N-F-L-Y into the grid, instead of the numbers 1 to 9? 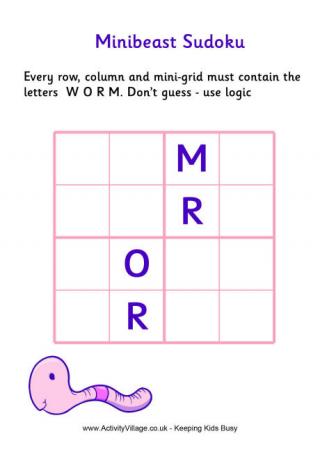 Younger children will enjoy fitting the letters from the word W-O-R-M into the sudoku grid - much more fun than numbers, especially with this cute pink worm to encourage you to get it right! 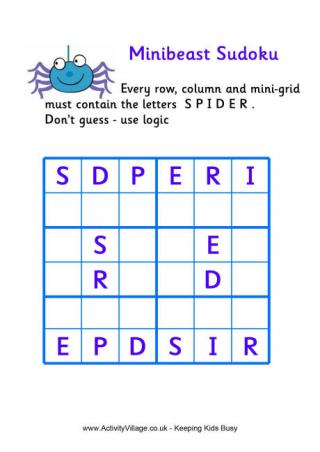 Who could resist this lovely spider sudoku puzzle? Instead of numbers, try to fit the letters from the word S-P-I-D-E-R into the grid.

Here's a tricky word sudoku for kids, featuring the 9 letter word sunbather. Place the letters in the grid instead of the numbers you are used to in a normal sudoku puzzle.

Here's a printable starter word sudoku puzzle (4 letters) for kids with a surf theme. Just place the letters in the grid instead of numbers.

Here's a printable word sudoku puzzle (using the 6 letters of the word bucket) for kids to puzzle over. Place the letters in the grid instead of the numbers in a normal sudoku puzzle.

Perfect for the Wimbledon fortnight, fit the letters into this tennis sudoku puzzle for older kids!

Here's one of our fun word sudoku puzzles for beginners, featuring the four letters which make up the word NETS.

Here's a slightly challenging word sudoku puzzle for kids with a tennis theme. Fit the six letters of the word RACKET into the grid. 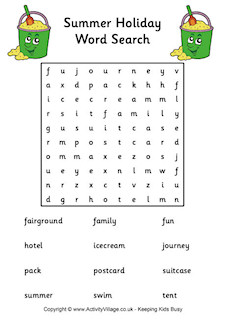