Taylor Swift (1989–) is an award-winning American singer and songwriter who has captivated the hearts of a generation. Taylor started her career as a country music artist before she moved into pop music. She has now sold over 40 million albums and more than 130 million singles worldwide and won many awards along the way. Find out more about this talented artist and enjoy our collection of printable resources with the kids. Taylor can also add acting to her string of talents. She made her film debut in 2010 when she played a leading role in the romantic comedy Valentine’s Day. She also played the voice of Audrey in The Lorax (2012) and had a small part in The Giver (2014). Taylor is also the face of many brands, including Cover Girl, Sony Electronics and Diet Coke, and has launched perfume fragrances.

“People haven’t always been there for me but music always has.”

A Short Biography of Taylor Swift

Taylor Swift was born in Reading, Pennsylvania, USA, in 1989, to Scott and Andrea Swift. Her father was a stockbroker while her mother raised Taylor and her younger brother, Austin.

As a child, Taylor loved to ride horses and to sing. She took part in shows and karaoke contests in her hometown. She also performed in musical theatre and travelled to New York for acting and singing lessons. When Taylor was 11, she sang the US National Anthem at a Philadelphia 76ers basketball game. Taylor always knew she wanted to be a singer. Her grandmother Marjorie Finlay was an opera singer, and Taylor loved to listen to her voice.

When Taylor was 12, she began playing the guitar. A computer technician had visited the family home to fix a computer, and taught Taylor three guitar chords. She loved country music and began practising hard and writing her own songs.

Taylor’s parents recognised her talents, and the family moved to Hendersonville, Tennessee, to be closer to Nashville, the country music capital. The following year, 14-year-old Taylor performed at The Bluebird Café in Nashville and caught the eye of Scott Borchetta, a record producer. He immediately signed her with his label Big Machine Records.

Taylor released her first single in 2006, titled ‘Tim McGraw’ after a famous country music singer. The song became a top 10 hit in the country charts, and her debut album ‘Taylor Swift’ went to number 1, selling more than 5 million copies. Taylor was just 16.

Taylor’s second album ‘Fearless’ followed in 2008 and became the most downloaded country album. Fearless won many awards, including the Grammy Award for ‘Album of the Year’, making Taylor the youngest artist in history to win the award.

In 2010, Taylor’s third album ‘Speak Now’ broke yet more records when it sold over 1 million copies in the first week. Two more albums followed – ‘Red’ (2012) and ‘1989’ (2014) – both selling more than a million in week one. Taylor had begun to experiment with pop tracks, too.  The singles ‘Shake it Off’ and ‘Blank Space’ from ‘1989’ topped the pop charts. This album also brought a Grammy Award for ‘Best Pop Vocal Album’ and Taylor’s second Grammy ‘Album of the Year’ award. At the time, Taylor was the first woman to win this award twice.

In 2017, her sixth album, ‘Reputation’, sold over a million copies in just four days. With every album release, Taylor keeps breaking her own records! She has now won ten Grammy Awards as well as a whole host of other accolades.

Aside from singing and songwriting, Taylor has used her fame to support many charitable causes. She has generously donated to help flood victims in the US, for example, and to fund cancer research. In 2013, she also opened the US$4 million ‘Taylor Swift Education Center’ in Nashville, to inspire young people to enjoy and participate in music. As Taylor says: “My life changed so completely when I discovered writing my own songs and playing guitar.” Taylor Swift has already won ten Grammy Awards - I wonder where she keeps them all?! Our fun worksheet lets the children design their own award to add to her big collection! Learn to draw the famous songstress Tayor Swift complete with her guitar, using our simple step by step instructions. Taylor Swift fans will love creating this little booklet with her picture on the front, then they can use it to write down lots of fun facts and information about her and her music. Music lovers will enjoy colouring in this picture of American singer-songwriter Taylor Swift. 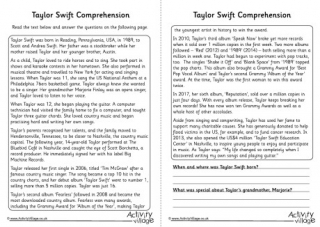 This comprehension is all about famous singer-songwriter Taylor Swift. The kids need to read the text first, then answer the questions about her. The kids might already know quite a lot about Taylor Swift, but they can still read our factsheet all about the famous singer and maybe find out a few more facts about her... You may have seen Taylor Swift being interviewed on talk shows before - well now it's your chance to ask her your own questions, with this fun worksheet... Perhaps the children could use this newspaper writing prompt to write about one of Taylor Swift's concerts or to talk about an award she's been given? Use this handy notebooking page for writing projects about Taylor Swift. You could copy down some song lyrics, write a report of a concert you've been to or watched on television, and draw your own picture of her too! Here's a fun poster of Taylor Swift, perfect for young fans of the American singer. She's holding her guitar, ready to perform one of her many hits! Can the children write about what this quote by popular singer Taylor Swift means, and then rewrite it in their own words? Kids can use our story paper to write about Taylor Swift and then colour her in...or they could copy out some of her song lyrics! This story paper features a photograph of the American singer-songwriter Taylor Swift. Use it to write down some facts you've found about her, or perhaps for some copy work of some of her song lyrics? Taylor Swift is still young, and she has already achieved a lot in her life and career! Ask the children to write down the important events in her life on this timeline. Kids can find out some fun facts about Taylor Swift, and then fill in this worksheet. What would they want to talk to her about, if they were lucky enough to meet her? We're sure that fans of Taylor Swift will enjoy writing about her using these printable writing pages - either in colour or black and white. Or maybe try writing your own song based on her style of music?