ALL NEW! Learn a little about the Cenotaph with your children, and download a poster, colouring page and comprehension activity to reinforce what you have discovered. 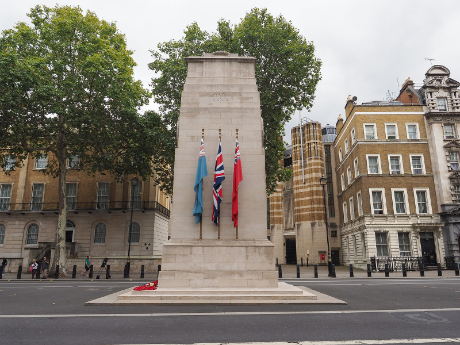 The word "cenotaph" comes from Ancient Greece. Ancient Greeks believed it was very important to bury their dead properly. When they couldn't, they would instead build a cenotaph - an empty tomb - in their memory.

In Great Britain, a decision was made early in the First World War that soldiers who died overseas would not be brought home, but buried near where they fell. That was hard for their families, who had no memorial for them at home. After the war, therefore, in 1919, it was decided that a huge victory parade would be held in London, and that a memorial would be built so that the soldiers marching in the parade could salute their lost comrades as they passed by.

Sir Edwin Lutyens, a well-known architect, was asked to design the memorial. The first Cenotaph was built quickly of wood and plaster, and was in place for the victory parade in July. Afterwards, over a million people visited the memorial and laid flowers there. On 11th November 1919 the first Remembrance Day ceremony was held there. The Prime Minister, David Lloyd George, walked out of Downing Street to place a wreath on the Cenotaph, and veterans marched past. 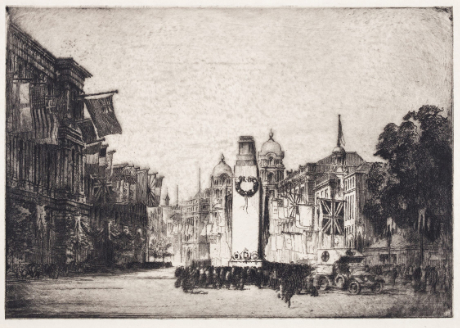 The temporary Cenotaph was so popular that the government asked Sir Edwin Lutyens to start work on a permanent stone Cenotaph. They decided to unveil it on 11th November 2020, Remembrance Day, when they held another special ceremony to bury the Unknown Warrior in Westminster Abbey to represent the many soldiers who had died from the British Empire.

A National Service of Remembrance

Since the Second World War a National Service of Remembrance has been held at the Cenotaph on Remembrance Sunday (the closest Sunday to 11th November) in Whitehall, London. The ceremony remembers and honours the contribution of all British and Commonwealth servicemen and women in the two World Wars and other conflicts since then.

Bands play patriotic music and there are prayers. When Big Ben chimes 11 o'clock, the nation falls silent for two minutes. The Queen and other members of the royal family lay wreaths at the base of the Cenotaph, followed by senior politicians and High Commissioners from the Commonwealth. Veterans then march past and salute the Cenotaph. 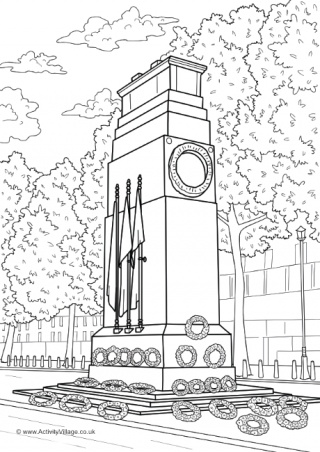 Colour in this picture of the Cenotaph in London. We've pictured it at the end of the Remembrance Day ceremony, with many poppy wreaths laid around its base. 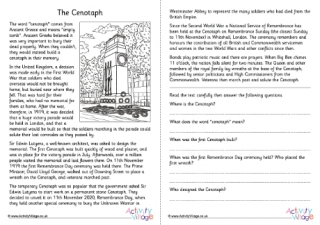 This Remembrance Day comprehension activity asks children to read about the Cenotaph (the same text as we have on our Cenotaph page here) and then answer the questions. The final question requires some creative writing. 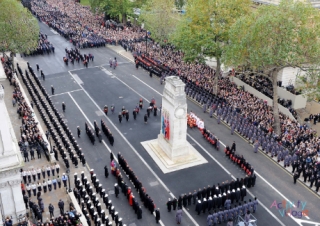 This aerial photograph of Whitehall provides an excellent overview of a Remembrance Sunday parade. Her Majesty The Queen lays a wreath on the Cenotaph while other members of the royal family, politicians and High Commissioners wait their turn. 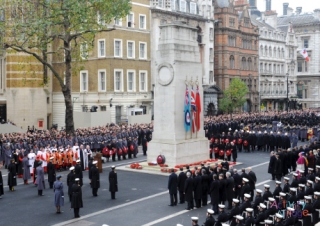 This photograph of a Remembrance Sunday service (taken in 2010) shows the British Royal Family (foreground), Members of Parliament (to the right and behind the Cenotaph), other dignitaries and servicemen and women laying poppy wreaths and paying their respects at the Cenotaph in Whitehall, London 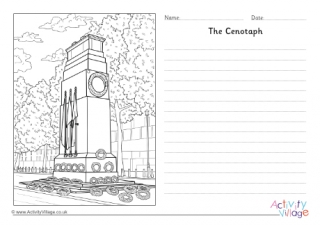 Use this Cenotaph story paper to write down what you have learned about the Cenotaph and the National Service of Remembrance, or Remembrance Day in general. We have two versions: one headed "The Cenotaph" and one blank. 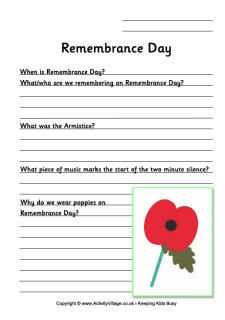