The Story of Diwali

Once upon a time there was a great warrior, Prince Rama, who had a beautiful wife named Sita.

There was also a terrible demon king, Ravana. He had twenty arms and ten heads, and was feared throughout the land. He wanted to make Sita his wife, and one day he kidnapped her and took her away in his chariot. Clever Sita left a trail of her jewellery for Rama to follow.

Rama followed the trail of glittering jewellery until he met the monkey king, Hanuman, who became his friend and agreed to help find Sita. Messages were sent to all the monkeys in the world, and through them to all the bears, who set out to find Sita.

After a very long search, Hanuman found Sita imprisoned on an island. Rama's army of monkeys and bears couldn't reach the island, so they began to build a bridge. Soon all the animals of the world, large and small, came to help. When the bridge was built, they rushed across it and fought a mighty battle.

When Rama killed the evil Ravana with a magic arrow, the whole world rejoiced. Rama and Sita began their long journey back to their land, and everybody lit oil lamps to guide them on their way and welcome them back.

Below you will find colouring pages and two types of story paper (lined and with handwriting lines) for each picture. Children can use the story paper to copy the story or write their own version. 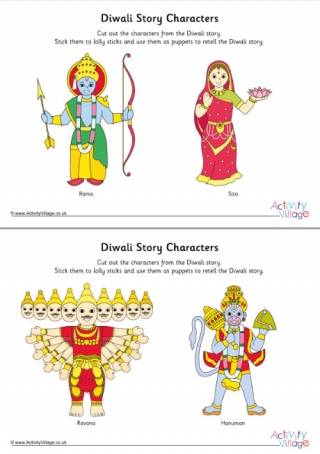 Cut out the four main characters of the Diwali story and use them as puppets to retell the tale... 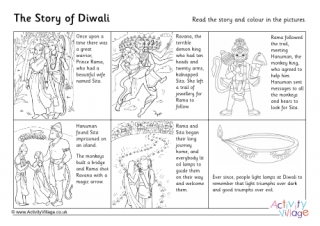 Read this condensed version of the Diwali story and colour in the little pictures, if you like. 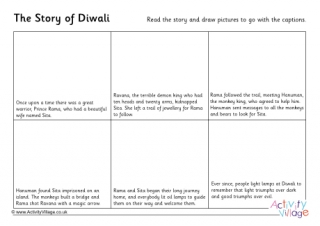 Read this condensed version of the story of Diwali, and draw your own pictures to match each caption.

Third in our series of colouring pages depicting the Diwali story, in this picture, Hanuman the monkey king, who has befriended Rama, has helped Rama defeat Ravana in a mightly battle and the royal couple are reunited.

This is the third in our series of story papers for the Diwali story.

In our final colouring page depicting the story of Diwali, Rama and Sita, now reunited, return home as their land rejoices. Such is the joy that everyone lights oil lamps and places them to welcome the royal couple safely home.

This is the fourth and final sheet in our series of story papers for the Diwali story.

Rama and Sita began their long journey back to their land, and everybody lit oil lamps to guide them on their way and welcome them back.

One of a series of colouring pages depicting the Diwali story, this Rama and Sita colouring pages shows the couple wondering in the woods before they are separated by the evil Ravana.

This is the first in our series of story papers for the Diwali story.

Once upon a time there was a great warrior, Prince Rama, who had a beautiful wife named Sita.

The demon king Ravana tricks Rama into leaving Sita alone, and then he captures her and takes her off in his winged chariot. The quick-thinking Sita leaves a trail of her jewellery for her husband to follow. Second in our series of colouring pages telling the Story of Diwali.

This is the second in our series of story papers for the Diwali story. 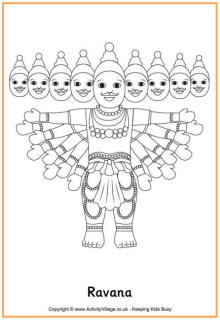 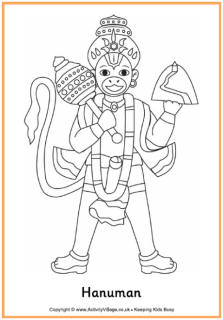 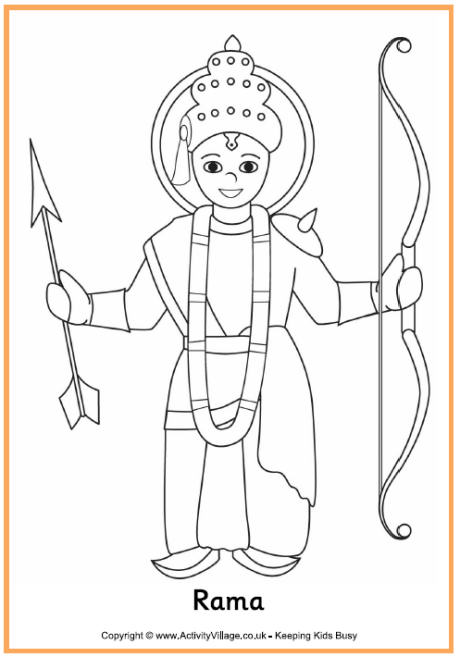 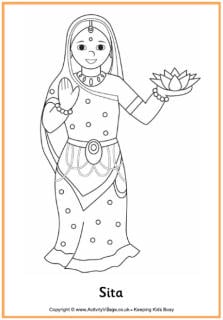 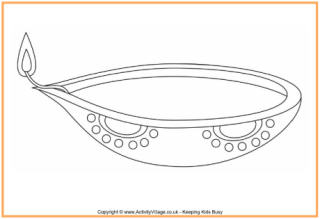 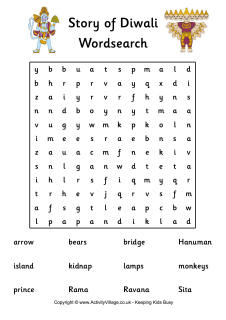 Find the words relating to the Diwali story in this word search puzzle.
Story of Diwali word search 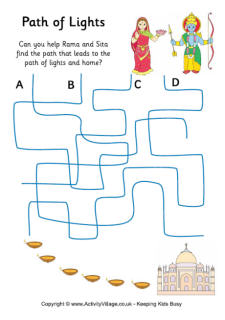